Joséphine Baker at the Panthéon: "My France is Joséphine"

Forty-six years after her death, Josephine Baker entered the Pantheon on Tuesday. The artist, the resistant and the anti-racist activist is now one of the great men and women of France… 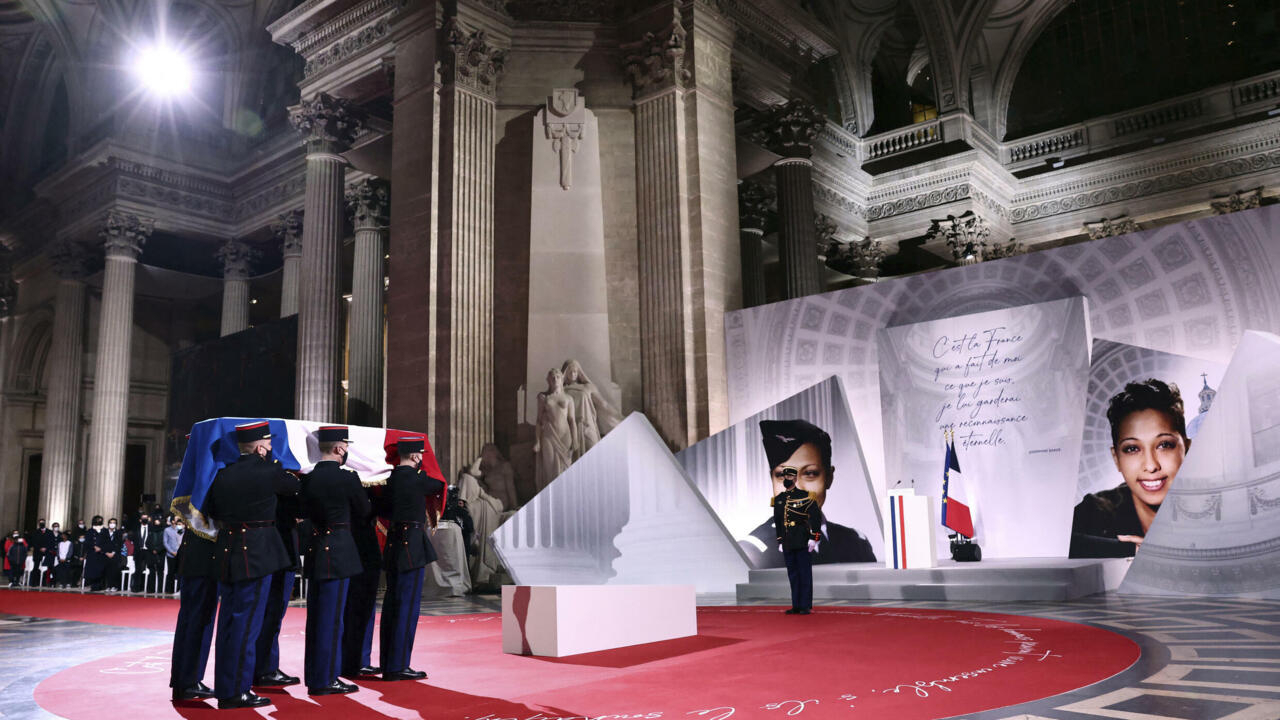 It is to the sound of the music of "Me back in Paris" that the entry ceremony of Joséphine Baker to the Pantheon begins Tuesday, November 30th.

Step by step, on a long red carpet, six members of the Air Force and Space go up rue Soufflot carrying a cenotaph covered with the tricolor flag.

In the stands, hundreds of children have their eyes riveted on the screens.

They are students from primary schools, colleges and high schools in France invited for the occasion.

"It's a rare event. It's an honor, it doesn't happen often," said Aliénor, in 3rd at Fleming College in Orsay.

"She achieved a lot for the French army, for her homeland. Her heart was beating for France", describes the teenager with admiration.

"She was a free and avant-garde woman. She broke the codes a lot", adds her comrade Elise.

"She fought for us"

For several weeks, these college students have been preparing for this ceremony. They studied the career of this artist, resistant and anti-racist activist who led all her life a long fight for more brotherhood. By discovering the details of this extraordinary destiny, some young people have even found a role model. "Today, we think about what she did for France. She fought for us, she was against racism. It is still very important", explains Hind, nine, of the school. Joséphine Baker from La Courneuve.

A few rows higher, the students of the Joséphine Baker school in Guémené-Penfao in Loire-Atlantique even wrote with the director of their establishment a song in tribute to the star of the day.

"The students are receptive. They got on well with this woman, her story and her exceptional life," says Eloise, their teacher.

These students from the # JoséphineBaker school in Guémené-Penfao in @loireatlantique perform a song written by their director in memory of #JosephineBaker.

A magnificent tribute that she would certainly have liked a lot.

Elena Robisch also traveled from the same region. Of American origin, but living in Nantes, she would not have missed this ceremony for the world. "I am very happy that France is honoring this woman. She is already known in the United States for her actions in favor of the rights of men and women, but this will make her known even more", she describes while waving a flag in the colors of the United States.

Captain Marion Buchet also underlines the exceptional nature of this event. A member of the Air Force, she admits to being personally touched by the entry into the Pantheon of Second Lieutenant Joséphine Baker, who wore the same uniform as during the Second World War. "There is a real recognition of what she represents. She is the perfect illustration that a woman can join the army and show bravery. With her entry, we recognize all the women who have had a historic impact. important ", summarizes this officer.

Captain Marion Buchet promotes the place of women in the army.

For her, #JosephineBaker is a role model: "She is the perfect illustration that a woman can join the army and show bravery. We recognize all those who have had a historic impact."

Throughout the ceremony, the songs of Joséphine Baker punctuate the course of the procession.

"I have two loves", "La petite Tonkinoise" or "C'est lui", her voice resonates in the streets of Paris, the city she loved so much and which made her famous in the 1920s. Jazz musician Sébastien Paindestre relishes this place given to music: "Joséphine represents what jazz embodies, this freedom".

A mapping is projected on the facade of the Pantheon, developing the four main facets of the life of # JoséphineBaker: the free artist, the resistant, the civil rights activist and the woman committed against racism in Milandes.

We hear his voice.

Inside the Pantheon, alongside officials and family, dozens of artists attend the symbolic entry of the former dancer and singer alongside the great men and women of France. The door of the Republican temple opens to make room for this icon of freedom. "Joséphine Baker enters here with all these artists who accompany her, all these artists who have loved jazz, dance, cubism, music, the freedom of those years", describes President Emmanuel Macron during his speech.

"She enters here with all those who, like her, have seen in France a land to live in, a place where one would stop dreaming of oneself elsewhere, a promise of emancipation. She enters here with all those who have chosen the France, who loved her and love her, carnally, who saw her stumble and continued to love her, who saw her on the ground and fought to raise her ", adds the president before concluding : "Each of us this evening murmurs this refrain, sounding like a hymn to love: 'My France, it's Joséphine'".

The homeland is more than grateful to this great lady.

#JosephineBaker has joined the great men and women of France.

"An example to continue to engage"

While the guests then head for the exit, actor François Cluzet is enthusiastic: "I really liked hearing the president say that fantasy has entered a place like this which may seem dark. That's wonderful !".

One of Joséphine Baker's adopted sons, Brian Bouillon does not hide his satisfaction either: "It was a memorable ceremony".

With fun, just like his mother was, this member of the Rainbow Tribe thumbs his nose at the news.

He does not hesitate to point the finger at the polemicist Eric Zemmour who chose the day of this ceremony to announce his candidacy for the presidential election: "My mother has always sung 'I have two loves', but not 'J' have two Zemmour '".

A few minutes earlier, President Emmanuel Macron had not failed to scratch the extremes in his speech by insisting on the fact that Josephine Baker, born American, was certainly the "most French" of all.

His son hopes this message will be heard.

"There is hope and sunshine in this somewhat dark period. I hope my mother will remain an example who can give everyone a form of energy to continue to engage and have ideals" he insists.

"That's what she tried to do until the end."