His Highness Sheikh Hamad bin Mohammed Al Sharqi, Member of the Supreme Council and Ruler of Fujairah, witnessed the "Martyr's Day" ceremony, which took place yesterday, in the Oasis of Karama in Abu Dhabi, in honor of the nation's righteous martyrs, and in commemoration of their memory in the history of the UAE and the conscience of its people. The ceremony was attended by the sheikh of Al-Azhar Al-Sharif, the eminence of the mother 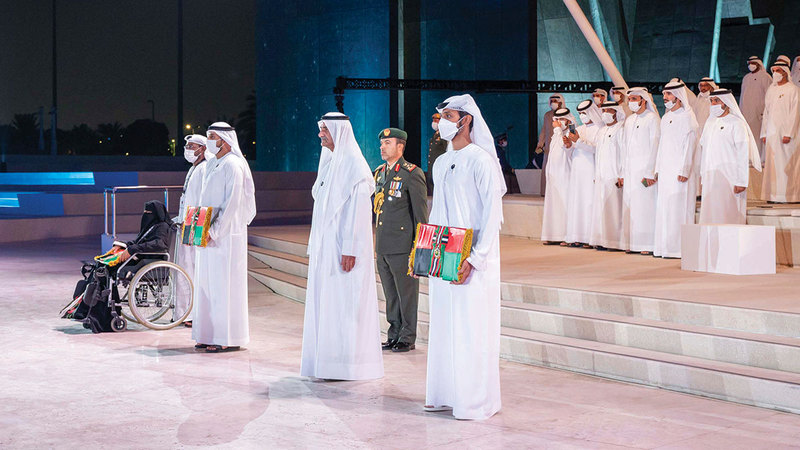 The "Martyr's Medal" was handed over to the families of the martyrs Bakhit, Al-Rashidi and Al-Shehhi

His Highness Sheikh Hamad bin Mohammed Al Sharqi, Member of the Supreme Council and Ruler of Fujairah, witnessed the "Martyr's Day" ceremony, which took place yesterday, in the Oasis of Karama in Abu Dhabi, in honor of the nation's righteous martyrs, and in commemoration of their memory in the history of the UAE and the conscience of its people.

The ceremony was attended by the Sheikh of Al-Azhar Al-Sharif, His Eminence Dr. Ahmed Al-Tayeb.

The Martyr's Day ceremony began with the arrival of His Highness Sheikh Hamad bin Mohammed Al Sharqi to Wahat Al Karama, after which His Highness revealed the "Mosque of the Fifty", which embodies the UAE's celebration of the 50th anniversary of its founding, and its civilized achievements over the past decades.

Then His Highness went to the martyr's monument and laid a wreath on him, while the artillery fired 21 rounds of salute to the souls of the martyrs, and in appreciation of their sacrifices for the sake of the homeland, and their heroism in the fields of defending its sovereignty and preserving its sovereignty.

The honor comes as an expression of appreciation and gratitude for the sacrifices of the brave martyrs, so that the flag of the UAE remains high, and for the patriotic stances of their families, and for the loyalty and sacrifice they showed to the homeland and sacrifice for it.

After that, His Highness Sheikh Hamad bin Mohammed Al Sharqi went to the main stage, where the national anthem of the United Arab Emirates was played.

First Undersecretary, Salem Khalifa Al Shamsi, gave a speech on Martyr's Day, in which he expressed his pride in standing in the Oasis of Dignity.. an oasis of glory, honor and pride, on one of the eternal days of the Emirates, the Martyr's Day in which the Emirates commemorates the memory of a constellation of the most sincere and bravest of its sons who were not afraid They died for the sake of the pride and dignity of their homeland, and they made the greatest sacrifice that a human being can make, which is the soul, in defense of the UAE flag, security, values ​​and sovereignty.

Al Shamsi said: "On this day, we remember those who engraved their names in letters of light in the history of the nation... We pray to God Almighty to give us the strength to inspire their values ​​and courage, and walk their path... the path of sacrifice, sincerity and redemption for the sake of the Emirates, which gave us a lot, and continues to give without limits, And her right we have to return the favor to her in every place and time, although we will never be able to deny her her right,” citing in this context the words of the poet: And the homelands are in the blood of every free person.

He pointed out that the righteous martyrs in all locations are flags, beacons, and good examples of patriotism, an embodiment of the authenticity of the Emirati human being, and the firm values ​​of courage and bravery that have distinguished him since ancient times, because they were brought up in the care of our valiant armed forces.. The men's factory and the inexhaustible Emirati National School No matter how many days and years passed.

He added that the decision of His Highness Sheikh Khalifa bin Zayed Al Nahyan, President of the State, to adopt November 30 of each year as a martyr's day, was an affirmation of the leadership's loyalty to the sons of the Emirates, since the era of the late Sheikh Zayed bin Sultan Al Nahyan, may his soul rest in peace. Which was a model of loyalty to his people and his homeland, and in order to immortalize the names of the martyrs in the history of the homeland, and in gratitude for what these martyrs offered to the homeland and its people, since the first martyr on November 30, 1971, and through all the martyrs, both civilians and soldiers.

He said: "We pledge to you, our honorable sheikhs, and we pledge to the people of the Emirates that we will remain on the path of the heroic martyrs in giving the most precious and precious, for the sake of the dignity and dignity of the nation, and that we will spare no effort in constantly developing ourselves, through training and acquiring new knowledge, so that we remain able to meet the call of duty." At any time and when, and to protect our gains and enhance our comprehensive strength, so that the UAE will move towards the next 50 years with confidence, ambition and security.”

He added: "As we remember our comrades in arms, the trench and the rifle, and we cast the shadows of this memory dear to our hearts, we pray to God that the UAE will remain as it has always been a symbol of pride and strength, and an oasis of security and safety under its leadership."

First Undersecretary, Salem Khalifa Salem Al Shamsi, concluded the Martyr’s Day speech by expressing his pride in his participation with our valiant armed forces in the fields of honor, and considered his injury while performing his national duty, the greatest medal of honor on his chest, and the least that he could offer as a sacrifice for the homeland, and bequeath it to his children and grandchildren after him. .

• The "Sculpture of the Fifty" embodies the UAE's celebration of the 50th anniversary of its founding and the achievements it has achieved.

Salute to the souls of the martyrs

At the end of the event, a squadron of Air Force planes flew over the sky of Wahat Al Karama, in a symbolic formation, to salute the souls of the righteous martyrs and the symbols they represent for sacrifice and redemption in the history of the United Arab Emirates, and in honor of their heroism and their positions in the fields of glory.