Football: Juventus wins in Salerno, equal between Verona and Cagliari

Allegri's team returns to success: 2-0 with goals from Dybala and Morata. White networks at Bentegodi 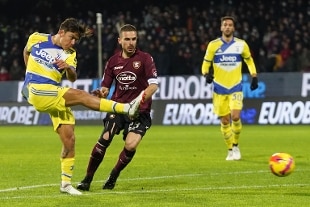 November 30, 2021 Juventus make no mistake with Salernitana and immediately return to winning. At the Arechi of Salerno it ends 2-0 thanks to goals from Dybala (who also misses a penalty) and Morata: bianconeri who rise to 24 points, temporarily moving to -1 from fifth place in Rome. The Campanians of Colantuono, on the other hand, remain stationary in last position. As expected, the bianconeri played the game from the start, finding the advantage in the 21st minute thanks to Paulo Dybala's lightning bolt. The Argentine exchanges with Kulusevski and, despite being out of balance, finds the right coordination to send the southpaw behind Belec. Before the half hour the Juventus doubling by Chiellini would also arrive, but an irregular position of Kean on the free-kick by Cuadrado (saved by Belec with the help of the pole),she is punished by the Var choking the defender's scream in her throat.

The start of recovery seems all in favor of Juve, but in the 58th minute Salernitana is sensationally one step away from equalization by hitting an incredible internal post with Ranieri, who from an inviting position kicks with a sure shot hitting the wood to the left of a beaten Szczesny . Allegri's team is saved and in the 70th minute punishes with the newly entered Morata, who at the near post puts a deflected cross from Bernardeschi in the net, returning to score after two months in the league. It is the goal that closes the match and secures the Juventus 3 points. In the final Dybala would have the possibility of a personal brace, but slips by kicking a penalty and sends to the stars.

White networks at the Bentegodi between Verona and Cagliari. In the first half the guests are better, in the second one sees a lot of Hellas who, however, is unable to capitalize on the opportunities built up. The yellow and blue formation rises to 20 points, while the Rossoblu are 9 and leave Salernitana alone in last place in the standings. Gunter returns to the center of the defense of Tudor who also launches Miguel Veloso from the first minute and confirms Barak and Caprari on the trocar in support of "Cholito" Simeone. Dalbert for Marin in the middle of the field is Mazzarri's surprise move, Cragno absent for "family reasons": Radunovic is defending the Sardinian goal. The first half is certainly not unforgettable. A chance for Verona on a poisonous cross by Faraoni that Simeone and Caprari fail to deflect into the goal,then Cagliari begins to take the field. High a flying right from Bellanova, at the side a shot from distance from Keita and a raid by Nandez rejected by Montipò. In the arms of Radunovic, however, the free kick kicked by Veloso.

At the start of the second half, the pace and also the nervousness of the match grows. Yellow flakes for Simeone, Lazovic and Keita while Hellas raises the engine revs. Simeone goes to the shot after a good combination with Faraoni, Radunovic saves to the ground who shortly after flies to deflect Barak's nice left-footed shot for a corner. Precisely on the developments of a corner kick comes the most dangerous opportunity for the yellow and blue: on the header of Dawidowicz, deflected by Joao Pedro, the ball hits the inside post and then dances in the penalty area before being removed from the rearguard. Red Blue. This is the last real ring of the match. At the end there is a powerful but central shot by Bessa and a great save by Radunovic on Lasagna which, however, is valid only for the photographers because the Hellas striker was offside.Cagliari grits its teeth, defends itself and snatches an important equal.