According to the health minister of Baden-Wuerttemberg, the situation of intensive care "is highly dramatic": Germany has already received availability from Italy (Lombardy), France and Switzerland.&nbsp; 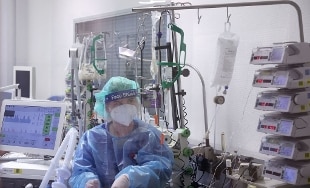 November 30, 2021 The peak of the fourth wave continues in Germany with contagions in continuous growth and now - in some regions - the intensive care units are close to collapse: "We are preparing to transfer patients abroad if necessary", thus the German Lander Minister Manne Lucha. The first willingness to receive patients from Lombardy and neighboring France and Switzerland.

"The load of the hospitals is immense" - said the Minister of Social Affairs and Integration of Baden-Württemberg - "and people can't take it anymore". For days, several German landers have begun to transfer patients due to the heavy burden of resuscitation. Two patients arrived in Italy from Bavaria in recent days: one in Bolzano and the other in Merano.

And calls for stricter restrictions against the fourth wave of Covid continue in the country: Janosch Dahmen - spokesman for Health of the Greens: in coalition in the government close to taking office - said that "a uniform partial lockdown is necessary in many regions of the Country to stop the fourth wave ": the Green politician is not asking for a generalized" shutdown "but for targeted closures where the situation has become out of control.

According to Robert Habeck, leader of the Greens - and future Deputy Chancellor and Minister of Economy and Climate - "Schools and kindergartens should remain open, but with masks and if possible with daily tests"

The next German Chancellor, Olaf Scholz, said he was "in favor of compulsory vaccination against the coronavirus".

Scholz - during the summit with the outgoing chancellor Angela Merkel and the presidents of the German landers dedicated to the health emergency - said that as a member of the Bundestag, he will vote in favor of the measure if it is brought to the attention of the House.

The Chancellor in pectore also said he was in favor of a provision banning the unvaccinated from accessing all non-essential businesses.