Covid, Germany goes towards vaccination obligation and the lockdown for No vax

Germany is preparing to discuss in Parliament the vaccination obligation for Covid and is moving towards a selective lockdown for the unvaccinated. Intensives full in some Länder: patients also sent to Lombardy 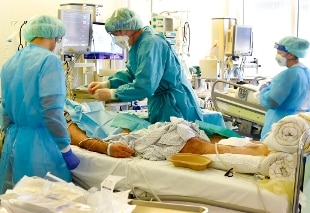 November 30, 2021 The discussion on the compulsory vaccination against Coronavirus will arrive in Parliament in Germany, probably next Thursday. Thus Steffen Seibert, spokesman for Chancellor Angela Merkel, who adds: "We are moving towards the introduction of a limitation of wider contacts for the unvaccinated - even in private meetings - and limitations for major events". The announcement of the probable squeeze on the day of the alarm on the intensive care departments almost collapsing in some Länder: patients will be sent to the countries that have given availability, for now Italy (Lombardy), France and Switzerland. Days ago two patients had been transferred from Bavaria to Italy.

Seibert added: "Germany plans to administer up to 30 million doses of the vaccine by Christmas" and that it will cover the full spectrum of immunizations "between first second and third doses".

Scholz - the next chancellor - and the greens: "vaccination obligation"

German Chancellor in pectore, Olaf Scholz, said he was "in favor of compulsory vaccination against the coronavirus". Scholz - during the summit with outgoing Chancellor Angela Merkel and the presidents of the German Länder dedicated to the health emergency - said that, as a member of the Bundestag, he will vote in favor of the measure if it is brought to the attention of the House. The Chancellor in pectore also said he was in favor of a provision banning the unvaccinated from accessing all non-essential businesses. And after Scholz, the probable next deputy chancellor, Robert Habeck, also declared himself in favor of the obligation to vaccinate against Covid: "Compulsory vaccination represents a strong interference in the freedom of the individual,but it protects life and ultimately the freedom of society, "said the co-leader of the Green Party.

The peak of the fourth wave continues in Germany with continually growing infections and now - in some regions - the intensive care units are close to collapse: "We are preparing to transfer patients abroad in the if necessary ", said the minister of the German lander Manne Lucha. The first willingness to receive patients from Lombardy and neighboring France and Switzerland. German hospitals are overloaded and "the load is immense", says the Minister of Social Affairs and Integration of Baden-Württemberg. For several days some German Länder have begun to transfer patients due to the heavy burden of resuscitation. Two patients arrived in Italy from Bavaria in recent days: one in Bolzano more in Merano.