Anne Applebaum, at the El Mundo Journalism Prize: "Without good information, democracy itself will be impossible"

"We are here tonight because we still believe that it is better to reveal crimes than to hide them." With just one sentence of her speech, Anne Applebaum justified ... 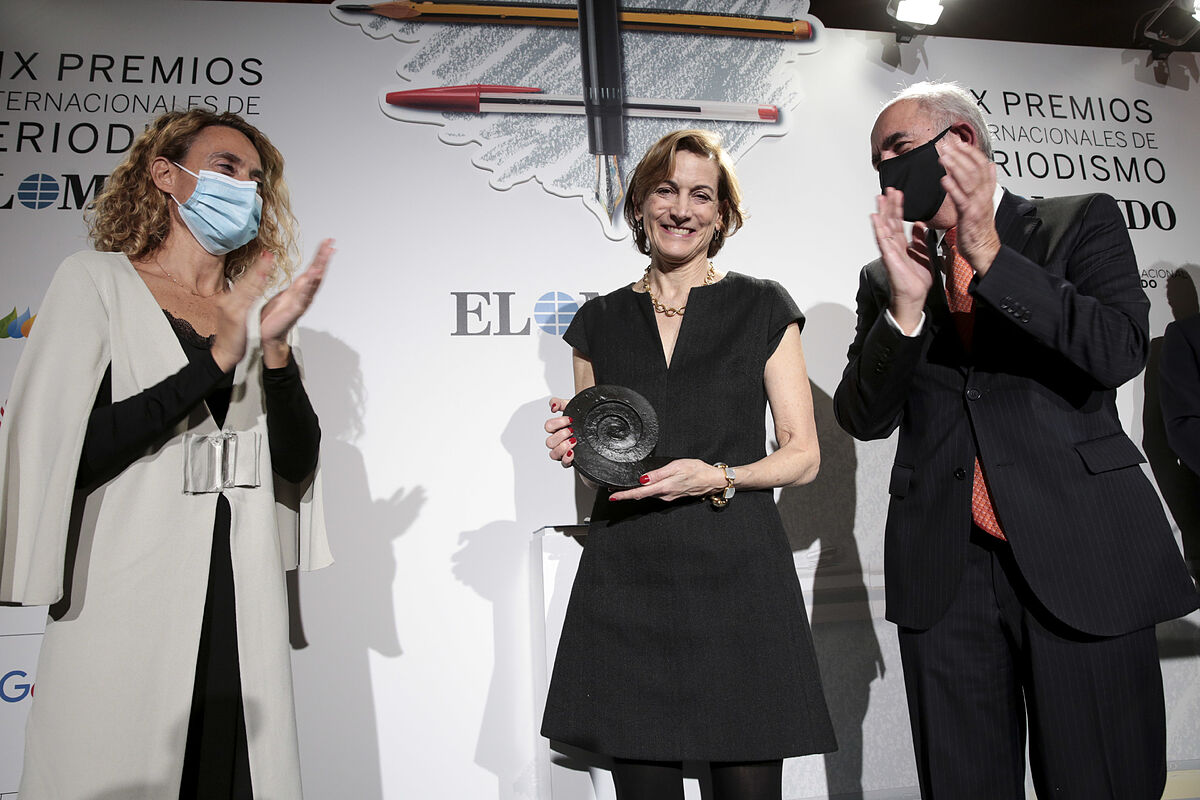 "We are here tonight because we still believe that it is better to reveal the crimes than to hide them."

With just one sentence of her speech, Anne Applebaum on Tuesday justified the decision of the jury of the

to grant her the award in this edition of 2021 after a year of hiatus due to the Covid pandemic.

" and "the perfect portrait of this current era of the rise of populism." And the journalist and historian made last night, at the

, in the collection of the award, a gala of these virtues with an intervention in which she dissected the future of journalism and civil society in a world where "reasonable, rational voices and nuanced are much more difficult to hear "and" polarization and radicalization spread rapidly. "

“If one half of the country cannot listen to the other, then we will no longer be able to have shared institutions, apolitical courts, a professional civil service, or a bipartisan foreign policy. We cannot compromise. We cannot make collective decisions, we cannot even agree on what we are deciding, "continued Applebaum, who, as he did in his work

'The Twilight of Democracy'

, again warned of the dangers that" entertainment , social interaction, education, commerce and politics are moving from the real world to the virtual world ”, especially since the arrival of the coronavirus.

The thinker previously explained the positive aspects of digitization for the press such as "reaching more audiences than ever", "innovating using video and audio", "speed" to access information or the integration of "the people who once they felt excluded from the national conversation. '

However, Applebaum delved into

. “Instead of walking into a real-life public square and openly discussing with our fellow citizens, we anonymously head to digital spaces where we rarely meet people with whom we disagree. The conversation is governed by algorithms designed to capture attention, collect data and sell advertising. The voices of the most angry, emotional, divisive, and often misleading participants are amplified. '

At this point, Applebaum pointed out to political leaders like

who "make fun of independent journalists and news organizations", "turn press conferences into sham" and try to "convince millions of people that do not get life-saving vaccines "," turn against democratic institutions "or" against the electoral system itself. "

The historian, who had been received and had previously toured the Prado Museum with

, director of EL MUNDO and

, president and director of the art gallery, glossed the virtue of the three murdered journalists -

- in whose honor these awards are given, sponsored by Iberdrola, Santander, Telefónica, Taboola and which also have the collaboration of Google and the Prado Museum. “They gave their lives to keep the world better informed and many people here tonight would do the same. Thank you for supporting journalism, professionalism, and expertise when they are in question. Without good information, diplomacy, trade and, of course, democracy itself will be impossible ”, the winner concluded to the applause of the audience.

An auditorium, the Cloister of the Prado Museum, which was attended by about 120 people and authorities such as the president of the Congress of Deputies,

; the Minister of Culture and Tourism of the Community of Madrid,

; the Italian ambassador in Spain,

or the PP spokesperson in the Congress of Deputies,

All of them had previously visited the exhibition 'Tornaviaje. Ibero-American Art in Spain 'upon arrival at the art gallery, they were addressed by the director of EL MUNDO, Francisco Rosell, who had inaugurated an awards ceremony that featured columnist Rafa Latorre as presenter. “It's hard to get over it and get on this platform when we have seen such shocking images of comrades who died in the act of duty,” Rosell began his speech after a video in memory of Fuentes, Anguita and Lacalle, “two huge war reporters and a huge columnist who represent the best of us and those we can never forget, "added the director of this newspaper.

"the best exercise of journalism"

with "a luxurious track record in which the iron curtain of disinformation of the communist was lifted and delved into current populist tendencies." "We must try to get the best out of all of us to tell power what it does not want to hear or discover what it does not want to be revealed [...] because a critical and independent press, even if it is very annoying, is the true blood of democracy and it is an asset that we must preserve, because when democracy fails, democracy becomes in danger, "he said.

Finally, the director of EL MUNDO wanted to recall that "when you desert journalism, abuse and impunity in our societies increases", taking as an example Donald Trump's four-year term in the United States, with whom Applebaum has always shown criticism, or the

consummated with the referendum of October 1, 2017.

Subsequently, the CEO of Iberdrola, Ángeles Santamaría, following the same line as the rest of the participants, assured that the press currently has "a fundamental role" in "maintaining a healthy democracy."

"I am convinced of the role of the media, which are essential to maintain our society, safeguard it and build it," she concluded.

The event was closed by the president of the Congress of Deputies, Meritxell Batet, who in her speech to those present praised the ability of the winner to "illuminate without glare" the path of journalism towards democracy and recalled that her work 'The decline of democracies' has accompanied it in recent months as its headline reading to the point of citing some of its passages in the last acts of

, on December 6, 2020. «Applebaum seems to have been impregnated with the slogan of The Washington Post newspaper [Democracy dies in darkness] although transformed rather into democracy, it dies in dazzling, fallacy or seduction, because the dangers current issues facing democracy are the constant object of attention in his texts »

Batet also added that the journalist and historian, as well as her extensive research career, which has placed her as one of the references in liberal thought in much of the world, “is characterized by engaging in the battle that is being waged in space. world public, both in its politics and in its journalism, the battle in defense of honesty, pluralism, the defense of dialogue and the generation and maintenance of consensus.