Many Afghans have made great sacrifices to assist US and other NATO forces throughout their stay in Afghanistan. Now, after the departure of those forces, the Afghans face grave dangers under the rule of the "Taliban", and therefore they are currently in need of someone to save them, and provide 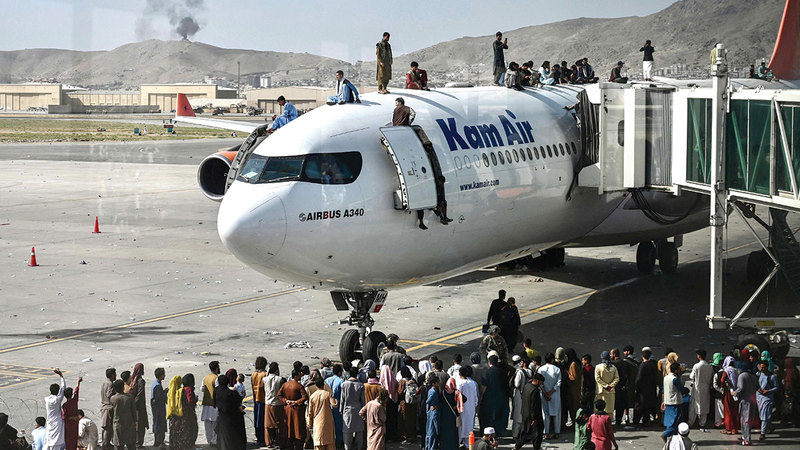 Many Afghans have made great sacrifices to assist US and other NATO forces throughout their stay in Afghanistan.

Now, after the departure of those forces, the Afghans face grave dangers under the rule of the "Taliban", and therefore they are currently in need of someone to rescue them and provide them with assistance.

Richard, a former Assistant Secretary of State for Population, Refugees, and Migration from 2012 to 2017, in an article published by the American National Interest magazine, that the administration of President Joe Biden is now reviving a historic practice of encouraging legal immigration, and wants to restore a strong program, to allow entry of refugees into the country.

About 70,000 Afghans were evacuated, granted conditional admission to the United States in August, and are now being moved from reception centers on military bases to American communities.

Richard adds that although this number may seem large, in fact a much larger number of Afghan refugees should be allowed into the United States.

Through these extraordinary efforts, Washington honors its humanitarian commitments and honors its historic commitment and the contributions of Afghans to it.

Some will say that refugees arriving from war zones are considered a burden or a threat, and although most refugees tend to work hard, they are willing to start doing hard work, can engage in self-employment, and abide by the law.

Richard, a senior fellow at the US organization Freedom House, says studies have in fact revealed that, throughout their existence, refugees pay more in taxes than they receive in welfare assistance.

However, some would say that priority should be given to entry into the United States for the most educated and skilled immigrants in order to boost the economy.

Richard says she has seen first-hand how resilient even vulnerable refugees from many diverse backgrounds are, and that they can make contributions to American society and culture while at the same time revitalizing the aging economies of their citizens.

Richard adds that many Americans know that the United States owes a special debt to the Afghans who have risked and worked for years as their partners.

Veterans believe that the lives of soldiers depended on the trust between Americans and Afghans on the battlefield, and they say that through their actions these Afghans gained not only the gratitude of the Americans, but they also deserved a way to escape from Afghanistan and enjoy a new beginning, if we look at how the American withdrawal led to Their safety is at risk within days.

Special immigrant visas were issued to some drivers, translators, and other Afghans who worked for the US Embassy and US forces.

But only a small percentage of those who served alongside Americans got their visas before the fall of Kabul, and a bailout was needed for those who applied for special immigrant visas, and they were left.

In addition, many other Afghans who supported the United States participated in activities that made them targets of Taliban retaliation.

These people include civil servants, electoral affairs, and aid workers, as well as women leaders, academics, and journalists.

They also need a road to safety.

Richard says she is particularly concerned about the human rights defenders and other Afghans who have played leadership roles in the long and arduous process of building democracy in Afghanistan over the past 20 years.

Because they championed the rights of all Americans, the United States should champion their campaign for freedom in Afghanistan, even if some have to do so while abroad or secretly pursue these goals.

She added that she had recently spoken to many Afghans who found themselves scattered around the world, and in neighboring countries, with expired visas;

They should not be forced to return to Afghanistan and face torture and death at the hands of the Taliban.

Many of those in Afghanistan are eligible to come to the United States as refugees, but they are trapped.

Even if they manage to reach a neighboring country, America's refugee admission program takes months, and sometimes years, to bring asylum seekers to the United States.

Richard explained that the refugee admission program - which includes UN agencies, US government officials from several ministries, and volunteers - is not authorized to bring in tens of thousands at once, and is currently overburdened.

A more ambitious program is needed to allow large numbers to enter next year and the year after.

Richard concluded her article by saying: "At the moment, America must open its doors to receive refugees from Afghanistan."

• Studies have revealed that the refugees pay, throughout their existence, more amounts in taxes than they receive as social welfare assistance.

• Many Americans know that the United States owes a special debt to the Afghans who took risks and worked for years as their partners.

• Many Afghans have made great sacrifices to assist the US and other North Atlantic Treaty Organization (NATO) forces throughout their stay in Afghanistan.

Now, after those forces are gone, the Afghans face grave dangers under the rule of the Taliban, so they now need to be rescued.