As the latest variant of the new coronavirus, the B.1.1.529 variant was confirmed in South Africa for the first time on November 9 and was reported to the World Health Organization for the first time on the 24th. The World Health Organization listed it as a "mutant strain that needs attention" and named it Omicron with the fifteenth Greek letter.   In the past few days, strictly preventing the 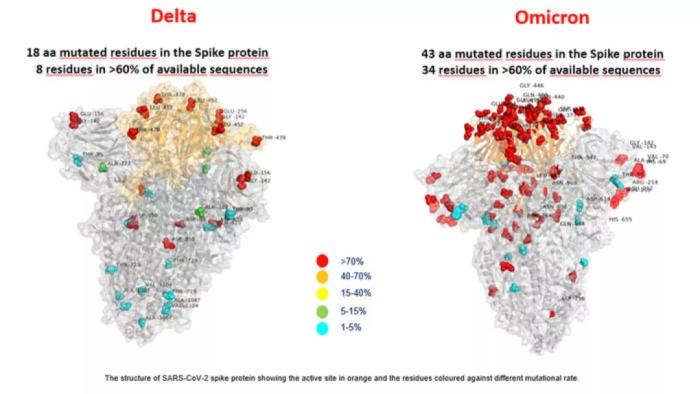 The World Health Organization listed it as a "mutant strain that needs attention" and named it Omicron with the fifteenth Greek letter.

In the past few days, strictly preventing the spread of Omi Keron mutant strains has become a new target for global epidemic prevention and control.

What information do people know about this new strain?

On the 27th local time, the scientific research team of the Children's Hospital of Rome, Italy released the world's first picture of the Omi Keron variant.

The picture shows that the Omi Keron mutant has more spike protein mutations than the Delta mutant.

These variations are diverse, and most of them are located in areas that interact with human cells.

The WHO also stated that the Omi Keron variant has a large number of mutations, some of which are worrying.

It is detected faster than other mutant strains that have caused a surge in infections in the past, indicating that this latest mutant strain may have a growth advantage.

It will take some time to judge

Does more spike protein mutations indicate that the mutant strain is more transmissible?

Researchers said that the new coronavirus has further adapted to the human body through mutation, but it does not necessarily mean that it has become more dangerous.

The World Health Organization pointed out on the 28th that it is still unclear whether the Omi Keron variant will cause more serious diseases or be more infectious than other new coronavirus variants.

It is worth noting that the WHO statement reiterated that based on the preliminary evidence analysis, the risk of reinfection caused by this variant strain may be higher.

On the same day, Zhong Nanshan, an academician of the Chinese Academy of Engineering, pointed out that the harmfulness of the Omi Keron mutant strain still needs some time to judge.

Molecular genetic testing found that the Omi Keron variant has more mutations in the receptor binding site, but how harmful is it, how fast it will spread, whether it will make the disease more serious, and whether it needs to be vaccinated R&D needs to be judged according to the situation. It is too early to draw a conclusion.

Different from other variants

In an interview on the 28th, President of the South African Medical Association Couche said that in the past 10 days, she had been in contact with about 30 patients who tested positive for the new crown virus, but the patients had different symptoms from before.

"What brought them to the doctor was a symptom of extreme fatigue," she said, which is unusual for young patients.

Couche said that most of the patients are men under the age of 40, and less than half have been vaccinated.

They also developed mild muscle soreness, itchy throat and dry cough, and only a few had fever.

These mild symptoms are different from the more severe symptoms caused by other variants.

"We are not saying that there will be no serious illnesses in the future," Couche said. "(But) for now, even the unvaccinated patients we see have only mild symptoms."

From an epidemiological point of view, the rate of new crown infections in South Africa has risen sharply in recent weeks, which is consistent with the detection of Omi Keron mutants.

In addition to South Africa, Belgium, Botswana, the United Kingdom, Germany, Israel, Italy and other countries have also discovered cases of infection with new mutant strains.

Some countries have announced the suspension of entry of foreigners.

Since the early morning of the 29th, Israel has banned all foreigners from entering the country.

Japanese Prime Minister Fumio Kishida also announced on the 29th that from 0:00 on the 30th, the entry of all foreigners into Japan will be suspended.

According to foreign media reports on the 29th, the WHO said that the global overall risk of the new crown virus Omi Keron variant is assessed as "very high" and may spread widely in the world.

Foreign Ministry spokesperson Wang Wenbin said on the 29th that China has noticed the situation regarding the mutated new crown virus.

Since the outbreak of the new crown pneumonia, China has always closely followed the changes in the global epidemic situation, adopted scientifically necessary epidemic prevention measures for people coming to China, and maintained dynamic adjustments.

Earlier, some voices said that the Omi Keron variant "may weaken the vaccine effect."

Can existing vaccines protect against this new variant strain?

The World Health Organization announced on its official website on the 28th that the existing new crown vaccine is still effective against the Omi Keron strain.

Burton, chief medical officer of the new crown vaccine manufacturer Modena, pointed out on the 28th that the current vaccine’s protection against the virus should still exist, but it depends on how long a person was vaccinated.

The best advice right now is to get the existing new crown vaccine.

In Germany, where people infected with Omi Keron mutant strains have been found, many experts also said that the vaccines currently produced are still partially effective against the new strains.

People should choose to continue vaccination, including vaccination booster as soon as possible to increase antibody levels.

Based on science and solidarity

How should people deal with Omi Keron mutants?

The WHO stated that it is cooperating with experts to understand the impact of the Omi Keron strain on current epidemic prevention measures, including vaccination.

According to media reports, Wu Zunyou, chief expert of epidemiology at the Chinese Center for Disease Control and Prevention, said on the 28th that the containment "clearance" policy is China's "magic weapon" for controlling the epidemic, and the effect is very good.

As long as normalized prevention and control measures are adhered to, the epidemic of Omi Keron strain can be prevented.

Public health measures such as wearing masks and maintaining social distancing are effective for all mutant strains.

"The new crown virus has changed again, and it is still a new crown virus." Zhang Wenhong, head of the Shanghai New Coronary Pneumonia Clinical Treatment Expert Team and Director of the Department of Infectious Diseases of Huashan Hospital Affiliated to Fudan University, said on Weibo on the same day that the Omi Keron mutant strain is not for China. With a big impact, China’s current rapid response and dynamic “zeroing” strategy can cope with various types of new crown variants.