The great bachelor of Pedro Sainz Rodríguez, the putañero minister of Franco

Whenever changes are proposed in the educational system in Spain, either to add or eliminate subjects, to approve the lazy by law and eliminate the revalidation of the ... 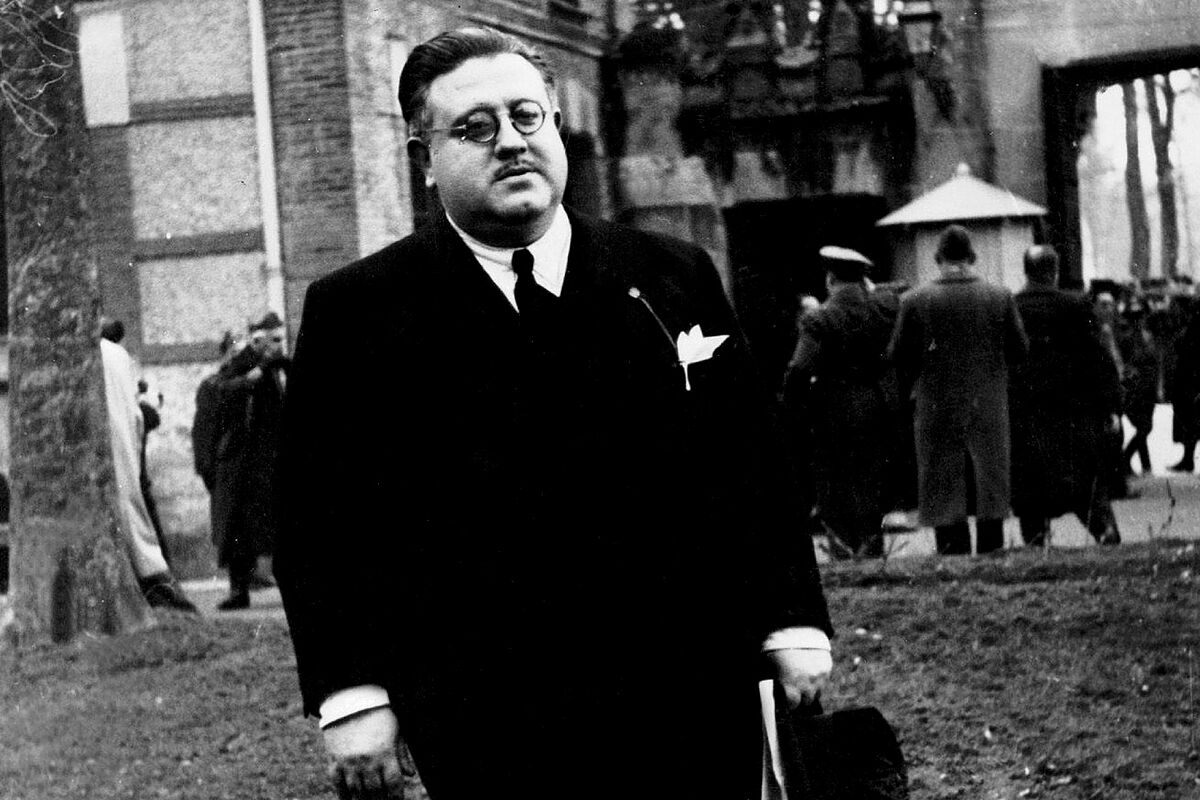 Whenever changes are proposed in the educational system in Spain, either to add or eliminate subjects, to approve the lazy by law and eliminate the revalidation of the zotes, a chorus of voices appear - nowadays necessarily octogenarian - that they nostalgically recall the benefits of the old postwar high school, which was in force until 1953, and designed by

, while the Civil War was still being fought.

As a Francoist position, Sainz Rodríguez had a short career -even so long compared to that of Máximo Huerta-, but one of profound influence: he accepted the portfolio in January 1938 and was dismissed by Franco at the end of the war, as his way of thinking and acting - he

was monarchical and epicurean, both in his sexual promiscuity and in his not moderate gluttony

- made the dictator uncomfortable.

However, his work had an influence during a good part of the Spanish 20th century: his reform of secondary education, in which the study of the humanities, memory and rigor was promoted - plus a high dose of formation of the national spirit-, it is often cited as a fertile soil for the emergence and professional consolidation of the brilliant generation of intellectuals of the Transition, especially lawyers and philologists.

Sainz Rodríguez, born in Madrid in 1897, was a man of letters who, although he felt comfortable in the warmth of his library - it was said that he had a larger private collection than that of the Athenaeum, full of literary studies, philosophy and religion- He also wanted to participate in public life, and exercised politics during the Primo de Rivera dictatorship and

, appearing through independent platforms with a right-wing bias.

These data point to, among other things, a complex personality that has made Sainz Rodríguez, over the decades, a conflictive figure, since it is not easy to reduce it to a single univocal aspect.

On the intellectual level, for example, she was a young star of Hispanic studies since the 1920s - she was awarded the National Prize for Literature in 1926 for a study of Spanish mystical literature, a subject on which she has been one of the authorities. indisputable-, and he was seen as the most advantageous follower of Marcelino Menéndez Pelayo's thesis. Sainz Rodríguez held an epic vision of classical Spanish literature, but at the same time - and here one of the first gray areas of his heterodox thought arises -

It is possible that if he had not been so actively involved in the politics of his time, Sainz Rodríguez would have remained a dark figure in Madrid's intellectual life, an acute historian and a nostalgic philologist of the Golden Age who would only be known by doctoral students and lyricsinjured with Diogenes syndrome. For a time he was a librarian at the Madrid Athenaeum - several legends circulate about his life, and one suggests that not a few books ended up in his private collection, secretly stolen - but there was something that worried him all his life and that motivated his public action : the decline, in his opinion, of Spanish education, a degenerative process that came from afar and that he identified as the real cause of the decline of our culture. Surely, his political lurch -

He was an opponent of Primo de Rivera, a monarchist during the Republic and a sympathizer of the Spanish Falange

, because of his proximity to the demands of the peasants - he gave them to locate himself and, once his preeminent position was consolidated, to have the tools to be able to act in educational life .

Disappointed with the Republic, he was one of the conspirators who participated in the July 1936 coup, although his motivations were different from Franco's:

Sainz Rodríguez longed for the crown, and believed that the insurrection of the military opened the possibility of a restoration. monarchical

that would elevate Juan de Borbón to the throne.

His objective, in any case, was not the establishment of another military dictatorship, but a parliamentary monarchy that did not repeat the errors of 1931. In fact, he believed that Franco participated in the same idea, and that encouraged him to be part of the first governments of the national zone.

In the spring of 1938 he received the commission that most excited him, he was appointed minister of education and began the work of his star law, the Reform of the Second Education, published in the BOE on September 20 of that same year.

Obviously, no matter how much someone praises the virtues of that rule, almost nothing of it would serve for our time. But by 1938 it was advanced in aspects such as the requirement to learn foreign languages ​​-German or Italian-, at the same time that it included in its six courses prior to the jump to the university a core subject of cosmology, another of mathematics and a very solid humanistic base , with in-depth study of Latin and classical Greek. Another of the noble aspects of that law was that it sought excellence and individual effort, eliminating group evaluations and subjecting students to state exams regulated by independent courts. The discipline was military at least, and the religious content clouded everything, a blessed tinge that Sainz Rodríguez did not pursue,but that Franco imposed as a complement to his national-Catholic turn. The curriculum, so rigorous, in short, ended up creating an elite and for two and a half decades the results were good for those who could access the plan, almost all children of the middle and upper classes, not necessarily affected by the regime, but yes with good income. Once the law was completed, Sainz Rodríguez could not, however, complete his ambitious ministerial work. Franco had stopped trusting him in 1939 for different reasons, mainly because he suspected the existence of maneuvers against him to remove him from power and force a rapid monarchical restoration, a kind of Madrid-style Valkyrie Operation that went wrong at the first time. exchange. More amusing are the other reasons, of picaresque extraction,and that they have to do with the lustful life of Sainz Rodríguez,

a man known in all the restaurants, casinos and lupanares to which he had access, and that he visited frequently.

his silhouette, an almost spherical pulp of fatty meat

that he swallowed the 'cordon bleus' - that is, the cachopos - in one sitting and, above all, in the company of literary and intellectual friends. In the 1930s, Pedro Sainz Rodríguez made a good friendship with the journalist Julio Camba, and they exchanged a short but juicy correspondence in which they looked for the occasion to meet, go to dinner -Camba spoke of "having a 'gueuleton'", which is pitanza in French- and spending the last hours of the morning playing poker in the north of Spain and even in Biarritz. What is unknown is whether Camba came to accompany Sainz Rodríguez on his night rounds through the brothels, which was what occupied the intellectual's time the most, apart from books. There is a very widespread story, and it has been explained with different variations - which leads to think that it is apocryphal in the form,although not in the background-, which has to

as the protagonist, towards the end of the civil war. One day, Carmen

, since he was aware of his fame as a seasoned gourmet. What surprised him, he said, was that

these 'eating houses' looked so decrepit on the outside

. Candid in her piousness, what Mrs. Franco did not suspect was that these slums were brothels on the outskirts of Madrid where you could go fishing for a venereal disease for a few dollars.

Another variant tells us that, recriminated by Franco for going to the tolerance houses in an official car, Sainz Rodríguez replied that if it would seem better for him to go on foot to fulfill this task. About what there is no dispute is that, indeed,

, who felt a preference -according to the taxonomy of Camilo José Cela- for the young izas, rather than the ruffles. Veterans, and that she even organized expeditions with friends well into her life, first in Estoril - where she went into exile in 1939, to be close to Don Juan, of whom she was part of the advisory council - as well as in Madrid after her return to Spain to The mid-50s. It is said that politicians, professors and even poets such as the future Nobel laureate participated in those raids.

, who let himself be carried away by inertia while he struggled internally to accept his homosexuality

Sainz Rodríguez lived almost a hundred years old, and died in 1986. At the time of his death, he was part of the Spanish intellectual landscape, rather than the political one, and that final assessment was the one that prevailed in the obituaries published in the press, where more importance was given to his education law and his philological lineage close to Menéndez Pelayo -in the obituary of 'El País', at least in the online version, there is a funny

, a slip that Sainz Rodríguez would have been amused by his connection with gluttony, his second favorite sin.

, after don Juan's sacrificial resignation, and from that moment his place was fundamentally in the academy and in writing, where he could give rein he released what Martin Amis would call "a horrible bookish vice": he published his memoirs - 'Testimony and memories' (Planeta, 1978) -, a book of portraits of important figures in Spanish public life whom he dealt with, as well as various studies philological.

After a lifetime at the Royal Academy of History, where he held a position in 1940, he also entered the RAE in 1979. Seven years later he died at home, well accompanied by his more than 20,000 books.