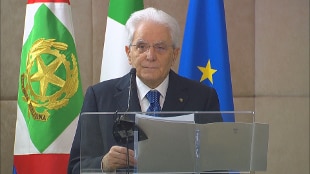 November 29, 2021 "Without that ductile and expressive language - which for this reason replaced Latin - it would not have been possible for Dante to take us on a journey which, as Pope Francis also wanted to remember, in this 700th anniversary of the Supreme Poet, is testimony 'of the thirst for the infinite inherent in the heart of man'. The Italian would not have been born without the creativity of those 'first Italians'; their creativity would not have translated into works so modern and so current without the nascent Italian of the time " . This was stated by the President of the Republic, Sergio Mattarella, in his speech at the Palazzo della Farnesina for the 21st edition of the General States of Italian Language and Creativity in the world.

The head of state underlines that "the genius of writers - in works of fascinating value and enduring modernity - conferred dignity on the Italian language even before the institutions adopted it as the national language. Italian, in other words, is the son of creativity. And it is an expressive tool of this creativity appreciated and admired internationally. The great authors who baptized our language and 'nourished' it in the first two or three centuries of its existence have carried out a task of extraordinary importance . On the one hand, they used, developing it, a new language, giving us a legacy that is still alive and dynamic today. That of Ciullo d'Alcamo, Jacopone da Todi or the poets of Stilnovo is an Italian that is fully intelligible to us,where words and expressions in current use abound ".

According to Mattarella, it is "nothing further from a fixed, immobile, immutable language. Their ability to move on a multiplicity of registers, from the most stately to the closest to everyday speech, is already in itself a proof of On the other hand - he concludes - this new instrument, the Italian, has been put at the service of a creative effort - even this extraordinary one - which has generated works that are still very current today, capable of touching the most intimate chords of the readers of every time and all over the world ".

What Italianness means is "an open question for centuries and still very topical, which we must make ours, focusing on the past and on the lessons of the present, even those learned with sacrifice and pain, as is the experience of the pandemic crisis" he adds the Head of State.

"The field in which we operate is characterized by the complexity of the reality that surrounds us, the world is faced with challenges that no country, no culture, can imagine facing alone. Crises, such as those induced by climate change and just aspirations for one development, authentically fair and sustainable, all intersect with new global frictions and hotbeds of instability that cross geographic lines and between our continents "concludes Mattarella.