Got snowed in at the pub - here they sing karaoke

About 60 pub visitors are stranded at the British pub The Tan Hill Inn in the Yorkshire Dales. The guests who were on site to see a tribute concert to Oasis last Friday were snowed in and have been forced to spend three nights in Britain's highest pub. 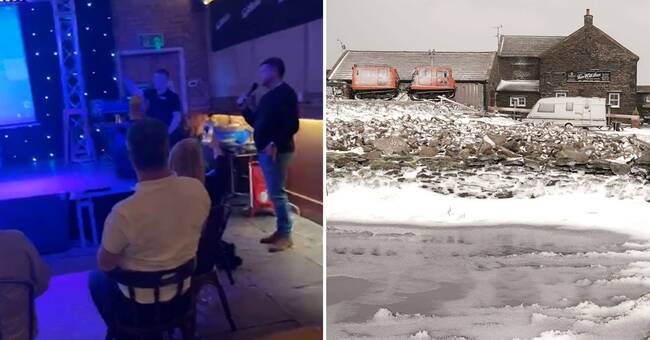 At least three people have died after being hit by falling trees in storm Arwen, which swept across Britain with gusts of over 145 kilometers per hour.

Tens of thousands of homes are still without electricity and weather warnings apply to many regions.

In addition to the large amount of snow that the storm brought in, it has also hit power lines and caused major disruptions to traffic.

Although storm Arwen has caused severe problems across the country, pub visitors at the Tan Hill Inn do not seem to have had it too bad.

Guests at the famous pub, located 528 meters above sea level, woke up to 3 meters of snow on Saturday.

Since then, a tunnel has been excavated from the pub's front door, but due to damage to power cables, the roads are unusable.

However, the rescue service has managed to pick up a person who needed medical care, but the other guests have been forced to spend three nights in makeshift beds arranged on the pub floor.

Since last Friday, the pub's employees have arranged activities such as quizzes, film screenings, offered a free buffet and served Sunday lunch, all to keep people entertained.

"Some do not want to leave," owner Nicola Townsend told the BBC.