Avocados are food for animals in Australia due to overproduction

Interest in the more popular fruit began in the early 1990s, when a simple dish appeared in a Sydney café run by chef Bill Granger, consisting of avocado, lemon, sea salt, and olive oil, and served on toast. And now, more than three decades later, fitness professionals have transformed 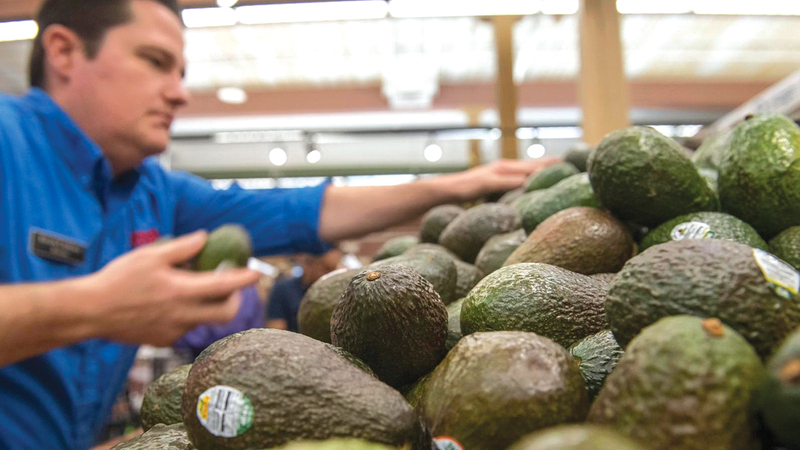 Planting many of its trees increased the abundance of "green gold"

Avocados are food for animals in Australia due to overproduction

Interest in the more popular fruit began in the early 1990s, when a simple dish appeared in a Sydney café run by chef Bill Granger, consisting of avocado, lemon, sea salt, and olive oil, and served on toast.

Now, more than three decades later, fitness professionals, food makers, and celebrities have turned the concept into a global style of food, on social media.

Australia is once again the scene of a defining moment in avocado history.

The country is currently witnessing what industry insiders described as "a glut of avocado production".

A bumper avocado harvest coincided with years of drought and prolonged shutdowns that shut down the hospitality sector in the two largest cities.

Meanwhile, tens of thousands of avocado trees, which have been planted over the past years to meet the increasing demand, are beginning to bear fruit.

Because the borders were closed, many farmers struggled to find foreign workers to harvest their crops.

Suddenly Australia has a much more harvest than expected, and you don't know what to do with it.

The fruit is discarded as soon as there are minor defects.

While avocados were served to customers as a special breakfast, large quantities of this expensive fruit were given to animals, as unfamiliar fodder.

"Pigs love this kind of food, and farmers know they can get a lot of pork for it," says farmer Brad Rodgers, from Western Australia and head of a lobbying group.

"They are very lucky animals," he added.

Australian farmers expect to produce more than 120,000 tons of avocados this year, an increase of more than 50 percent from last year.

In the western state, the second largest exporter of avocados after Queensland, production is expected to quadruple this year.

The result is that prices have fallen to a record low, averaging an Australian dollar, or just over 50 pence, per avocado, in supermarkets, down from $3, earlier this year.

This was great for avocado lovers and food bloggers, and fit their tight budget, but it made life difficult for farmers, who invested their money in producing a crop that was so profitable that it was called "green gold".

Tim Kemp, who owns an avocado farm in Bates Ridge, north of Sydney, said the half-ton boxes of avocados that once fetched A$2,000-2,500 are now selling for just $270.

It is like a ship that has been sailing towards us, for a long time, but it hit the pier and smashed everyone.”

In addition, other farmers have resorted to throwing away their low-quality fruits, because they are not worth the cost of packing and sending them to the market.

Others run over avocados with tractors, and use them as fertilizer.

They sell bags of avocado directly to consumers on the roadside, or on social media, where they can get a better price than the market.

Buyers tell farmers don't bother selling second-rate fruit at the market, it's worth nothing.

It is either thrown away or sold as food for pigs.”

Tim Kemp, owner of an avocado farm in Bates Ridge, north of Sydney, complains that big companies such as the Costa Group - Australia's largest avocado producer - have focused on profit, planting too many trees, flooding the market.

Like many farmers, he is also angry that avocados are imported from New Zealand, in huge quantities, and sold in supermarkets.

Farmers fear that the setback will last for many years and cause many of them to go bankrupt.

Avocado production in Australia is expected to rise to 170,000 tons by 2026, as more trees reach production.

This comes at a time when the local market has become unsustainable, as avocado consumption has doubled in the past 20 years.

• 120 thousand tons of avocados are expected to be produced this year in Australia.

• The country is experiencing what industry insiders describe as an “avocado glut” after years of drought and prolonged shutdowns.