Al-Burhan inspects Sudanese soldiers on the border with Ethiopia, and the "resistance committees" in Khartoum deny meeting Hamdok

Today, Monday, the head of the Sudanese Sovereign Council, Abdel Fattah Al-Burhan, began a visit to the site of the clashes on the border with Ethiopia, while formations of the "resistance committees" denied their participation in a meeting with Prime Minister Abdullah Hamdok. 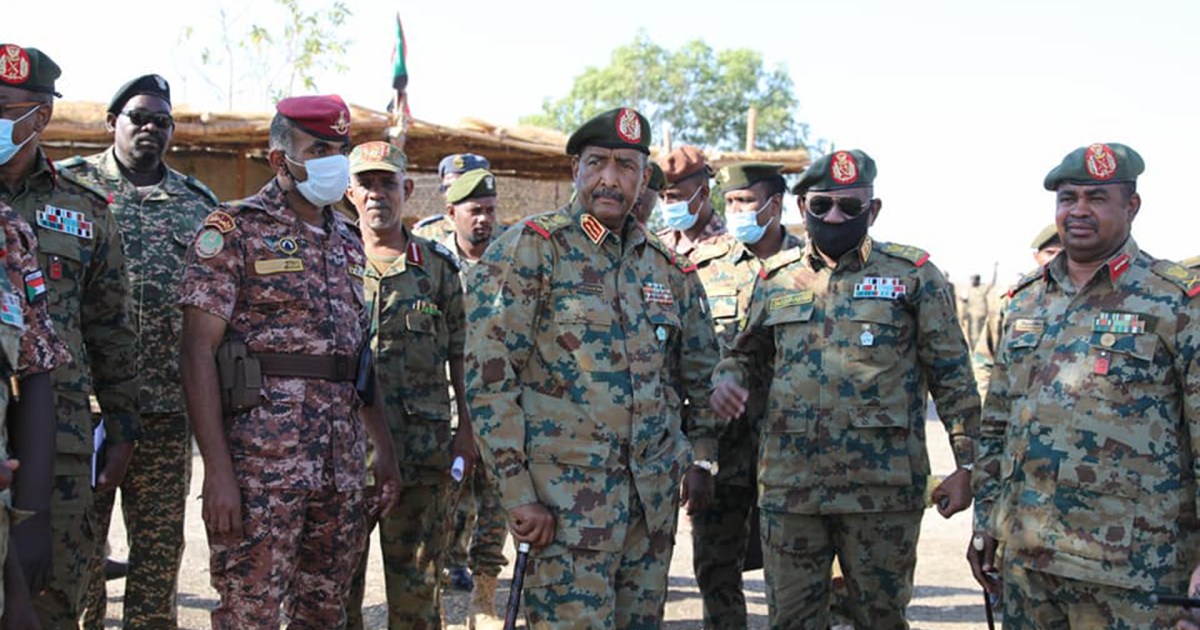 Today, Monday, the head of the Sudanese Sovereign Council, Abdel Fattah Al-Burhan, began a visit to the site of the clashes on the border with Ethiopia, while formations of the "resistance committees" denied their participation in a meeting with Prime Minister Abdullah Hamdok, and called for participation in the demonstrations tomorrow, Tuesday, in the capital and the states.

An informed military source told Al Jazeera that Al-Burhan's visit to the Al-Fashqa area aims to inspect the Sudanese soldiers, and to determine the situation on the eastern borders of the country.

The visit comes a day after the Sudanese army announced the killing of 6 members of its forces on Saturday in the Al-Fashqa area, as a result of an attack carried out by groups of the Ethiopian army and militias.

On the other hand, the Ethiopian army chief, Berhanu Gula, denied that his forces launched any attacks in the Al-Fashqa Al-Soghra area on the border between Ethiopia and Sudan.

The Ethiopian military official praised his country's relationship with Sudan, expressing his hope that all outstanding issues between the two countries would be resolved.

In turn, the European Council expressed its concern over the killing of Sudanese soldiers on the border with Ethiopia.

The area of ​​Al-Fashqa is about two million acres, and it extends a distance of 168 km with the Ethiopian border, out of the total border distance of Gedaref State with Ethiopia, which is about 265 km.

Last December, the Sudanese army imposed its control over the lands of Al-Fashqa, after it had been seized for a quarter of a century by "Ethiopian gangs", according to the Sudanese army's description.

In another Sudanese matter, the Alliance of Freedom and Change Forces - the National Charter Group announced the formation of a committee to amend the constitutional document, and to present the amendments to the parties concerned with the amendments later.

In a statement, the coalition revealed the formation of committees to prepare a draft for the implementation of the political declaration signed between Al-Burhan and Hamdok, and presented it to the Sovereignty Council, the Ministers and the Civil Forces, for further consultations.

The coalition renewed its welcome for the political declaration, as a step to complete civil power structures through a national charter, to which all parties to the political process are committed.

The statement stressed the need to support the transitional period to preserve the gains of the revolution, achieve a comprehensive peace agreement, and complete the institutions of transitional governance, leading to fair elections.

Hamdok and the resistance committees

On the other hand, formations of the "resistance committees" in Khartoum denied - at dawn on Monday - their participation in a meeting with Hamdok, and called for participation in Tuesday's demonstrations in the capital and the states.

On Sunday, a statement issued by Hamdok's office said that Hamdok held a meeting with a number of members of the resistance committees in Khartoum and the states, regarding the political agreement he signed with Army Commander Abdel Fattah Al-Burhan on November 21.

The Omdurman Great Resistance Coordination said, We confirm that we did not and will not meet Hamdok in his alleged meeting, and we call on the people to participate in the demonstrations on Tuesday, November 30.

In turn, the Khartoum-East Resistance Committees considered the statements about Hamdok's meeting with the resistance committees a "spread of fallacies", stressing their rejection of any dialogue, negotiation or partnership with what they described as "the apparatus of the coup authority and its supporters."

While the Khartoum-Central Resistance Committees confirmed that they did not participate in this meeting, and that their position is: "No negotiation, no partnership, no bargaining."

The resistance committees were formed during the Sudanese revolution against the regime of Omar al-Bashir, and they are popular groups that contributed to organizing the protest movement, forcing the army leadership to dismiss al-Bashir on April 11, 2019.

According to the statement, Hamdok stressed that he had no personal interest in signing the political agreement with the army chief, Abdel Fattah al-Burhan, but rather the interest of the country.

Hamdok clarified that what he called for signing were several basic reasons, represented in injecting the blood of young people and preserving the gains during the past two years from returning to the international community, economic reforms and achieving peace, as well as resuming the path of democratic transformation.

Sudan has witnessed, since last October 25, protests rejecting measures taken by Al-Burhan on the same day, which included declaring a state of emergency, dissolving the Sovereignty Councils and Transitional Ministers, and dismissing Prime Minister Abdullah Hamdok, after the arrest of party leaders and officials, as part of measures described by political forces as a “military coup.” .

Although Al-Burhan and Hamdok signed a political agreement on November 21, which includes the latter’s return to his position, the formation of a government of competencies, the release of political detainees, and the two parties pledge to work together to complete the democratic path;

Political and civil forces expressed their rejection of the agreement as an attempt to legitimize the coup, pledging to continue protests until full civilian rule is achieved.

On more than one occasion, Al-Burhan stressed that he had taken the October 25 measures to protect the country from a real danger, accusing political forces of inciting chaos.