China News Service, Beijing, November 29th (Xu Jing) Black stork, great bustard, swans, grebes, wild geese, mandarin ducks, grey cranes, goosanders... With the arrival of the peak of migration in autumn and winter, the number of birds monitored in Beijing is gradually rise. According to analysis, there are about 3 million migratory birds "overwintering" in Beijing this year. In order for the bir 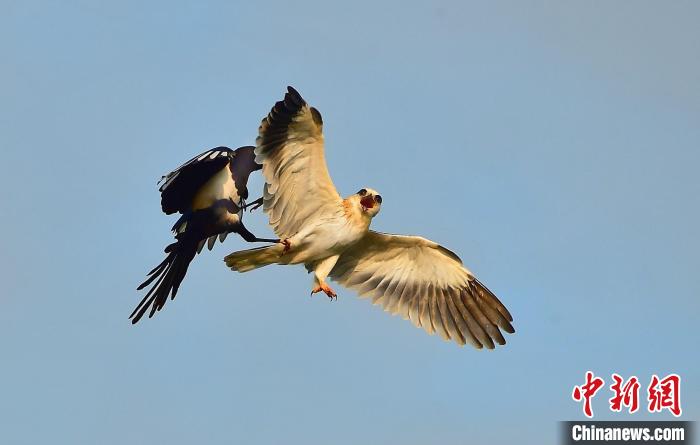 According to analysis, there are about 3 million migratory birds "overwintering" in Beijing this year. In order for the birds to spend the winter safely, Beijing has taken overall consideration of the needs of animal "residents" in the construction of landscaping.

At present, the population of wild animals including migratory birds in the city is gradually increasing, and Beijing has become one of the capitals with the richest biodiversity in the world.

With the arrival of the peak of autumn and winter migration, the number of bird monitoring in Beijing is gradually increasing.

Bird experts said that according to previous monitoring reports and current monitoring data analysis, there are about 3 million migratory birds in Beijing this winter.

In the construction of landscaping, Beijing takes overall consideration of the food, drink, housing, and transportation needs of animal “residents”. The city’s wildlife population, including migratory birds, has gradually increased, and Beijing has become one of the capitals with the richest biodiversity in the world.

The World's Vulnerable Species Great Bustard Appears in the Sub-center

Recently, three great bustards appearing in the sub-center of the city have become the "stars" of Beijing's birdwatching circle.

Guo Geng, a researcher at Beijing Miluyuan and a senior bird watching enthusiast, told reporters that the Great Bustard is a bird of the genus Bustardidae and is a national first-class protected animal. The panda level is the same.

Statistics show that there are only a few thousand great bustards in the world.

It is understood that the Great Bustard has appeared in Tongzhou for 6 consecutive years.

Veteran bird watching enthusiast Li Hui told reporters that according to the comparison of photos he took last year, two of the three great bustards this year were most likely to have been there last year, and one was added this year.

In order to reduce the impact of bird watching crowds on birds, the municipal and district landscaping departments arranged in advance, in addition to close monitoring, they also produced dozens of promotional slogans and posted them in locations where the great bustard might be photographed, reminding everyone not to disturb, feed, Affect the animals and create a quiet and comfortable living environment for them; the sub-center Bird Love Club organized more than 200 volunteers to guard the Great Bustard together with other bird love organizations.

Now, at least 8 volunteers are divided into two groups, morning and afternoon, to maintain and persuade everyone to watch birds in a civilized manner and to prevent and control the epidemic.

Thanks to the joint efforts of professional departments and volunteers, these great bustards enjoyed a relaxing time during their migration.

A variety of protected animals "settled" in the forest park

Located in the sub-center of the city, the Urban Green Heart Forest Park covers an area of ​​11.2 square kilometers, which is equivalent to two New York Central Parks.

In order to restore biodiversity, Green Heart took the lead in exploring the construction of an ecological conservation core, partially preserving the state of the wilderness, setting up Benjas’ piles and animal migration corridors, and sowing pioneer-resistant tree species, shrubs and grass species in the conservation core. As well as slow-growing plants, weeds, shrubs, sparse forests, and dense forests have gradually formed. Among them, food-source nectar plants account for 38%.

At present, the urban green heart has planted 443,000 native tree species, accounting for 88.1% of the total trees, forming a complete small animal food supply chain, with pollen and nectar in spring; mulberries, plums, and apricots in summer; hawthorn and crabapple in autumn , Persimmons and various seeds; there are also plenty of nuts to be found in winter.

According to statistics from the management unit of the Urban Green Heart Forest Park, in the first year of the park, more than 70 species of birds and beasts have been monitored. Face buzzard eagle, striated belly little owl, short-eared owl, hedgehog, yellow weasel, etc.

Beijing has 503 species of wild birds, accounting for more than one-third of the number of bird species in my country. It ranks second among the capitals of the Group of Twenty (G20) countries. Beijing has become the world's most biodiversity-rich metropolis. one.

Zhang Zhiming, director of the Wildlife and Wetland Protection Division of the Beijing Municipal Bureau of Landscaping, introduced that when Beijing launched a new round of afforestation of one million acres in 2018, it clearly proposed to build an interconnected forest and wetland ecosystem to lay a solid foundation for increasing biodiversity. Base.

In terms of plant selection, the selection criteria of "native soil, longevity, stress resistance, food source, and beauty" are put forward. In addition to considering the benefits of landscape and greening, plant configuration should also pay attention to the construction of animals, birds, and habitat ecological environment.

In addition, in order to create a healthy and stable forest ecosystem, the Beijing Municipal Bureau of Landscaping has also strengthened wildlife rescue and epidemic disease monitoring by protecting and restoring wild animal habitats, and has worked closely with public security, market supervision, and urban management law enforcement agencies to crack down on illegal activities. A series of work such as hunting, operating and using wild animals for illegal and criminal activities, continuously increase the protection of wild animals, and lay a solid green ecological foundation for the construction of a world-class harmonious and livable city.