Round-the-clock research: how the situation with the spread of a new strain of coronavirus "omicron" is developing

In Russia, no cases of infection with a new strain of coronavirus, dubbed omicron, have yet been identified, an expert from the Central Research Institute of Rospotrebnadzor said. At the same time, the "Vector" center noted that the new variant of the disease raises serious concerns and requires immediate study. Information continues to come from different states about the detection of infections with a new strain and the introduction of new restrictions on communication between countries. So, in the Netherlands, at least 13 cases of the omicron strain were found; these are passengers on flights returning from South Africa. In South Africa, meanwhile, they talked about the round-the-clock work on the study of "omicron", and also listed the symptoms characteristic of the new variant of SARS-CoV-2. 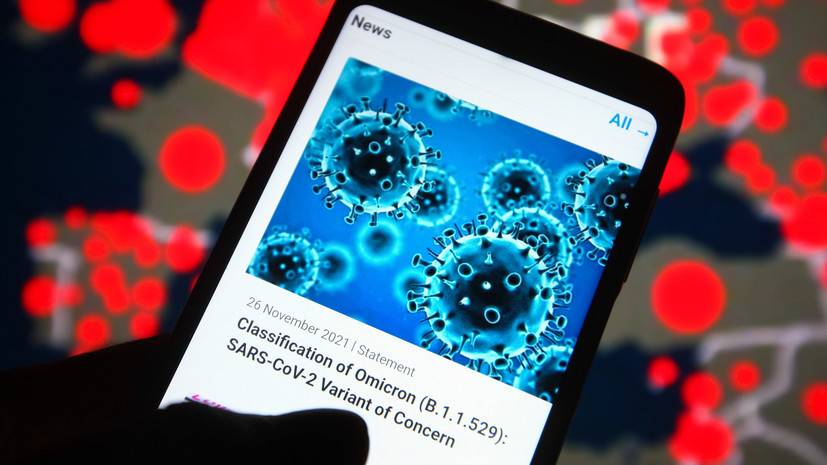 At the moment, no variant of the omicron coronavirus has been detected in Russia, said Kamil Khafizov, head of the scientific group for the development of new methods for diagnosing human diseases at the Central Research Institute of Epidemiology of Rospotrebnadzor.

“As of Sunday, the omicron strain has not been found in Russia.

At the same time, active work is underway on sequencing the genomes of the coronavirus, including from patients who have recently visited foreign countries, "TASS quotes Khafizov.

At the same time, the Vector Center of Rospotrebnadzor said that omicron raises serious concerns and requires immediate study.

The organization noted that the variant has a large number of mutations in the S-protein gene.

“A number of mutations characteristic of the new genovariant have also been shown to play a role in evading the immune response.

We will remind, on November 24, it became known that scientists have identified a new strain of coronavirus, which is potentially capable of becoming its most dangerous option.

Initially, the emergence of a new strain was reported in Botswana, South Africa and Hong Kong.

The strain was named B.1.1.529 and has an “incredibly high” number of mutations.

Later the variant was designated by the Greek letter "omicron".

A number of states have announced restrictions on transport links with other countries amid the spread of a new version of the coronavirus.

Israel became the first country whose leadership decided to close the border to all foreigners for two weeks in connection with the emergence of a new strain of "omicron".

To advise Russian citizens in South Africa in connection with the cancellation of flights from the republic, Telegram channels of the Russian Foreign Ministry were created.

Cases of infection with the new variant have been confirmed in many countries.

A large one-time detection of infection with a new strain was noted in the Netherlands in 13 passengers arriving from South Africa.

The Netherlands' National Institute of Health and the Environment said in a statement that all 624 passengers who returned to the country on November 26 were tested.

As a result, 61 were diagnosed with coronavirus, but 13 cases of the omicron strain were detected after additional examination of the samples.

At the same time, the study is not over, the number of infections with the new variant of the virus may turn out to be higher.

Two cases have also been identified in the Australian state of New South Wales in two foreign travelers.

The local health ministry said the cases arrived in Sydney from southern Africa on November 27.

In the UK, where at least two cases of omicron infection have also been identified, entry rules have been tightened.

Now, when entering the territory of the state, everyone, including those vaccinated against COVID-19, needs to do a PCR test and self-isolate until a negative result is obtained.

Also on russian.rt.com The WHO told about the hypothesis of the origin of the omicron coronavirus strain

Against the background of the identification of the omicron option, the European states are also beginning to impose restrictions.

Thus, the Swiss authorities decided to restrict entry from the Czech Republic and the Netherlands, where a number of cases of a new strain are known.

The Philippine authorities, in turn, suspended entry for 14 days for persons who had previously visited Switzerland, Austria, Belgium, Hungary, Italy, the Czech Republic and the Netherlands.

The list also includes a number of African countries.

In South Africa, meanwhile, they talked about the symptoms of a new variant of the coronavirus.

The chairman of the South African Medical Association, Angelique Kutze, said that about ten days ago, patients began to visit doctors with complaints of severe fatigue and headache.

She noted that most of the patients did not have such signs as fever and pain in the body, they did not even believe that they were suffering from COVID-19.

“However, the tests carried out showed that they had a coronavirus caused by a new strain, which was then named omicron,” the TASS physician quotes.

Meanwhile, South African scientists said they are continuing to study the detected variant of the coronavirus around the clock.

"Nowadays, round-the-clock studies of its features are being conducted in order to better understand the biological nature of the virus and the potential for infection," Foster Mohale, an official representative of the South African Ministry of Health, quotes TASS.

In the United States, meanwhile, said that data coming from South Africa on the spread of the new strain indicate a higher infectivity of omicron compared to other variants of the coronavirus.

This was announced by the head of the US National Institutes of Health Francis Collins.

At the same time, according to him, it is too early to generally assess the danger of the omicron in relation to the previous options.

According to him, there is still no information about the emergence of a new strain in the United States.