Pensioner Per in Östersund helps seniors obtain covid passports: "Many older people are not digitized"

In a few days, covidpass may be required for larger indoor events. The passport can easily be ordered with e-identification, but many older people are not digitized. In Östersund, pensioner Per Söderberg now has urgent days to help his friends. 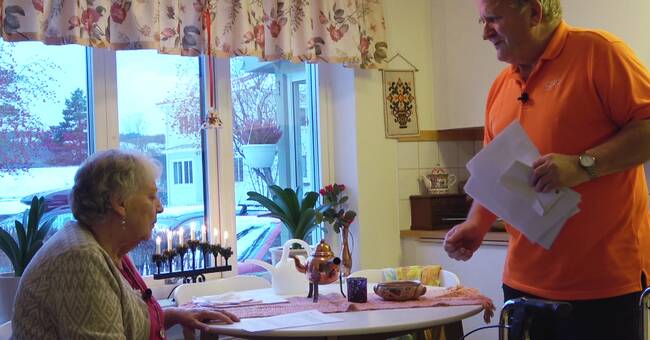 For the week, organizers can demand a vaccination certificate, a so-called covid pass.

And now many are ordering their proof home.

Since the announcement came on November 17, approximately 118,000 vaccination certificates have been issued per day.

The easiest way to order a certificate is with e-identification.

But if you do not have it, the certificate must be ordered via a special paper form.

Inside Per Söderberg's apartment in Östersund is now a bundle of such forms.

- There are many older people who are not digitized and who now need to use a form like this.

So that's why I wrote out several pieces and handed them out to those I know I want, he says.

Many have acquired a mobile BankID

The pandemic is driving digital development.

Since the start of the pandemic, 626,000 more people have acquired mobile BankID, which is by far the most common e-identification.

But in the elderly population, use is declining.

Among those who are 80 years or older, only a third have a mobile BankID.

And for them, it becomes more complicated now when covidpass is to be ordered.

In addition to the fact that they may need help to print the special form, the waiting time for manual applications is now several weeks, the e-health authority states.

"It's about being a fellow human being"

75-year-old Per Söderberg himself has a mobile bank ID.

But now he walks around the neighborhood and helps those who are not digitized.

- It's about being a fellow human being.

If I can help some, that's fine, he says.

One of those who receives a visit is 80-year-old Solfrid Ytterdal.

Solfrid Ytterdal has no plans to go to any major event, but still wants a pass in case something exciting comes up.

- It's soon to be Christmas so you never know, she says.