Average Spain at risk due to snow, rain, wind or coastal phenomena

A total of 31 provinces, plus the autonomous city of Melilla, will have this Sunday, November 28, extreme risk (red warning), important risk (orange warning) and risk (warning ... 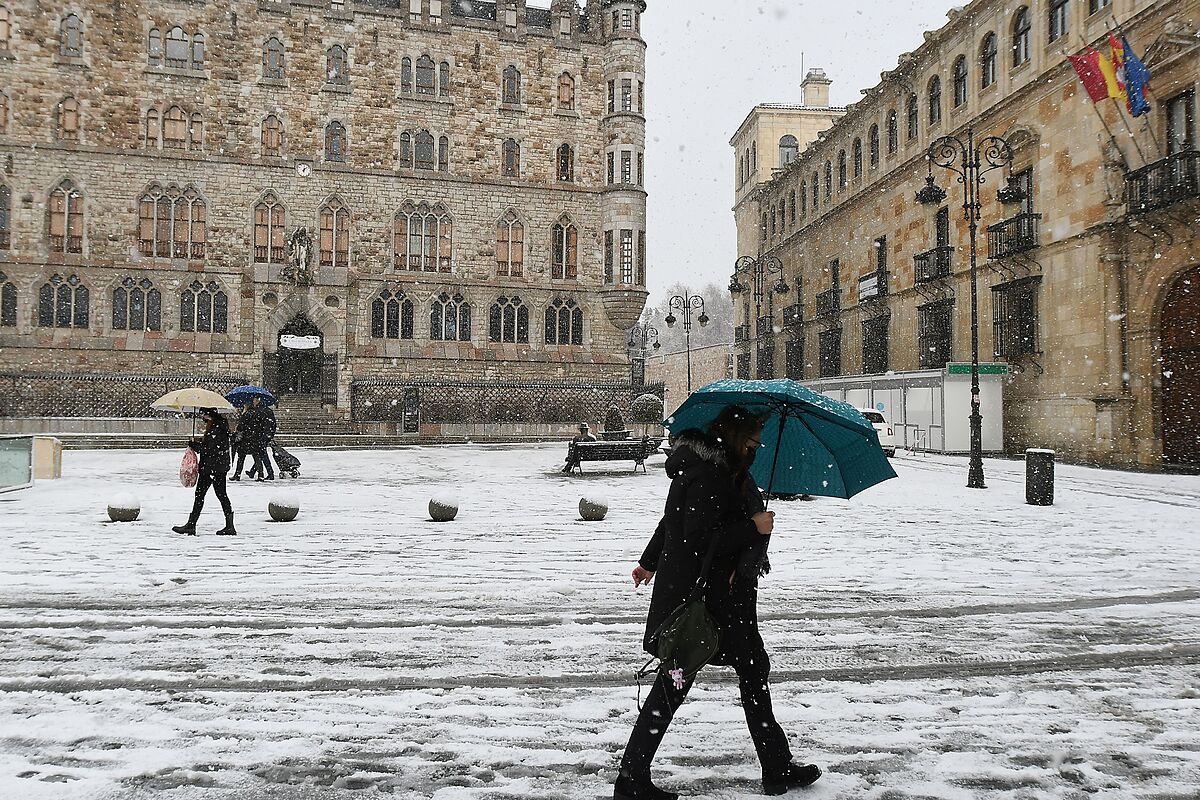 A total of 31 provinces, plus the autonomous city of

, will have this Sunday, November 28, extreme risk (red warning), significant risk (orange warning) and risk (yellow warning) due to

, as has been warned by the

(AEMET) that it expects the

accentuate the storm that affects almost the entire country.

Specifically, the red warning for snowfall will take place in

, where up to 25 centimeters of snow will accumulate throughout the day from 600-800 meters. To a lesser extent, the snow will affect

on an orange level

by accumulations of 30 centimeters above 500 meters and may reach, during the afternoon, 1,000 meters.

will be on an orange warning for snow due to accumulations of 20 centimeters from 6:00 p.m., as in

, where up to 37 centimeters of snow will accumulate. In addition, although in yellow notice,

will also have snowfall during the day and will leave around ten centimeters thick.

The swell, for its part, will put

due to northwest wind intervals of force eight, which will produce waves four meters high.

, during the afternoon, will have a yellow warning for this phenomenon that will cause winds from the west, and from the northwest also in Granada, of force seven.

will also have a yellow warning for waves due to the west and northwest wind of force seven.

In this sense, Asturias will also be on a yellow warning due to strong waves, due to the north-west winds of force seven that will cause waves of up to five meters in height.

The situation will be similar in

, with winds from the west and northwest of force seven that will cause waves of three meters. Also, Cantabria, La Coruña,

will have a yellow warning due to strong waves due to the northwest wind of force seven.

The winds will be strong in

, which will be on a yellow warning this Sunday due to strong gusts that may reach 80 km / h.

Rain will also appear in Asturias, Cantabria, Navarra, Guipúzcoa and Vizcaya, which will have a yellow warning for this phenomenon due to accumulated rainfall of up to 40 liters per square meter in 12 hours.

Huesca will have minimum temperatures of up to minus six degrees

Celsius, so it will have a yellow warning for cold.

In general, in the northern half of the peninsula, cloudy or overcast skies will predominate, with precipitations that will be abundant in the north of Galicia, the Cantabrian Sea, the upper Ebro and the western Pyrenees. Also, although of a weaker nature, it will rain in the rest of the northern third of the peninsula, Central and Iberian systems. In addition, in areas of the southern plateau, the Valencian Community and the Balearic Islands, cloudiness will increase, with probable showers and storms. In the rest of the Peninsula, the skies will be slightly cloudy while in the Canary Islands there will be cloudy intervals with a probability of showers in the north of the islands of greater relief.

The snow level, in the Pyrenees, around Navarra and the north of Aragon and Catalonia, will be around 300-500 meters high, which will rise to 500-1,200 meters from west to east. Also, in the rest of the northern half of the Peninsula, the snow level will rotate around 400-600 meters but will tend to rise in the afternoon to 900-1,400 meters in the east and in the center, while in the west It will be between 1,400-1,600 meters.

On the other hand, in the

Also this Sunday there will be widespread frosts in much of the interior of the peninsula, more intense in the mountains, mainly in the Pyrenees, where they may be strong.

Finally, the day will have a predominance of winds from the northwest and west in the Peninsula and the Balearic Islands, with strong intervals on the coast of Galicia, Cantabrian, under Ebro, Ampurdán, Balearic Islands and Alboran.

In addition, there will be winds from Poniente in the Strait, strong gusts in mountain areas of the northern and southeastern half, in the Canary Islands the trade winds will increase.

The situation in Navarra: prudence on the road

The Government of Navarra has insisted on its call for drivers to be prudent, especially if they have to circulate through mountain passes and roads in the northern half of the Community, as the extreme or significant risk of snowfall persists with the

possibility of produce accumulations of snow on the road

due to the extreme risk

that this Sunday there will be snowfalls in the central area of ​​Navarra with an accumulation of up to 25 cm. of snow above 600 meters. In the Pyrenees the warning is orange due to the significant risk of precipitation that can accumulate up to 35 cm. of snow above about 600-700 meters, being able to be reached in altitudes superior to 900 meters and locally 40 cm. or more.

On the Cantabrian slope there is also a significant risk of snowfall with accumulation of up to 15 cm. above the level of 500-600 meters. The Civil Protection Service has intensified the monitoring of the evolution of the storm, which for the moment "has not produced significant incidents beyond the difficulties to circulate on mountain roads", and the services of SOS Navarra and Fire Department of Navarra.

During the past night the circulation has been "very scarce" and in the registered accidents, in their majority leaving the road and collisions with animals, there have been no injuries.

It snows around the 400 meter elevation, with greater intensity and continuity in the Pyrenean area and intermittently in the rest of the northern half of Navarra.

During the early morning the storm has especially affected the eastern area, the Regional Executive has informed.

the Government of Navarra recommends not driving on mountain roads and advises drivers to exercise extreme caution on other roads.

It also indicates that it is convenient to check the status of the road network on the web www.carreteras.navarra.es or by calling 848 423 500.

remains closed to traffic in Guipúzcoa

due to the application of the winter road protocol.

Faced with this situation, vehicle traffic from Guipúzcoa bound for Navarra will not be able to access the Navarrese section of the A-15 from

For its part, heavy vehicle traffic from Navarra bound for Guipúzcoa that circulates on the A-15 highway will be intercepted at the

, where the roadblock for heavy vehicles is located, and will be returned by the same route. again towards Navarra.

The cut off of the A-15 is signaled through the variable message panels located on the road network so that vehicles, especially heavy vehicles, can modify their itinerary on the A-10 and A-1 towards Guipúzcoa.

, a traffic control device will be installed to divert heavy vehicles along these roads.

No incidents were recorded in the rest of the roads of the main network.