Activities in the spirit of Uzbekistan at the "Expo" .. enhance the role of women

The National Pavilion of the Republic of Uzbekistan at "Expo 2020 Dubai" revealed a variety of activities that shed light on scientific and economic achievements, Uzbekistan's efforts in empowering women and gender balance over the past few years, and the rich cultural heritage of this friendly country. 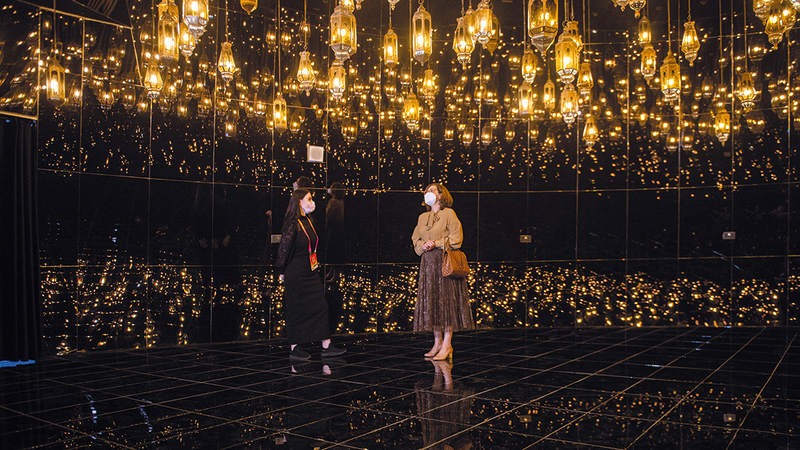 Activities in the spirit of Uzbekistan at the "Expo" .. enhance the role of women

The National Pavilion of the Republic of Uzbekistan at Expo 2020 Dubai has revealed various activities that highlight scientific and economic achievements, Uzbekistan's efforts in empowering women and gender balance, over the past few years, and the rich cultural heritage of this friendly country, diverse tourist attractions and opportunities. A promising investment, in addition to introducing the national development roadmap.

The National Pavilion of Uzbekistan, in cooperation with the Foundation for the Development of Arts and Culture of Uzbekistan, the official partner of the pavilion, presents a number of events aimed at introducing Uzbekistan's rich culture and heritage and its diverse capabilities, through "Expo 2020 Dubai".

Some Uzbek events will be organized in the Women's Pavilion at Expo 2020 Dubai, which is being held for the first time in the history of the World Expo, in cooperation with Cartier, as it represents the diverse women's pavilion activities, organized under the umbrella of the Emirates Council for Gender Balance, and sponsored by the campus H.H. Sheikh Mansour bin Zayed Al Nahyan, Deputy Prime Minister and Minister of Presidential Affairs, H.H. Sheikha Manal bint Mohammed bin Rashid Al Maktoum, Chairwoman of the Emirates Council for Gender Balance and President of the Dubai Women's Establishment, an international platform that brings together leaders and experts from around the world, to conduct a constructive dialogue aimed at To enhance the role of women in society, and highlight their role in global issues, with the exchange of experiences and the definition of studied strategies, to promote gender balance and empower women. When a woman flourishes, humanity flourishes.

Today, the National Pavilion of the Republic of Uzbekistan, in cooperation with the Emirates Council for Gender Balance, is organizing an inspiring session entitled "Women's Leadership in Promoting Gender Balance", in the Women's Pavilion, with the participation of Minister of Community Development Hessa Buhamid, Vice Chairman of the Board of Directors of the Foundation for the Development of Arts and Culture, member of the Equality Committee Gender balance in the Republic of Uzbekistan, Saeeda Mirziyoeva, Vice-President of the Emirates Council for Gender Balance and Director-General of the Media Office of the Government of Dubai, Mona Ghanem Al-Marri, and a number of international female personalities and leaders.

Saida Mirziyoeva stressed Uzbekistan's interest in opening up to various cultures, its keenness to adopt new positive experiences, and to share its successful experiences with countries in the world, noting the various means and mechanisms that her country uses to introduce its enormous cultural potential, through many activities on the international scene.

She pointed out that next year will mark the 30th anniversary of the establishment of diplomatic relations between Uzbekistan and the UAE, pointing out that the past three decades have been fruitful at all levels in a way that provided the opportunity to exchange knowledge and inspiration to achieve qualitative achievements in various fields.

"Based on that, our participation in the Expo 2020 Dubai is an important event that gives additional impetus to a high-level dialogue and strengthens partnership with the UAE and other participating countries, through its various national pavilions," Saeeda added.

For her part, Mona Al Marri said: "Expo 2020 Dubai is a unique platform to showcase the most important global achievements and gather creative minds from 192 countries participating in this global event, which coincides with the celebration of the golden jubilee of the UAE, and this exceptional event represents a suitable time to introduce With our national achievements over the past 50 years in front of visitors and officials from different countries of the world, and highlighting our creative plans for the next 50 years.”

She pointed out that "the celebration of the golden jubilee in the presence of the whole world on the land of the Emirates, pushes the Emiratis to look confidently towards the future with all their visions, ideas and capabilities to shape a better future for all."

The Vice-President of the Emirates Council for Gender Balance welcomed Uzbekistan's participation in "Expo 2020 Dubai", praising the hard work of the Foundation for the Development of Arts and Culture, especially its busy initiatives in the Emirate of Dubai, which comes within the framework of cooperation and strategic partnership between the UAE and Uzbekistan in various fields and brotherly relations between the two countries. The two friends, the leadership and the people, pay tribute to the rich cultural heritage and ancient traditions of the Republic of Uzbekistan.

For her part, the Executive Director of the Foundation for the Development of Arts and Culture, Jayan Umarova, considered the Foundation's participation in this event, which is being held for the first time in the Middle East, as a unique opportunity to introduce the peoples of the world to the rich heritage of Uzbekistan, and to remind the extent of the cultural ties that bring it together with the Arab world and Islamic civilization. Whole formed over the centuries. She added: "Based on this cultural and civilizational aspect as a basis, we present Uzbekistan in a new way, as a well-developed country with innovative capabilities, which helps to create a better future for future generations, in the interest of all humanity and the formation of common values."

Yesterday evening, the first international performance of the ballet “Lazy .. Show of Soul and Love” was presented at Dubai Opera, which highlights the cultural and historical heritage of Uzbekistan, through one of the most popular performances in this country, which dates back to 3000 years, and it is an ancient show full of In legends and embodies ancient folk wisdom, it is directed by the show designer Raimundo Rebic, and performed by the Alisher Navoi State Academic Bolshoi State Academic Ballet Theater in Tashkent in September 2019 and was included by the UNESCO International Committee for the Safeguarding of the Intangible Cultural Heritage in the List of the Intangible Cultural Heritage of Humanity.

Tomorrow, he will also organize a concert for pianist Behzod Abdul Rahimov, in the Jubilee Park of "Expo 2020 Dubai", during which he will present pieces from the famous classics of Beethoven, Chopin, Mussorgsky and Tchaikovsky.

Abdul Rahimov won the prize of the International Piano Competition in London, and studied music at the Yuspensky School of Music in Tashkent.

The Foundation for the Development of Art and Culture will participate in the “Al Burda” Festival, within the framework of the “Expo 2020 Dubai” exhibition from December 19 to 21, with the presentation of folkloric music and Uzbek films, in addition to participating in a panel discussion entitled: “Urban Life: Transformation of the Islamic Space.” .

Al Burda Festival is a multidisciplinary platform organized by the UAE Ministry of Culture and Youth.

The festival's mission is to inspire the younger generations to connect more deeply with their cultural identity, and to enhance the position of Islamic culture in society.