Wheel superiority: what is unique about Russian armored vehicles on the Boomerang platform

In the spring of next year, the state stage of testing the latest combat vehicles based on the Boomerang platform will start in Russia, said Lieutenant Colonel Yuri Chikin, head of the 154th military mission at the Arzamas machine-building plant. Today the line of armored vehicles on the Boomerang chassis is represented by the K-16 armored personnel carrier and the K-17 BMP. The vehicles have higher characteristics in terms of security, firepower and mobility than their predecessors - BTR-80 and BTR-82A. Experts expect that the promising armored vehicles will significantly enhance the combat potential of the Russian motorized rifle forces. In addition, according to analysts, in the future, new types of vehicles for the Russian army can be created on the Boomerang chassis. 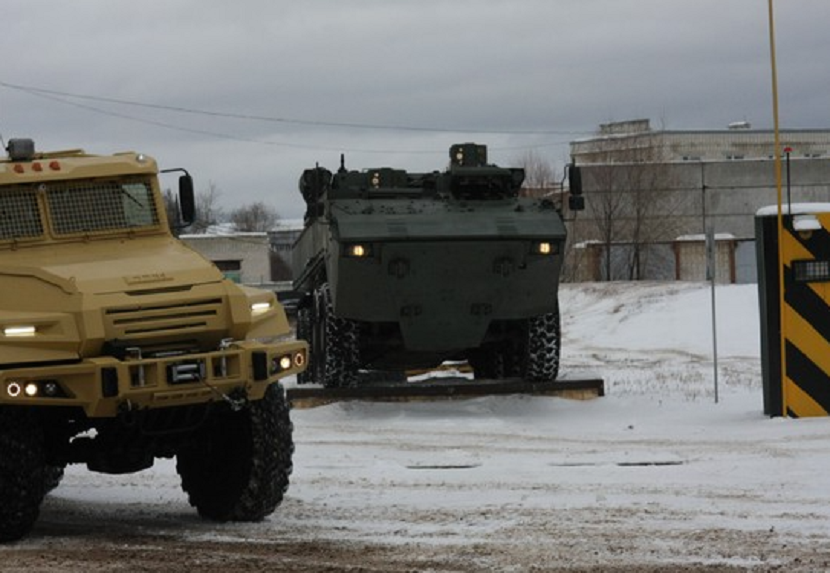 State tests of the latest armored vehicles based on the Boomerang medium unified combat platform (UBP) are scheduled to begin in the spring of 2022.

This was stated by the head of the 154th military representation at the Arzamas Machine-Building Plant (AMZ), Lieutenant Colonel Yuri Chikin.

His words are quoted by the press service of the RF Ministry of Defense.

"Currently, prototypes are being finalized for presentation to state tests, which are planned to begin in March - April 2022," Chikin said during a visit by Deputy Defense Minister Alexei Krivoruchko to AMZ.

Located in the Nizhny Novgorod region, the plant is part of the Military Industrial Company LLC (MIC), which develops machines at the UBP.

"Boomerang" is an eight-wheeled chassis on which the K-16 armored personnel carrier and the K-17 armored infantry vehicle are mounted.

This technique should soon enter service with the Russian army.

Moscow is also ready to supply it to its partners in the area of ​​military-technical cooperation.

Armored personnel carriers and infantry fighting vehicles on the Boomerang chassis are largely unified, but differ in the range of weapons and a number of tactical and technical characteristics.

The vehicle uses a 12.7 mm Kord machine gun as its main armament.

According to Rosoboronexport, a new layout is implemented in the armored personnel carrier, in which the controls are in the front left, and the engine compartment is in the front right.

The K-16 combat complex is located in the middle, the landing squad is in the rear of the vehicle.

The armored personnel carrier can accommodate up to 11 personnel, the embarkation and disembarkation of military personnel is carried out through the upper hatches, aft door or ramp.

The advantages of the K-16 include an independent suspension, an economical 750 hp diesel engine.

and an automatic transmission.

The security of the crew and the landing force, according to Rosoboronexport, is ensured by an armored V-shaped hull, a filtering unit and an automated fire-fighting system.

"Boomerang" has multi-level protection against kinetic ammunition and explosive devices, which can change depending on the threat and the needs of the customer, "- says the company's website.

In February, in an interview with Interfax, the general director of the military-industrial complex, Alexander Krasovitsky, said that the K-16 rightfully belongs to the new generation of armored vehicles.

“In this class, this is a fundamentally new car with a high level of protection.

In addition, all modern achievements of science and technology have been used in the design; it can be said that a breakthrough in engineering is laid in this machine.

If necessary, you can control the machine remotely, that is, the chassis information and control system supports all the functions of robotic movement, ”explained Krasovitskiy.

According to him, a new control system and transmission were developed for the K-16.

In addition, she installed new test benches and modernized the entire production cycle.

At the end of November, Krasovitsky's statement was published on the page of the Military Industrial Company on Instagram that the most complex parts for cars on the Boomerang chassis are made on a 3D printer.

This allows you to significantly reduce the cost of manufacturing prototypes of equipment.

In a commentary to RT, military expert Alexei Khlopotov said that the vehicles on the Boomerang platform will be replaced in the troops by the BTR-80 and BTR-82A, which are now in service with the Russian army.

According to him, both cars have "Soviet ancestry" and need to be gradually replaced.

“The BTR-82A is a decent and very modern machine, but it was created on the basis of the Soviet“ eighty ”(BTR-80. -

Meanwhile, in the modern theater of hostilities, the requirements are becoming more stringent - first of all, to the level of protection of the crew and the landing force, ”Khlopotov explained.

According to the expert, the K-16 meets all the security standards necessary for its class.

Elements of ceramics and other advanced materials are integrated into the design of the vehicle's armor, Khlopotov emphasized.

More armed than the K-16, the variant of armored vehicles based on the "Boomerang" is the K-17.

The newest BMP is equipped with the Boomerang-BM module with a 2A42 30-mm automatic cannon and launchers of the Kornet-D anti-tank missile system, which are installed on the sides of an uninhabited tower.

According to Rosoboronexport, the K-17 can be used to transport motorized rifle troops, special forces and marines.

The arsenal of infantry fighting vehicles allows you to provide fire support to servicemen, destroying manpower, lightly armored and heavy equipment of the enemy, as well as low-flying targets.

On the website of the military-industrial complex it is reported that the anti-tank weapons complex can hit targets at a distance of up to 10 km.

"Kornet-D" is able to fight not only with the ground forces of the enemy, but also to fire at low-flying aircraft, helicopters and UAVs.

The Boomerang-BM module also has a wide combat potential.

This complex is equipped with a new all-day automated fire control system, which simultaneously searches for targets "in different spectral ranges" and is capable of detecting camouflaged enemy targets using an optical locator.

At the same time, according to the military-industrial complex, the K-17 has a decent level of protection.

The BMP is equipped with "means of reducing the vehicle's signature, passive armor protection, as well as active protection and jamming complexes."

An important element of the electronic filling of the K-17 is the on-board information and control system (BIUS), built on a block-modular principle, and digital communication facilities with the ability to exchange data in real time.

In addition, the BMP contains a software and hardware complex that ensures the integration of the vehicle into a unified tactical control system (ESU TZ) and "work in a single information space for combat control."

Among the advantages of their brainchild, the specialists of the military-industrial complex consider the high indicators of mobility of the K-17.

In addition to BIUS, they are provided with a new powerful and economical power plant with an automatic transmission, an original transmission, independent torsion bar suspension of wheels and water-jet propellers with a mechanical drive.

The power plant also includes a cooling and preheating system.

According to Rosoboronexport, the vehicles mounted on the Boomerang unified chassis fully meet the modern and future requirements of warfare.

The military-industrial complex emphasizes that the "Boomerang" received a layout scheme that has no analogues in Russia.

It provides an ergonomic landing position, optimal equipment placement and the use of "differentiated modular protection".

“The modular design of the vehicle makes it possible to change the composition of a specific vehicle of the family by installing various weapon systems, active and passive protection systems, depending on the designation of the sample and the customer's requirements,” reads the materials of the Military Industrial Company.

In turn, Aleksey Khlopotov says that an uninhabited fighting compartment has become one of the key innovative solutions implemented in armored personnel carriers and infantry fighting vehicles.

The analyst believes that such vehicles will be suitable primarily for motorized rifle troops.

“The Boomerang platform has very high mobility and maneuverability indicators, although the K-16 and K-17 are significantly heavier than their predecessors due to the larger volume of armor.

In a conversation with RT, the editor-in-chief of Arsenal of the Fatherland magazine, Viktor Murakhovsky, noted that armored vehicles on the Boomerang chassis would significantly enhance the combat potential of motorized rifle troops thanks to remote-controlled weapons and equipment that allow integrating K-16 and K-17 into ESU TZ.

The vehicle is floating, so it provides effective overcoming of water obstacles, and the wheelbase provides a large resource compared to tracked vehicles and high rates of march, "Murakhovsky explained.

He also believes that in the future new types of vehicles for the Russian army can be mounted on the Boomerang chassis.

“Now infantry fighting vehicles and armored personnel carriers will go for state tests, but it is clear that command-staff vehicles, vehicles of engineering troops, chemical troops, signal troops can be created on the basis of this wheeled platform,” Murakhovsky summed up.