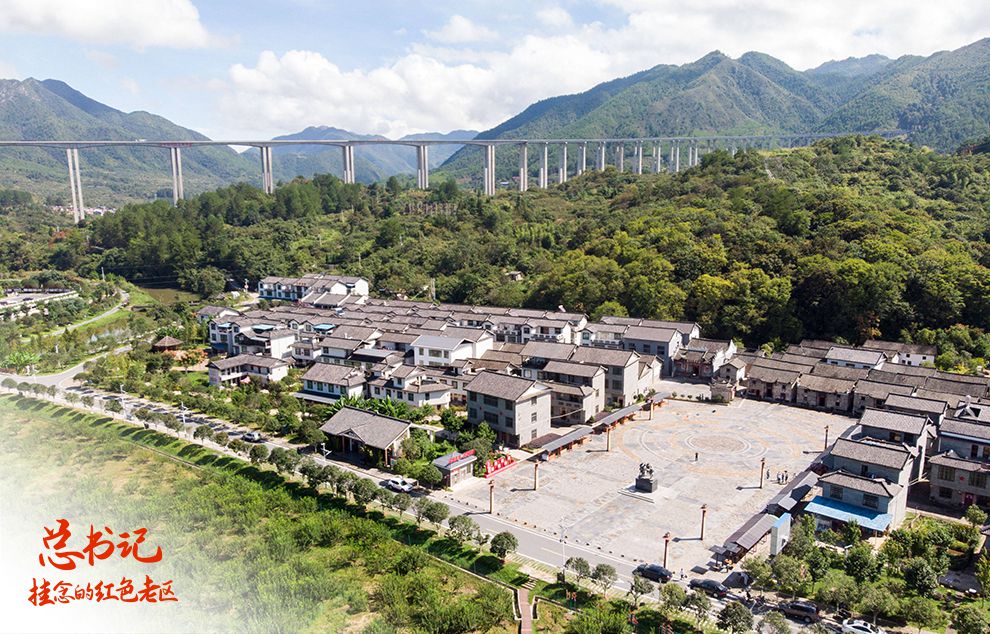 While working in the local area, he has been paying attention to the development of the local old districts and the living conditions of the people in the old districts.

Since the 18th National Congress of the Communist Party of China, the general secretary's concern for the old district has remained the same.

He frequently set foot on the red land to visit and sympathize with the people in the old districts.

Study every day at the junction of Hunan and Jiangxi provinces, the Luoxiao Mountain Range stands tall and the turquoise Chushui River is undulating.

Under the shade of green water and green mountains, in a village with an area of ​​only 0.92 square kilometers, the eight red words "Half a Quilt Warm China" on the background wall of green plants are particularly eye-catching.

In early November 1934, the Central Red Army came to Rucheng, Hunan for rest during the Long March, and one of the troops entered the Shazhou Yao Village.

"In Shazhou Village, Rucheng County, Hunan, three female Red Army soldiers stayed at the old man Xu Jiexiu's house. Before leaving, they cut off half of their only quilt and left them. The old man said, what is the Communist Party? The Communist Party has one of its own. The quilt, half of it should be cut for the common people."

On October 21, 2016, at the meeting to commemorate the 80th anniversary of the victory of the Red Army's Long March, General Secretary Xi Jinping told this story.

On September 16, 2020, a day of rainy autumn, General Secretary Xi Jinping rushed directly to Shazhou Yao Village when he arrived in Hunan.

He said: "Today, I came here not far from Beijing to visit the folks, and I also came to receive education."

"General Secretary, the changes in our Shazhou in recent years have been earth-shaking." In the home of Zhu Xiaohong, the grandson of Xu Jiexiu, the protagonist of the "Half Quilt" story, the villagers expressed their feelings to the General Secretary.

Zhu Xiaohong's family used to be a poor household in the village.

In 2017, through participating in the chef skills training organized by the local party committee and government, Zhu Xiaohong had a great skill and became the first person to open a local restaurant in the village, and his life became a little richer.

"The changes in your family also show a truth. The Communists have always insisted on serving the people, and promised to be fulfilled." The general secretary was very pleased to see that the villagers had a good life.

He said to everyone: "Let the Chinese people stand up to liberation and embark on the road of well-off and happiness. If we do what we say, we will definitely go on and fulfill the party's vows and promises."

The changes of Zhu Xiaohong's family are the epitome of the development of Shazhou Yao Village.

The story of "half quilt" spreads across the country. Around this red story, the poverty alleviation industry in Shazhou Yao Village has been developed to create a red scenic spot and develop rural tourism.

In 2017, the Shazhou Red Tourist Attraction with the theme of the "half quilt" story was completed. Two years later, the scenic area was upgraded to a national 4A-level tourist attraction.

Tourism is booming, and the villagers of the Shazhou Yao village, whose average arable land is less than 0.7 acres, all have a "tourism meal".

Some people work in the scenic area, some set up farmhouses and homestays, some sell local products, and others set up fruit picking gardens relying on specialty products such as loquat and crystal pear...

The small Shazhou Yao village will receive more than 700,000 tourists in 2020 alone, and almost every villager will tell the story of "half quilt".

This year, the per capita disposable income of villagers reached 15,000 yuan, and the village collective income reached 550,000 yuan.

Red tourism, green mountains and rivers, and characteristic industries are here to paint a beautiful picture of living and working in peace and contentment.

"In the past, the Red Army gave us half a quilt, but now the party has brought us happy days." The plain words express the feelings of the villagers.