The President of the Emirates Oncology Society, Dr. Humaid bin Harmal Al Shamsi, stated that early detection of cancer, personalized treatment, and genetic directed, the triangle of recovering from the disease and reducing the deaths resulting from it. Al Shamsi explained to "Emirates Today" that while studies indicate that the future 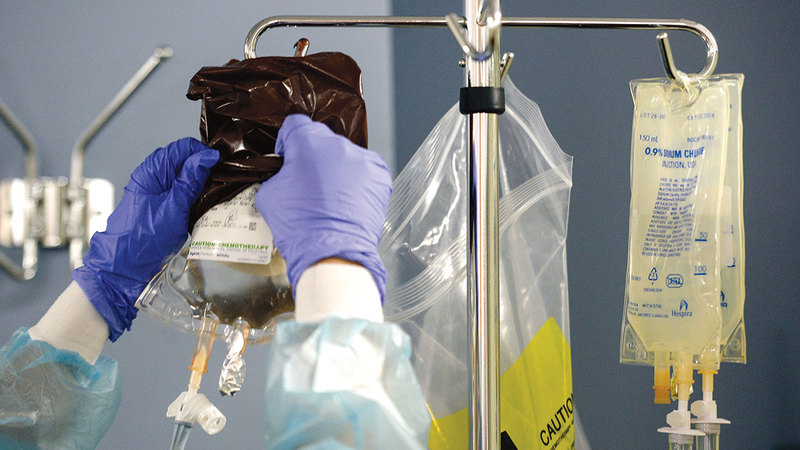 The President of the Emirates Cancer Society, Dr. Humaid bin Harmal Al Shamsi, stated that early detection of cancer, personalized treatment, and genetic directed, is the triangle of recovering from the disease and reducing the deaths resulting from it.

Al Shamsi explained to "Emirates Today" that while studies indicate that the future will witness a rise in cancer rates, the new techniques and treatment methods that have been adopted, some of which are in their last stages before final approval, will contribute significantly to reducing the disease. And enhance the chances of treatment from it, especially if it is discovered in its early stages.

According to Al Shamsi, breast and thyroid cancer are the most prevalent types of cancer among women in the country, while colon and prostate cancer top the list of the most common cancers among men, and the rates of those diagnosed with the disease in general increase by 60% compared to 40% among women.

He said that the UAE is one of the first countries in the world in licensing and providing modern medicines, including cancer treatment drugs, to its citizens and residents, and that most of the doctors specializing in the field of cancer treatment are qualified with global expertise, and the state provides all comprehensive medical examinations for early examination of cancer, Including free breast, prostate, colon, cervical and lung cancer.

He stated that the future holds optimistic aspirations for early diagnosis of cancer through a simple blood sample that may detect more than 50 types of cancer, which improves early cancer screening, enhances chances of recovery and reduces deaths.

Al Shamsi conducted a detailed study in which he monitored the stages of development of cancer treatment in the country over the past 50 years, coinciding with the country's fiftieth anniversary celebrations, through 70 specialized research studies in this field.

According to the study conducted by Al Shamsi, there were no documented sources for cancer treatment before the establishment of the union in the sixties or seventies of the last century, when the population was turning to folk medicine to treat many medical conditions, including cancer, until the opening of Tawam Hospital in Al Ain, to be the first facility Cancer care in the United Arab Emirates.

He added, “In August 1983, Mafraq Hospital was opened and provided medical treatment for various specialties including cancer care. By September 1983, Mafraq Hospital opened chemotherapy and radiation services, and the radiation service was terminated in 2007, but the medical oncology service continued until November.” 2019, and Sheikh Khalifa Medical City in Abu Dhabi, which was established in 2005, which is one of the largest providers of leukemia treatment services in the country.”

He stated that Dubai Hospital is the third government hospital that was established in 1983, and provides services in oncology, pediatric oncology and hematology.

The President of the Emirates Oncology Society, Professor Humaid bin Harmal Al Shamsi, explained that the Dubai government is working to establish the Hamdan bin Rashid Charitable Hospital for Cancer Patients, which includes pioneering expertise in the field of prevention, diagnosis and treatment under one roof.

The hospital will provide pioneering services for cancer patients in the outpatient departments, ambulatory and diagnostic services, and for inpatients, in addition to surgical treatments.

The hospital is expected to open in 2024, and it will be the first hospital in the region to be built entirely with prefabricated units, with a capacity to treat 30,000 patients annually, and it will be a world-class medical facility, and the design of the hospital will be environmentally sustainable.