Without demerit, France was beaten Saturday in Innsbruck by Great Britain (2-1) and thus almost drew a line on the quarter-finals of the Davis Cup, even if mathematically it can ... 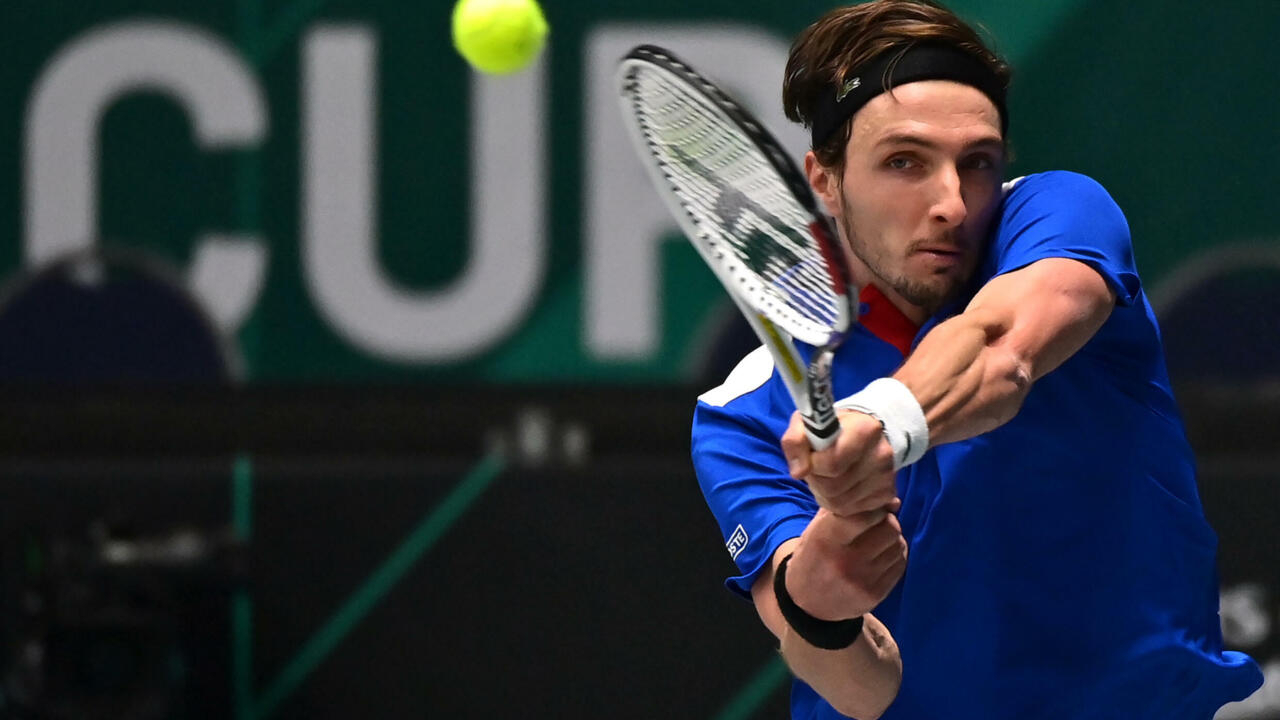 "There is a lot of disappointment not to have won, admitted the French captain Sébastien Grosjean. We had chances in the two singles, unfortunately it did not go in our direction."

The so disparaged new formula has this paradoxical fact that it allows the Blues not yet to be officially eliminated when they have lost three of the four singles played in the group stage.

Facing Evans, "Manna" felt that the fate of the meeting had played "very little".

"A little bit of success"

"I made mistakes at key moments and when it was tight at the end of the game, he was better than me physically," he said.

But at 5-5 in the first set "it didn't depend on him, it only depended on me and my service," said the Frenchman.

"I rushed a bit, maybe I lost my temper a bit and it played out very little," Mannarino said.

The French Adrian Mannarino against the Briton Daniel Evans in the Davis Cup, November 27, 2021 in Innsbruck JOE KLAMAR AFP

"He gives me a winning return with one hand, topspin, on one of my first balls. It happens to him maybe once a year and he does it at 5-5 in the first set, on an important point. times it plays out a little, also a little bit of success, "he continued.

A "miraculous half volley" and a serve "off the line" for Evans, "faults of a few inches" for Mannarino and so the second set and the game were lost.

"He took his chance, maybe a little more than me and that made the difference," according to the Habs.

So much so that for his first Davis Cup match, Rinderknech found himself with his back to the wall as he entered the court to face Norrie.

"It was very hard, and I would have liked to go to the third set to see what would have happened," he commented.

Yes, but Norrie wanted to avoid this decisive set and he scored the decisive point to secure the British victory.

The games being made, the novice was lined up in doubles alongside Nicolas Mahut, replacing at the last minute the usual friend of the latter, Pierre-Hugues Herbert.

"From the moment it was all over, I was asked if I wanted to play the double," explained Rinderknech, illustrating the few hopes on the French side of a qualification for the quarters.

Grosjean said after the meeting that the choice to field Rinderknech instead of Herbert was forward-looking and had nothing to do with Herbert who "is doing very well".

"After this single where he (Rinderknech) did not come far from winning this second round, the idea was to start again on the double to finish on a good note, to give him more experience in Davis Cup", explained the captain.

A few minutes after his single, therefore, Rinderknech played a great doubles match to save France's honor with a 6-1, 6-4 victory over the dreaded British pair Joe Salisbury / Neal Skupski.

"We especially did not want to take 3-0, said Mahut. The jersey of the France team is important, even at 2-0, even when we are eliminated. It is not a fun game to play, but we had to respect this jersey and I think we did it well ".

It will be necessary to wait until Sunday and the end of the group stage to be fixed on the fate of the Blues.