Covid, the Rugby Zebras blocked in South Africa for the Omicron variant

The 43 elements that make up the delegation, including 30 players and 13 of the staff, carried out the molecular swab and it is negative 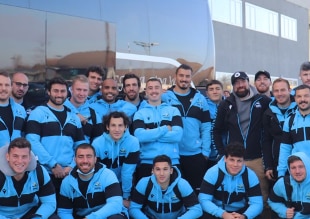 November 27, 2021 The players and staff of Zebre Rugby, the Parma-based franchise that plays in the United Rugby Championship, which also includes South African, Welsh, Irish and Scottish teams, are stuck in a hotel in Cape Town, waiting for return to Italy, given the evolution of the Covid situation in South Africa.

Due to the spread of the new Covid-19 variant (B.1.1.529), the country has been included in the list of countries at risk by the United Kingdom and the European Union.

The Zebras left on Wednesday for South Africa where a two-week mini-tour was scheduled: they were supposed to play today in Cape Town against the Stormers and on 3 December in Durban against the Sharks. However, the organizing committee of the tournament has decided to cancel the competitions and the restrictions imposed for the spread of the new Omicron variant have started.

The team is locked in the hotel waiting to understand what to do and above all how to return to Italy as the Minister of Health has signed an order forbidding entry to Italy for those who have stayed in South Africa in the last 14 days.

Dalai: "We are safely closed in a bubble"

"We are safe - reassures from Cape Town Michele Dalai, president of the club, who is following the team - the Zebras are fine: we are closed in a bubble, we just went to train and we were outdoors, with masks and all the necessary precautions. Here the situation is very calm, at least from the outside. For now we remain in our bubble and wait to return ".

The 43 elements that make up the Zebras delegation in South Africa, including 30 players and 13 staff, carried out the molecular swab and it is negative.

🎙️ "We are fine and safe in our hotel. We have maintained all the necessary precautions and we're waiting to know when we'll come back home. The boys are calm , as the current situation in #CapeTown "#WeAreZebre pic.twitter.com/5njRRZtAvm

The return looks complicated: it is not yet clear whether players and coaches will have to quarantine or not and if they will have to do it in South Africa or Italy. Not to mention the fact that, currently, scheduled flights from South Africa to Italy have all been canceled.

The events of Covid have often crossed, in the last year and a half, that of the Parma team: the symbol of this event was the flanker, who also plays for the national team, Maxime Mbandà who, when the activity was suspended on the occasion of the first lockdown, was he worked as a volunteer for the transport of the sick in a voluntary association in Parma, one of the cities most affected by the first wave of the pandemic.

In addition to the Italian team, two Welsh and one Irish teams are also blocked in South Africa, after the UK government announced the blocking of flights from South Africa to counter the spread of the Omicron variant. These are the Welsh from Cardiff and the Scarlets and the Irish from Munster. "Following the news of a new variant of Covid in South Africa, Scarlets would like to assure families and friends that we are making every effort to bring our group back to the UK as soon as possible," the Scarlets said in a statement. In a tweet, Cardiff also said that "we are trying to repatriate our staff as soon as possible". Munster on Friday tweeted: "We are all fine and safe in Pretoria. We are working with theURC on the ongoing situation relating to Covid-19 and we will provide an update as soon as we know more ".

Also Problems on South African Golf Tour Schedule. The British and Irish players withdrew from the Joburg Open before the second round on Friday to try to return to Europe as soon as possible. The organizers of the Sunshine Tour and DP World Tour subsequently announced a series of changes to the current Summer Swing of tournaments in South Africa following the country's inclusion on the travel red list of several countries due to concerns about a new variant. COVID-19 and the effect this will have on the participation of professional golfers. The Joburg Open, currently underway at Randpark Golf Club, will run as scheduled and conclude on Sunday as scheduled.

The South African Open Championship, which will be played at the Gary Player Country Club in Sun City from 2-5 December, will also be played as scheduled.

Instead, the Alfred Dunhill Championship, which was to be played at Leopard Creek Country Club December 9-12, was canceled after lengthy consultations due to the negative effect travel restrictions would have on the field.