Yemeni forces begin the second phase of their military operations in Ibb, Taiz and Hodeidah

The joint Yemeni forces continued their incursion into the Jabal Ras Directorate, in the southeastern countryside of Hodeidah, and advanced about 10 km through the Al-Adeen-Jabal Ras road, bypassing the obstacles set by the Houthi militias, represented in the ciphering of ferries, and the planting of more mines and explosives. 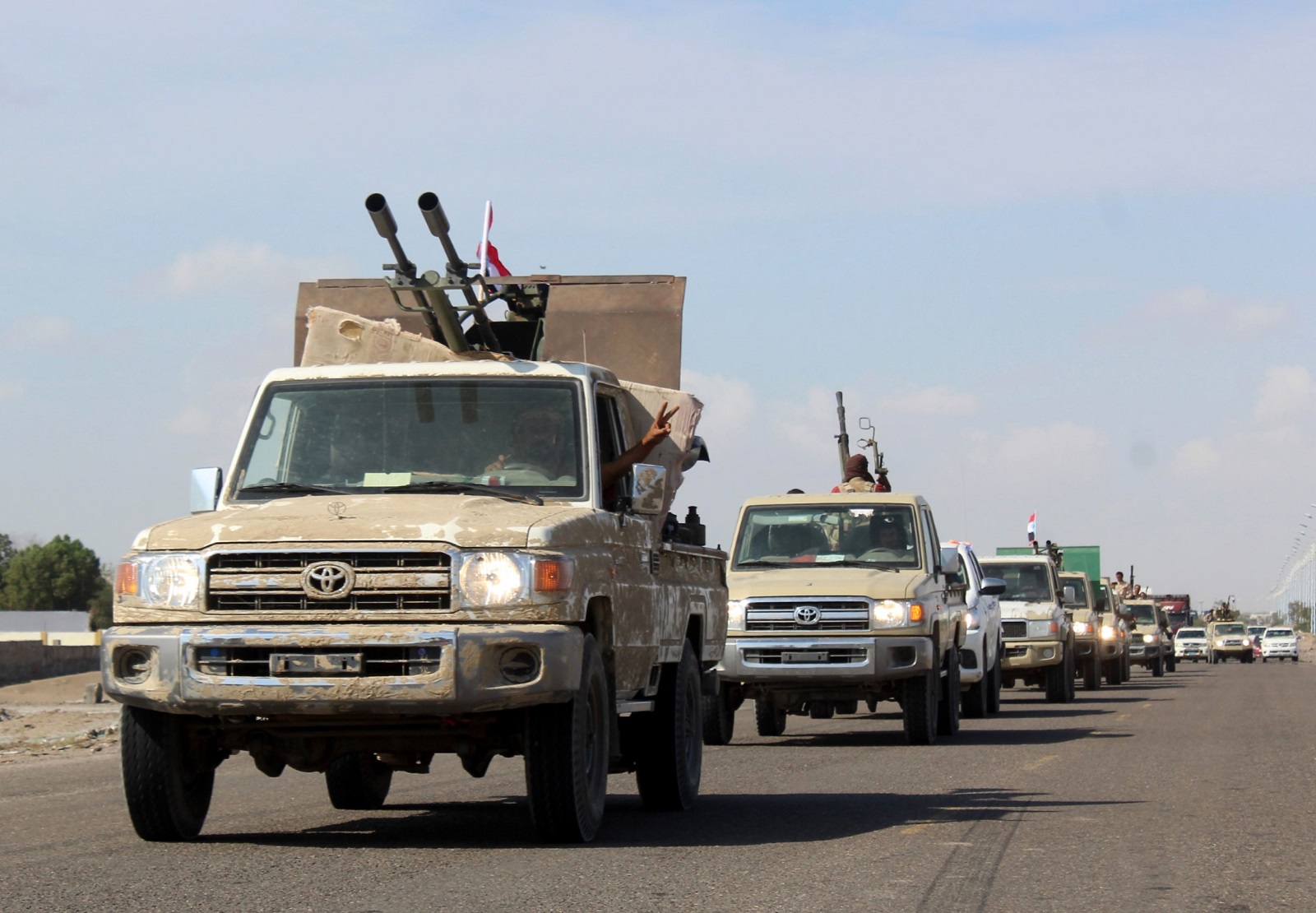 Yemeni forces begin the second phase of their military operations in Ibb, Taiz and Hodeidah

The joint Yemeni forces continued their incursion into the Jabal Ras Directorate, in the southeastern countryside of Hodeidah, and advanced about 10 km through the Al-Adeen-Jabal Ras road, bypassing the obstacles set by the Houthi militias, represented by ciphering ferries, and planting more mines and explosives.

Field sources confirmed that the joint Yemeni forces began the second phase of their military operations, through their new theater of operations, in the governorates of Hodeidah, Taiz, and Ibb, where they were able to secure a number of corridors and roads towards the Jabal Ras district, southeast of Hodeidah, as well as progress in the Maqbna district, west of Taiz. .

The sources indicated that the joint Yemeni forces completed securing the liberation of the Hays district and the surrounding mountains, and continued their incursion into the Jabal Ras district, after combing Wadi Al-Marir, while preparing to penetrate into Al-Jarrahi, after securing the Al-Baghil area on the outskirts of Al-Jarrahi Center.

The militias had blew up six bridges and 10 ferries on the Al-Adeen-Jabal Ras and Qamma road by planting many mines and explosives, to impede the progress of the joint, but they failed to do so, as the engineering units worked to pave the way and clear the mines, which allowed the forces to advance smoothly.

While the engineering teams of the joint forces continued to clear Houthi minefields in the liberated areas east of Hays district, the teams of the Saudi project to clear mines in Yemen “Masam” managed to dismantle 11 explosive devices, and remove five Houthi mines, which were planted in Abu Bakr Al-Siddiq School in Al-Dahiya village, Al-Khokha district, south of Hodeidah.

In Taiz, the joint forces continued their incursion into the Maqbna district, securing the Al-Madrouba area and Customs Saqm by controlling the "Mount of the Headed Mountain", overlooking those areas, and the spoils of a quantity of weapons left by the militias there, including communication devices, and monitoring and control technology.

Field sources confirmed that the joint is advancing in the vicinity of Customs through two axes "southern and eastern", and now controls all the heights surrounding the Hays district from the eastern side, thus completing the first phase of its military line in those areas.

The sources pointed out that the second phase of the operations of the joint Yemeni forces began at dawn today, to complete the liberation of the Maqbna district, west of Taiz, by reaching the strategic city of Al-Barh, and joining the Al-Kadha Front on the southeastern side of the district, as well as liberating the districts of Jabal Ras and Al-Jarrahi, southeast of Hodeidah.

In the Sharaab al-Runah district, north of Taiz, local sources confirmed that Houthi leaders and elements fled from the Freedom Market, located between the administrative borders of the governorates of Ibb and Taiz, while the people of the area deliberately removed the Houthi slogans from the market, as the joint approached the area through Wadi Nakhla.

In Sharaab al-Salam, directly adjacent to Ibb governorate, local sources confirmed that the Houthi militia had created a combat site in the al-Homsi area, and sent human reinforcements and combat equipment to it, as part of its readiness to repel the joint.

In Marib, the Yemeni army forces and tribes, backed by the fighters of the Arab coalition, managed to defeat the Houthi militia to the Samra al-Zeeb area in the al-Juba front, west of the province, located 20 km from al-Balaq, the first line of defense from the center of the province, where the Houthis were inflicted with 11 deaths, including snipers.

Field sources confirmed that battles took place between the two sides during the past few hours, on the fronts of Wadi Dhanna, during which the Houthi militias were defeated towards the Samra al-Zeeb area, behind an area in Maisarah Matb al-Amud, with the great support of Arab coalition fighters to support legitimacy, which had an active role in The battles of the past two days thwarted the Houthi attacks on the fronts south of Marib.

The Arab coalition had indicated that it had greatly contributed to thwarting a large-scale attack by the militias towards the city of Ma'rib from the southern side, and made it clear that it had carried out eight targeting operations in Marib against Houthi mechanisms that led to the destruction of five of them, leaving 60 Houthi deaths.

Field sources confirmed that coalition fighters targeted Houthi reinforcements south of Marib, which left many coup elements dead, including the prominent Houthi leader "Abu Badr al-Din al-Mu'ayyad", one of the arms of Abdul-Malik al-Houthi, the militia leader, as well as Houthi leader Brigadier General Abu Ahmed al-Shajari, and a number of their members.

In Sanaa, the fighters of the Arab Coalition to Support Legitimacy in Yemen demolished a Houthi position and fighting points in the Yemeni capital, Sanaa, during which a qualitative Houthi weapons depot, including ballistic missiles, drones, and strategic weapons, were destroyed in the presidential camp south of the city.

For its part, the coalition announced that it had carried out a military operation for legitimate targets belonging to the Houthi militia in response to the threat and after an accurate intelligence operation, noting that movements were monitored to transfer qualitative weapons after the recent targeting of the camp, indicating that terrorist leaders and qualitative capabilities are legitimate targets around the clock.

In Al-Jawf, field sources confirmed the arrival of qualitative military reinforcements to the fronts of the northern axis of the governorate, and the Raghwan district, which is administratively affiliated to the Marib governorate, close to the border with Al-Jawf, to support the fronts extending from east of Bir Al-Maraziq to the Al-Alam area, from which the militias are trying to launch attacks towards the city of Marib, After its failure to penetrate the fronts south and west of the city during the past months.

The Yemeni army had shot down a booby-trapped drone launched by the militias towards the northern axis of the governorate.

On the other hand, military sources in the Sixth Military Region in Al-Jawf confirmed that extensive military arrangements had been made in the region’s command, and the leaders of its operations accelerator axes, noting that similar arrangements took place in the third and seventh regions in the vicinity of the capital, Sana’a, that will change the equation. The field is greatly enhanced, especially since it is heavily supported by the leadership of the Arab coalition to support legitimacy in Yemen.

In Saada, the army forces in the Baqim axis launched an attack on Houthi positions in the district, leaving militias dead and wounded.