The EU stops all travel from South Africa due to the new virus variant omikron. Preliminary tests show that the variant carries a higher risk of re-infection compared to other virus variants, the WHO states. 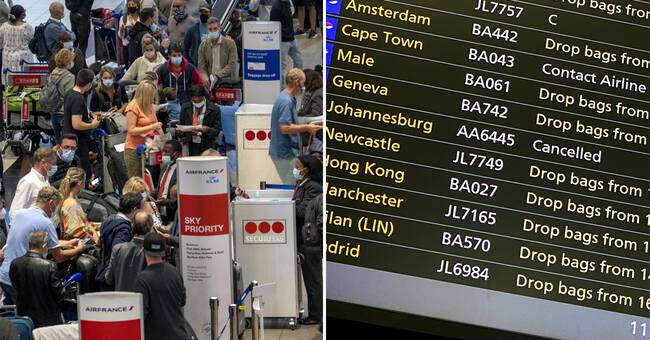 It was during a hastily convened press conference in Johannesburg that a group of South African researchers first sounded the alarm on Thursday.

A new virus variant with an unusual constellation of mutations had spread rapidly in the populous province of Gauteng.

On Friday, the WHO announced that the variant has now spread to almost all provinces in South Africa.

Around the same time, Europe received its first confirmed case.

The virus variant has been found in a person who traveled from Egypt to Belgium just over two weeks ago.

The new variant has been classified as a so-called "virus variant of special significance" or Variant of concern (VOC), which is the most serious classification made by the WHO.

Omikron, as the new variant was named, thus becomes the fifth virus variant to be classified according to alpha, beta, gamma and delta.

Whether omicron is more contagious than other variants is not yet clear, but the WHO announced on Friday that preliminary data indicate that it entails a higher risk of re-infection compared with other so-called VOCs.

At the same time, it was pointed out that it can take a long time before something is known for sure and countries were advised against introducing travel restrictions.

However, that call was not heeded by the EU, which on Friday night agreed to urgently stop all flights from South Africa.

At the same time, all member states were urged to "test and quarantine all incoming passengers".

Sweden has no direct flights from South Africa and is therefore not directly affected by the travel restriction.

However, the Swedish Public Health Agency has decided on new recommendations for people who have recently stayed in southern Africa.

All travelers who have stayed in South Africa, Lesotho, Botswana, Zimbabwe, Mozambique, Namibia or Eswatini (Swaziland) at any time during the last seven days before arriving in Sweden are encouraged to test for covid-19 as soon as possible after entry, preferably the same day, and to take a new test after five days. ”

The recommendation applies to both vaccinated and unvaccinated people and you are also asked to stay at home for seven days after arrival in Sweden, regardless of whether you have symptoms or not.

Hear SVT's Africa correspondent Johan Ripås about how the news about the new virus variant was received in South Africa.