Johnson to Macron: France takes back all illegal migrants 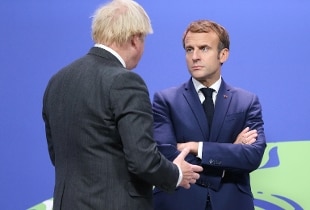 November 26, 2021 British Prime Minister Boris Johnson has proposed to France to take back all migrants who have crossed the English Channel to discourage departures.

It is one of five points made by the Downing Street chief in a letter to French President Emmanuel Macron, in light of the death of 27 migrants in a shipwreck off Calais.

In a series of Twitter posts, Johnson explained his strategy to counter the flow of migrants attempting to cross the English Channel to the UK, a source of tension with France.

In a letter to Macron, the Downing Street boss proposed to "work immediately on a bilateral return agreement with France" and with "the EU". Such an agreement with Paris "would have an immediate and significant impact," argued Johnson: "If those who reach this country were quickly repatriated, the incentive for people to put their lives in the hands of traffickers would be greatly reduced."

Emphasizing the "urgency of the situation", the British Prime Minister referred to the proposal for "joint patrols to prevent other boats from leaving French beaches", "aerial surveillance", "more advanced technologies, such as sensors and radar" but also «a better sharing of intelligence in real time».

My letter to President Macron.