Covid-19, in Belgium the first case of South African variant confirmed in Europe

The United Kingdom and Israel - where the first case outside the African continent was registered - have announced the closure of the borders to 6 African countries. Italy stops flights, Europe monitors the situation. For scientists, variant b.1.1.529 has at least 10 mutations, compared to two in the Delta and three in the Beta. Pfizer is studying the new variant 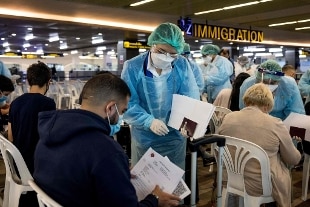 The first case of the South African variant of Covid-19 has been confirmed in Europe, to be precise in Belgium. Health Minister Frank Vandenbroucke has made it known that a person, not vaccinated and found positive for Covid-19 last November 22, has contracted the variant B.1.1.529. The person in question has traveled abroad. The new variant is of great concern, but the World Health Organization estimates that it will take a few more weeks to understand the level of transmissibility and virulence. WHO experts, responsible for monitoring the developments of the Covid virus, are already meeting today to determine whether the variant should be classified as "worrying" or "to be monitored".

Experts have described the

, known as B.1.1.529, "one of the worst seen so far" so dangerous that it could 'pierce' the immunity of vaccines. There are currently no confirmed cases in Great Britain, while

59 positives have been identified in South Africa, Hong Kong and Botswana

Pfizer is studying the new variant of Covid-19

, which is feared could evade the vaccine, and expects to have the first results "within two weeks at the latest". This was announced by a spokesperson for the pharmaceutical group.

new variant of the coronavirus

it is the most significant discovery so far by scientists, "a senior UK health official told BBC. Scientists fear that the variant - known as b.1.1.529 - may be more transmissible and more capable of evading vaccines." This is the most significant variant we have encountered to date and urgent research is underway to learn more about its transmissibility, severity and susceptibility to vaccines, "said Jenny Harries, chief executive of the UK's health safety agency. (Ukhsa) Scientists are examining "what public health actions can limit the impact of b.1.1.529."

new variant of Covid-19 has a large number of mutations

, attributing to this an exponential surge in infections, a tenfold increase in cases since the beginning of the month. Israel immediately aligned itself by imposing a stop to flights, then Germany, where German companies will be obliged to bring only Germans to the country, and now Australia and Italy have also announced the stop to flights from Southern Africa. Europe is moving in this direction and new nations are added to the list: Malta, Holland and France. Japan also introduces restrictions for passengers from southern Africa.

The words of the

: "I signed a new ordinance banning entry into Italy to anyone who has been in South Africa, Lesotho, Botswana, Zimbabwe, Mozambique, Namibia, Eswatini in the last 14 days.

I signed a new ordinance banning entry to Italy for anyone who has been in South Africa, Lesotho, Botswana, Zimbabwe, Mozambique, Namibia, Eswatini in the last 14 days.

Our scientists are hard at work studying variant B.1.1.529.

In the meantime, maximum precaution.

"It thundered so much that it rained. Just yesterday I said that

and so it was" is the comment to the AGI by the infectious disease specialist Massimo Galli in relation to the new variant B. 1.1.529 discovered in South Africa.

"Unfortunately we have detected a new variant which is cause for concern," said the virologist of the Center for Epidemic Response & innovation (Ceri) Tulio De Oliveira at an urgently called press conference. The variant, scientifically named b.1.1.529, "has a very high number of mutations", said the scientist, expressing the hope that the World Health Organization will give it the name of a letter of the Greek alphabet, as already happened for the previous ones. The

variant was also detected in Botswana and Hong Kong

among some travelers from South Africa, he added.

Busy day on B.1.1.529 - a variant of great concern - The world should provide support to South Africa and Africa and not discriminate or isolate it!

By protecting and supporting it, we will protect the world!

A plea for billionaires and financial institutions.

"Today there are less than 100 complete sequences, we will decide whether to classify B11529 of interest or concern. We don't know much about it yet.

and the concern, when you have so many mutations, is that this may have an impact on how the virus behaves. Now researchers are teaming up to understand where these mutations are and what they could potentially mean for our diagnostic tools, treatments and vaccines. It is good that these variants are being discovered. . It means we have a system in place. It will take a few weeks for us to understand what impact this variant has. " This was explained by the

, an expert from the World Health Organization (WHO), taking stock of what is known about the new mutant at the moment.

"There is a lot of work going on", assured the expert, explaining that it is "a variant under monitoring" and that the Technical Advisory Group on Sars-CoV-2 Virus Evolution (Tag-Ve) he is discussing "whether to make it a variant of interest or concern. And if this were the case - added van Kerkhove - we will give it a name with a letter of the Greek alphabet".

Everyone "must understand that the more this virus circulates, the more opportunities it has to change"

, is the expert's warning. "Everyone has a role to play in bringing transmission down to a level that protects themselves against serious illness and death. So get vaccinated when you can, make sure you have completed your cycle and taken all the necessary steps to get it right. reduce your exposure "to the contagion" and to prevent the risk of passing the virus to

The exponential numbers of infections are confirmed by South African Health Minister Joe Phaahla, who expressed "serious concern" about the variant, labeling it as potentially "a serious threat". Last Wednesday,

infections in the country reached 1,200 in 24 hours

, compared to 106 at the beginning of the month. An alarming figure, although the authorities had foreseen a possible fourth wave starting from mid-December due to the movements in view of the Christmas holidays.

22 positive cases of variant b.1.1.529 have been detected in the country following genomic sequencing

. The Nicd also said that the number of detected cases and the positivity index are "rapidly increasing" in three of the country's provinces, including Gauteng, where the economic capital Johannesburg and the administrative capital of the Pretoria are located. A cluster outbreak was recently identified, concentrated in a higher education institution in pretoria, the institute added.

Last year, also in South Africa, the beta variant of the virus emerged, soon supplanted for transmissibility by the Delta, originally detected in India. According to the scientists, the new variant b.1.1.529 has at least 10 mutations, compared to two in the Delta and three in the Beta.

The first case of the new South African variant of Covid-19 was recorded in Israel. As the Jerusalem Post reports, it was a man who had returned home from Malawi who was infected. There are two other cases under observation, which could be traced back to the new variant B.1.1.529: they were genetically sequenced and now the health authorities are awaiting the results.

Coronavirus vaccines will "almost certainly" be less effective against the new variant from South Africa. This is the alarm that comes from the biologist James Naismith, director of the Rosalind Franklin Institute of the University of Oxford, saying that "it is bad news, but it is not the day of judgment".According to Naismith, mutations in the variant suggest it could

spread faster. And therefore "he will inevitably reach the United Kingdom", but "the travel ban will delay his arrival by perhaps a few weeks".

And now fears about the effects of the new Covid 19 variant are sinking Asian markets and causing oil prices to slide while stable assets rise.

Investors fear that the new variant, which may be more contagious than the Delta and more vaccine resistant, could deal a severe blow to the global recovery.

Markets down at the start of the last session of the week.