The climate crisis is making the albatross "different" more

Stress over the climate, hard work for bread and long business trips. Do you recognize yourself? This has become commonplace for some of the animal kingdom's most monogamous species - the albatross. Which has led to more and more albatrosses separating. 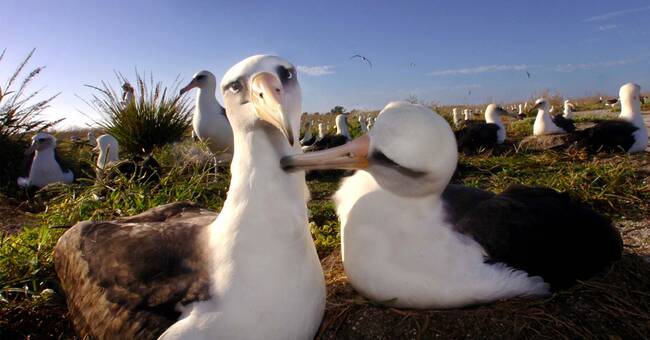 The albatross is known for sticking to a partner for life, but now researchers in a study from The Royal Society have discovered a change - the albatross is increasingly separating.

The researchers believe that warmer sea temperatures and global warming have led to the birds having to fly further out to sea to find food.

Usually only 1-3 percent of the black-breasted albatross separate after choosing a partner to reproduce with.

But in recent years, as water temperatures have risen, albatross separations have also increased to about eight percent.

The study was conducted in the Falkland Islands, where a population of 15,500 breeding pairs of black-brown albatrosses has been studied for 15 years.

Seabirds depend on food from the sea.

When the oceans heat up, it means fewer fish, less food and a harsher climate of life.

This leads to increased stress hormones in the birds and they are forced further out to sea to find food.

Have an exciting love life

Researchers have long studied the love life of albatrosses, precisely because of their monogamous lifestyle.

They live for 50-60 years, they choose a partner and seduce him through dance and they welcome each other loudly when they have been out on long flights.

- There are many things that we think are superduper-human here, says Dr Graeme Elliot to The Guardian.

He is a scientific advisor at the New Zealand Department of Conservation and has been studying the albatross for 30 years.

And perhaps we can now relate even more to this bird when it turns out that stress from the climate crisis, long work shifts to get food and longer journeys from home mean that more albatrosses are struggling to keep their relationships alive.

The black-breasted albatross has decreased in number in recent years, it is also believed to be due to climate change, and is now closely threatened according to the International Union for Conservation of Nature (IUCN).