EMA: Five-year-olds should be offered vaccines

All indications are that the age limit for when children should be offered a vaccine against covid-19 will be lowered shortly. EMA wants children as young as 5-year-olds to be offered vaccines, also in Sweden. 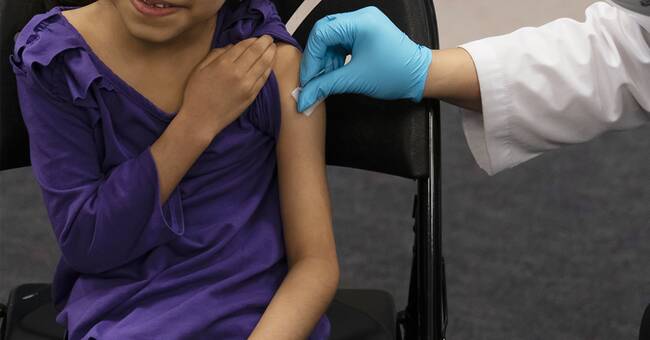 The European Medicines Agency (EMA) is now recommending that children over the age of five be offered coronavina vaccine.

The twelve-year limit that has applied so far must therefore be lowered in order, if possible, to curb the rampant spread of infection in Europe.

The vaccine that becomes relevant is Pfizer-Biontech's mRNA vaccine Cominarty.

According to the recommendation, the first injection, which is given intermuscularly in the upper arm, should be followed by a second dose after no earlier than three weeks.

However, the dose given to young children will be significantly smaller.

According to a study, one third of the adult dose of 30 .g (micrograms) is enough to achieve the same protective effect with the vaccine.

EMA is leaning towards a recent study.

This compared with 16 of the 663 children (2.4 percent) in the control group who received placebo.

The side effects in children are said to be the same as in adults: soreness in the muscle where the vaccine was injected, fatigue, headaches and redness and swelling of the skin where the needle was inserted.

According to the EMA, the benefits of vaccinating young children far outweigh the risks, but the effects will be studied carefully.

The CHMP, the EMA's Committee on Medicinal Products for Human Use, has now forwarded recommendations to the European Commission, which will make the final decision on whether or not to start vaccinating children aged 5-11.

The reason is that close to 60 per cent of the confirmed cases of infection have recently been in that age group.