The evolution of the situation will bring polar air over the entire peninsula, starting from the weekend the first frosts. First snowfalls even at medium altitudes 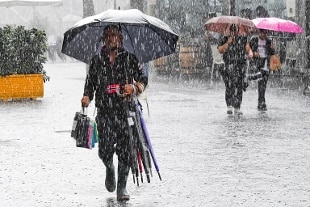 November 25, 2021 The polar frost arrives. The evolution of an intense perturbation driven by a vortex centered on the Balearic Islands that is sweeping Italy will bring it and will culminate in an irruption of polar air over the weekend.

Heavy or very abundant rains will mainly hit Tuscany, Lazio, Sicily, Calabria and Puglia, but it will also rain on the rest of the regions. From tomorrow, Friday, gradually colder air will begin to flow in at high altitude, starting from the Tyrrhenian regions from Tuscany to Campania also with storms in Rome and Naples. Snow will fall on the Alps above 800-1000 meters, from 1300 meters on the Apennines and in Sardinia.

During the weekend the cold air will become more and more incisive with heavy rains on the Tyrrhenian regions, continuous and persistent on Campania, while the snow will drop further in altitude. In the Alps it will descend to the valley, while in the Apennines and in Sardinia even in the hills (800 meters). Temperatures will begin to drop first in the North, then at the weekend also in the rest of the regions with values ​​well below the average for the period.

Calabria: red alert in some areas

The wave of bad weather that affects Calabria continues. For tomorrow, Friday 26 November, the Civil Protection has issued a new weather alert bulletin which mainly concerns the Tyrrhenian coast of Cosenza indicated with a red code. Orange alert, on the other hand, for the Tyrrhenian coast of Catanzaro and Vibonese, while a yellow alert is expected on the rest of the region. In the evening of today the first effect of the bad weather should occur which should affect the whole Calabrian ionic belt more.

Campania: yellow alert extended, it is orange on the Sorrento peninsula

The Civil Protection of the Campania Region has issued a new weather alert for rains and thunderstorms which extends and expands the one currently in force. Until 6 pm tomorrow, Friday 26 November, the alert will be orange on the Sorrento-Amalfi Coast, Monti di Sarno and Monti Picentini, where thunderstorms are also expected of strong intensity that could give rise to widespread hydrogeological instability even with instability. of the slope, landslides and rapid mudslides. The warning will be yellow on the rest of Campania, where scattered rainfall, showers and thunderstorms, even intense, associated with gusts of wind are expected.

The circulation of trains on the Naples-Poggiomarino line of the Circumvesuviana was interrupted between the stations of Scafati and Poggiomarino due to the flooding of the Scafati station.

"The Regional Functional Center announces that the Civil Protection Department today issued the warning of adverse weather conditions indicating that widespread rainfall is expected in Lazio up to Saturday, including rain or thunderstorms, especially on coastal areas". "The phenomena will be accompanied by showers of strong intensity, frequent electrical activity and local gusts of wind. The Permanent Operations Room of the Lazio Region has issued the alert of the Regional Civil Protection System and invited all structures to adopt all the relevant obligations ".

Liguria: snow in the hinterland

Snowfalls have affected and continue to affect the alpine areas of Liguria, in particular the Po Valley slopes of Ponente and Levante and the Val d'Aveto. The snow gauges of the Omirl network report, at 11.30, 26 cm on Monte Settepani (Osiglia, Savona, at over 1300 meters above sea level). Accumulations of a few centimeters are reported in the Aveto valley above 1100 meters, while there is sleet in the Scrivia valley. A drop in temperatures expected over the weekend should be noted.

In the last few hours, snowfalls have been affecting the Val Bormida and Valle Stura in particular, but there are currently no problems with traffic. Fiocchi also signposted on the A6 Savona-Turin, after Millesimo heading north.

. In the north: bad weather in Friuli Venezia Giulia, snow in the Triveneto Alps at 900m, more sun elsewhere. Center: intense bad weather in western Sardinia, Tuscany and Lazio, rain in Umbria and Marche. In the south: storms in Campania and northern Calabria, especially Tyrrhenian.

. In the north: snow on the Triveneto Alps at 700m, in the evening it gets worse in Lombardy. Center: bad weather in western Sardinia, Tuscany and Lazio, rain in Umbria. Snow in the hills. In the south: storms in Campania and in the Tyrrhenian coast.

. Improves in the North, bad weather on the Tyrrhenian and in Sardinia with snow at 800 meters.

Extreme events have almost quintupled in just one month from north to south of the Peninsula with a dramatic chain of storms, tornadoes, hailstorms and gusts of wind that cause the damage to agriculture to rise to over 2 billion in 2021 due to violence climate. This is what emerges from the analysis of Coldiretti on ESWD data relating to the month of November compared to the same period last year in reference to the wave of bad weather that is affecting Italy with the alert of the Civil Protection on Lazio, Campania and Sicily, thunderstorms also on Tuscany, Sicily, Calabria and Puglia and the arrival of frost and snow.

A situation that weighs down the budget of a year in which dramatic extreme events occurred in the cities and countryside that caused victims and damage along the Peninsula.