Carlsen and Nepomniachi .. Dubai and "Expo" write a new history of the "smart" game

The Norwegian World Chess Champion, Magnus Carlsen, agreed with his challenger to the Russian World Champion Ian Alexandrovich Nepomniacchi, that the holding of the World Chess Championship at “Expo 2020 Dubai”, and the hosting of “Dana Al Dunya” for the global event motivated them to win the title and write a new history for the game “Al-Az”. 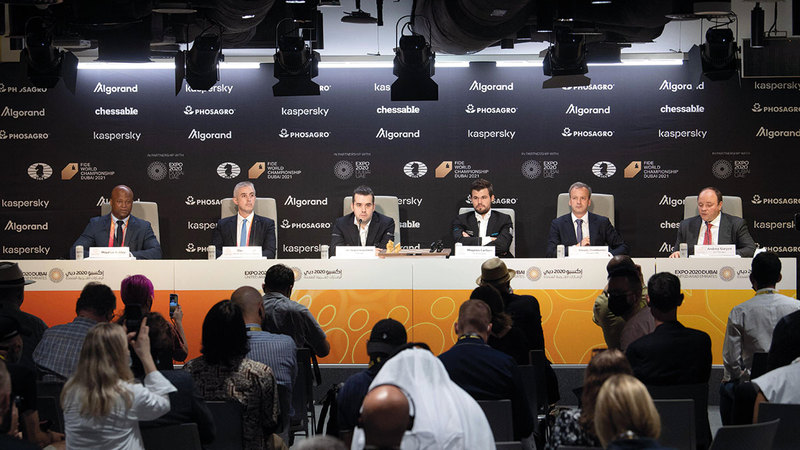 They affirmed that Dubai is “the most beautiful city in the world.”

Carlsen and Nepomniachi .. Dubai and "Expo" write a new history of the "smart" game

The Norwegian world chess champion, Magnus Carlsen, agreed with his challenger to the title of the Russian world champion, Ian Alexandrovich Nepomniacchi, that the holding of the World Chess Championship at “Expo 2020 Dubai” and the hosting of “Dana Al Dunya” for the global event motivated them to win the title and write a new history for the “smart” game. They stressed that Dubai is the most beautiful city in the world, and that the establishment of the World Chess Championship in it is an unforgettable event, and they congratulate the UAE on the country's celebrations of the 50th anniversary of the Federation.

Yesterday, the Organizing Committee of the World Chess Championship announced, in a press conference, the details of the global event in the presence of the two champions, while the World Schools Chess Championship kicks off in the Spain pavilion, with the participation of 108 players from 10 countries representing 12 teams in the tournament, who qualified from the final qualifiers for the event.

For his part, Magnus Carlsen confirmed that he is fully confident in his ability to preserve the world title, and said: “There is no doubt that facing Ian Nepomniacci will be very difficult, especially since he has a distinctive way of playing and is characterized by speed and his ability to keep (the king) securely in the majority times".

He added: “Running in Dubai, and at the same time in the global event (Expo 2020) motivates me to focus more on preserving the title, while I congratulate the UAE on its celebration of 50 years of the federation, as Dubai has a special place for me, I am very happy to be here again.”

For his part, Ian Nepomniacci said that he "has a great friendship with Magnus Carlsen", but stressed that "this friendship will have no place when the World Chess Championship matches begin."

He added, "This challenge is certainly one of the most important stations in my chess career, and I have a great friendship with Carlsen, but this friendship will stop when we start playing matches and competing for the world title."

He continued, "I prepared for the tournament, and went through a very long way to reach this decisive stage, and I hope that I will be successful in winning the title."

The committee revealed that facing the challenge for the title of world champion between the Norwegian Magnus Carlsen, the holder of the title since 2013 until now, and the Russian Ian Nepomniacci, will start tomorrow (Friday) at “Expo 2020” to reach the title and win the award.

She indicated that the two champions will play 14 games in the traditional, classic chess system to obtain the championship title, provided that one of them achieves 7.5 points. In the event of a tie, a play-off will be resorted to after the toss is taken, and the white player will get five minutes and the black player will get four minutes, and in the event of a tie, the black player wins.

Nepomniachi is one of the best chess players in the world

Russian Ian Alexandrovich Nepomniacchi (31 years old) is one of the most prominent chess players in the world, and his record is full of many titles and crowns, but he is still searching for the World Cup title, which is one of his biggest dreams, when he meets Norwegian Magnus Carlsen in the World Chess World Cup final at “Expo 2020”. Nepomniachi won the Russian Chess Championship and the European Singles Championship.

The Norwegian world chess champion, Magnus Carlsen, defends his title against the Russian champion Ian Alexandrovich Nepomniacchi, at “Expo 2020 Dubai”, this month, as Magnus Carlsen began his career in the world of “the smart game” strongly, when he received the title of a great international professor, after his participation In the Dubai International Championship 2004, he is one of the most prominent international players, who constantly participate in chess tournaments held in the Emirates.

Chess genius Carlsen, is currently the world chess champion, as well as the world champion in fast chess and blitz chess. Carlsen reached the top of the world rankings of the International Chess Federation for the first time in 2010, only preceded by Russia's Garry Kasparov in his time as the highest ranked player in the world.