Bad weather. From tomorrow the thunderstorms return, but also the snow up to over 600 meters. Temperatures down

On Friday a cyclonic vortex active on nearby Spain will hit the Tyrrhenian regions with particular force, especially Lazio and Campania&nbsp; 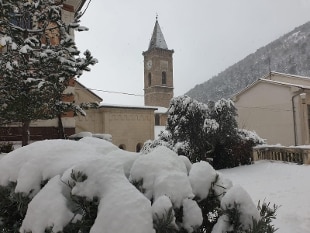 November 24, 2021 In the next few days, "the descent of polar air from Northern Europe will trigger a cyclonic circulation in the Mediterranean basin, heralding increasingly colder bad weather". This was announced by experts according to which from the late afternoon of today the signs of an intense Atlantic disturbance will begin to appear on Sardinia with gradually more widespread showers and which will extend in the night to Tuscany, Lazio, Salento and Liguria. Tomorrow the disturbed front will unleash all its violence on most of Italy with widespread rain: storms with hydrogeological risk are expected on Lazio, Sicily, Calabria and Puglia.

The cold air at high altitude will cause snowfall in the Alps up to over 600 meters in western Piedmont and around 1000-1300 meters in the rest of the Alps. But that's not all. On Friday, an active cyclonic vortex on nearby Spain will send other intense disturbed bodies that will hit the Tyrrhenian regions with particular force, especially Lazio and Campania where storms will hit and there will be intense storm surges along the coasts.

Bad weather will also affect Sardinia and the Alpine arc where the snow will drop to above 800 meters. The first real winter lunge is expected over the weekend;

gradually colder air will enter Italy, it will continue to rain heavily on the Tyrrhenian regions, insistently on Campania, but you will have to pay attention to the snow.

The flakes will fall copiously on the Alpine reliefs at altitudes close to 6-800 meters and also on the Apennines and in Sardinia the snow will fall widespread above 800 meters.

Temperatures in general decrease in all regions with values ​​that in the North will drop below the average even by 10 degrees.