The most priority foreign market for the Orion reconnaissance and strike UAV will be the Middle East. This was stated by the General Director of JSC "Kronshtadt" Sergei Bogatikov. According to him, the countries of the region have expressed a desire to participate in cooperation in the production of domestic drones. Earlier, at the Dubai Airshow 2021 exhibition, Moscow presented a number of large-size UAVs: Orion, Sirius, Helios-RLD and Thunder. The drone control complex was also demonstrated. The Russian authorities expect that Russia will be able to occupy up to 10% of the global drone market. According to experts, the advantages of domestic devices lie in high efficiency, reasonable price, as well as Moscow's willingness to share technologies. 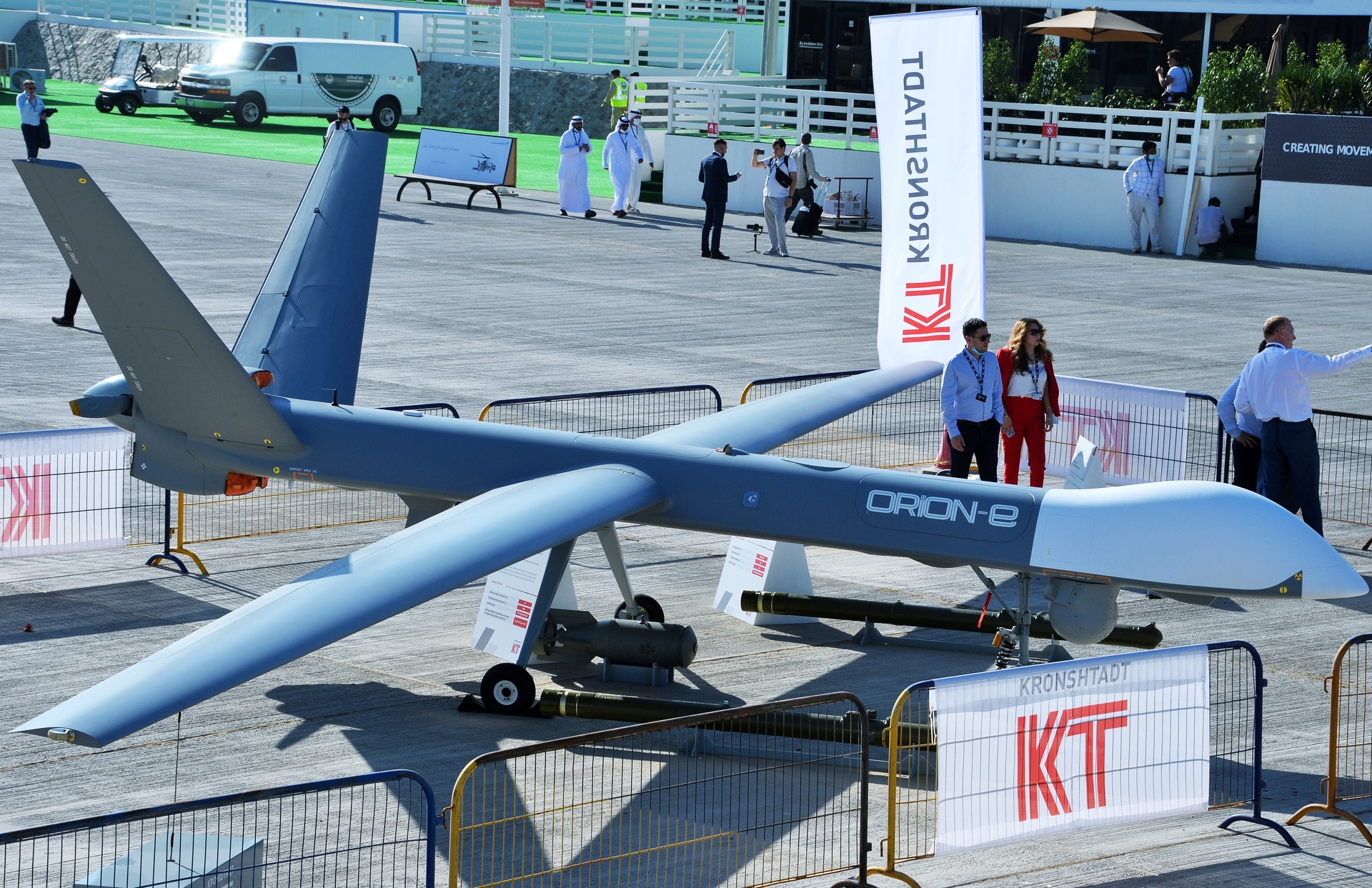 General Director of JSC "Kronshtadt" Sergei Bogatikov said that the most priority foreign market for the complex with unmanned aerial vehicles (UAV) "Orion" will be the Middle East.

His statement is quoted by the press service of the enterprise.

“It can be stated that the most promising market for the Orion-E spacecraft is the Middle East.

In mid-November, Orion was presented at the 17th international aerospace exhibition Dubai Airshow 2021. Within its framework, presentations for new potential customers and negotiations with partners of Rosoboronexport took place.

As a result, representatives of Middle Eastern enterprises expressed a desire to participate in cooperation in the manufacture of Russian UAVs.

“The most interesting products of the company are representatives of the Persian Gulf countries, a number of countries in Africa and Southeast Asia.

In addition, representatives of the industry of the Middle East countries have expressed a desire to participate in cooperation in the production of unmanned aerial vehicles developed by JSC "Kronshtadt", - said in a press release of the company.

Along with Orion, Kronstadt specialists demonstrated to the foreign public an automated workstation (AWS) for controlling a new generation of drones.

The company calls this product “the next step in the autonomy of Russian drones” and one of the “key areas for further modernization” of Orion.

“If for remotely controlled UAVs two operators are needed, for automatically controlled ones - one, then for semi-autonomous drones one can expect that one operator will be able to control a group,” Bogatikov explained.

Earlier, the device received a successful baptism of fire in Syria, carrying out reconnaissance and destroying jihadist facilities.

To increase the volume of production of this UAV and other large-sized domestic drones, a new plant is being built in Dubna near Moscow.

Its launch is scheduled for the end of this year.

The brainchild of "Kronstadt" can be in the air for more than a day.

With high accuracy, the device is capable of using corrected bombs and laser-guided missiles.

Thanks to modern on-board equipment, strikes can be delivered in various weather conditions and at night.

Also, "Orion" has no restrictions on its use in different natural and climatic conditions.

The UAV can use a satellite communication system.

It allows you to significantly increase the effective controllable range of the drone.

Without receiving signals from orbiters, the Orion's control range is limited to 250-300 km.

In an October interview with RT, Sergei Bogatikov said that in the future, Orion will be able to operate as part of a group of different types of UAVs.

To this end, the company is improving ground control points and conducting appropriate experiments.

“For example, we checked the interaction with the Orlan-10 and ZALA vehicles.

As a result, the task of joint actions of a mixed group of different types of UAVs in conditions close to a real battlefield saturated with electronic and fire countermeasures was successfully modeled and worked out, "Bogatikov said.

Now on the basis of "Orion" a more dimensional and powerful UAV "Sirius" is being created.

The takeoff weight of the drone should be 5 tons, the range - 10 thousand km, the time of combat duty in the air at maximum load - up to 40 hours.

Sirius will have a satellite control option and will be able to interact with manned aircraft.

Also, the drone will become the carrier of the unified communication, data exchange, navigation and identification system (OSNOD).

Its equipment is designed for encoding and decoding information, transmitting large amounts of data and positioning an aircraft in the absence or suppression of GLONASS signals.

The OSNOD developer is the Scientific and Technical Center of NPP Polyot (Nizhny Novgorod).

As stated in the materials of the enterprise, the system is an important element of onboard radio-electronic equipment.

At the same time, it has a high level of noise immunity.

Now OSNOD is being installed on the fifth generation Su-57 fighters.

Experts believe that in the future, the crew of this aircraft will operate the Sirius and other drones.

The assembly of the first sample of "Sirius" is currently underway.

Its debut flight is expected in 2022.

Sirius was presented at Dubai Airshow 2021. Along with it, at the exhibition in the UAE, Rosoboronexport demonstrated two more heavy large-sized unmanned systems: Helios-RLD and Thunder.

Unlike Helios-RLD, the Thunder apparatus will have a purely military purpose.

The drone will become a carrier of traditional missile and bomb weapons and will be able to use the Molniya drones in reconnaissance and strike versions.

“Lightning has a constant data exchange between the UAVs.

It is possible to change tasks for each member of the pack.

At the same time, thanks to artificial intelligence, the task is carried out by a group without constant communication with the carrier aircraft, "the Kronstadt representative explained earlier.

Like Sirius, the Thunder complex will receive equipment for interacting with manned aircraft, including the Su-57.

The drone is being developed on the basis of the scientific and technological groundwork that emerged as part of the Orion project.

In early November, at a meeting with the leadership of the Ministry of Defense and enterprises of the military-industrial complex, Russian President Vladimir Putin drew attention to the importance of developing domestic unmanned aircraft.

“We need to continue working on them (drones. -

), work as hard as it has been recently, having in mind, among other things, the use of artificial intelligence, the most modern achievements of technology, science and, of course, keeping in mind the experience that we ourselves have when using these aircraft, the analysis of what we observe around us, "Putin said.

In addition, Moscow has big plans for the export of Russian UAVs.

So, at the end of September, on the air of the Zvezda TV channel, the director of the Federal Service for Military-Technical Cooperation (FSMTC) Dmitry Shugaev spoke about the readiness of the Russian Federation to occupy at least 10% of the global UAV market in the medium term.

In an interview with RT, Honored Pilot of Russia, Major General Vladimir Popov, noted that quite tough competition has been established on the international market for unmanned aircraft.

The expert sees the advantages of domestic products in a reasonable ratio of price and quality, as well as in Moscow's willingness to share technologies.

“The market for unmanned aircraft is on the rise.

Many countries, including those in the Middle East, have a growing need to increase the number and expand the range of devices used, to improve the methods of controlling them, ”said Popov.

In his opinion, Moscow is demonstrating its readiness to supply its partners in the area of ​​military-technical cooperation with unmanned products that are in demand in the modern theater of military operations.

Moreover, Russia is one of the few countries in the world that can share competencies in the field of interaction between UAVs and manned aircraft.

In a commentary on RT, Dmitry Litovkin, editor of the Nezavisimoye Voennoye Obozreniye newspaper, said that Russia has a real opportunity to become one of the leading suppliers of drones in the world market.

“A number of countries in the Middle East, for political and other reasons, do not want to buy drones from Israel, the United States and Turkey.

Russia seems to be the most suitable partner for such states.