According to the Johns Hopkins University tally, 387,000 new infections and 4,401 deaths have been recorded in the world since yesterday 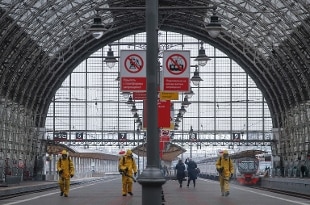 The countries reporting the highest number of

In Russia during the last day, 35,681 new cases of Covid-19 and 1,241 deaths caused by the disease were recorded: the Tass reports, citing data from the national anti-coronavirus operations center. According to the state news agency, the number of new cases in one day is the lowest recorded in the country since last 24 October.

On the previous day, according to data published yesterday morning, 36,970 new cases of Covid-19 and 1,252 deaths caused by the disease had been detected in Russia. On both November 19 and November 20, the coronavirus operations center recorded 1,254 deaths caused by the disease in the previous 24 hours: the highest number recorded in one day in the country since the beginning of the epidemic. According to official data, 9,366,839 cases of Covid-19 have been detected in Russia since the beginning of the epidemic. About 146 million people live in the country.

In Ukraine in the last 24 hours, 7,464 new cases of Covid-19 and 326 deaths caused by the disease have been recorded: the Ukrainian Ministry of Health reports, taken up by the Ukrinform agency. According to official data, 3,340,407 cases of Covid-19 have been detected in the country since the beginning of the epidemic and 81,598 people have died from the disease. About 42 million people live in Ukraine.

Acknowledging the impossibility of pursuing a "zero Covid" policy, New Zealand will end the three-and-a-half-month lockdown in the country's largest city, Auckland, by adopting a new strategy to combat the coronavirus. The news was made known by Prime Minister Jacinda Ardern who explained that starting from 11:59 pm on 2 December, New Zealand will be less severe in its attempt to contain the Delta variant, renouncing the claim to eliminate it entirely.

"The hard truth - said Arden - is that the Delta variant is here and will not go away. Even if no country has been able to eliminate it completely, New Zealand is still in a better position than most other nations to deal with it. ". So far the Arden-led government has aimed at the complete eradication of the disease, but the goal has in fact proved unrealistic and extremely penalizing for the quality of life (and for the economy) of the population. After all, the disease has killed only 40 people out of a population of five million, and public pressure has increased to end the blockade imposed on Auckland since the Delta variant was detected in this city in August.

In Germany, 30,643 cases of coronavirus and 62 deaths from complications have been confirmed in the last 24 hours. This was announced by the Robert Koch Institute (Rki), the agency commissioned by the Berlin government to monitor the progress of the pandemic in the country. This is 7,036 cases of Covid-19 more than last Sunday, when 23,607 new infections were reported. The incidence per 100,000 inhabitants at seven days rose to a record 386.5 from 372.7 the previous day, explains the Rki. Since the beginning of the pandemic, 5,385,585 infections have been confirmed by Rki, while 99,124 people have died from complications.

The anti-Covid riots that have rocked the Netherlands since Friday were acts of "pure violence" by "idiots," Dutch Prime Minister Mark Rutte told reporters today. "What we have seen this weekend is pure violence," Rutte said, adding that "he will never accept that idiots" are violent towards the police "on the pretext that they are unhappy" due to health restrictions.

The ministry of health in its most recent bulletin updated yesterday reported 143 new cases of coronavirus across the country and no deaths caused by the virus, while the number of hospitalized patients in serious condition remained unchanged at 62 from the previous day.

In Tokyo, the metropolitan government confirmed 20 new infections, with a weekly average down by 29.7%.

Of the country's 47 prefectures, Hokkaido again reported the largest number of new cases (25), followed by Tokyo, Kanagawa and Osaka (18).