Egypt returns to the Gaza Strip through the reconstruction gate

A huge picture of Egyptian President Abdel Fattah al-Sisi rises in a street in Gaza, embodying Cairo's determination to restore its political role in the besieged Palestinian sector, from the gate of reconstruction after the recent war between Israel and the Islamic Resistance Movement "Hamas". Weeks after the end of the war, in 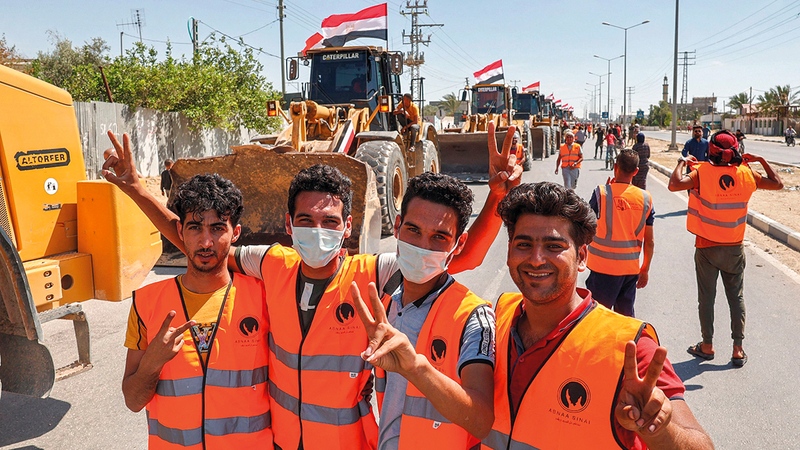 Egypt returns to the Gaza Strip through the reconstruction gate

A huge picture of Egyptian President Abdel Fattah El-Sisi rises in a street in Gaza, embodying Cairo's determination to restore its political role in the besieged Palestinian sector, from the gate of reconstruction after the recent war between Israel and the Islamic Resistance Movement "Hamas".

Weeks after the end of the war, last May, Cairo sent Egyptian workers and technicians to the Palestinian enclave, to construct a main street on the sea coast west of Gaza City, and two residential neighborhoods in the northern and central Gaza Strip.

A 30-year-old Egyptian worker participating in the workshop, preferring not to be named, said that he came to Gaza with about 70 engineers, workers and truck drivers, adding: "I am happy to help our brothers in Palestine. The president's instructions are to rebuild the Gaza Strip."

A 26-year-old truck driver says: "The first project we complete is the Corniche Street," noting that "the Egyptian grant also includes the construction of two residential cities, the first in Beit Hanoun (north), and the other in Madinat al-Zahra" near the seashore.

During the war, Cairo played a major role in mediating between Israel and Hamas to reach a ceasefire, and announced support for Gaza reconstruction projects with a $500 million grant.

The 11-day confrontations resulted in the killing of 260 Palestinians, including 66 children and a number of fighters, and 13 people on the Israeli side, including a child, a girl and a soldier, according to sources on both sides. About 1,500 homes were completely destroyed, and about 60,000 Palestinian homes were partially destroyed in the Strip.

The economic expert, Omar Shaaban, says that the Egyptian president's political vision depends on investing millions of dollars on the land of the Gaza Strip, explaining that "watching Egyptian workers in Gaza was unexpected and unimaginable."

He notes that "Egypt and (Hamas) are not friends, but they have common interests," adding that "Cairo wants to continue supervising the ceasefire agreement by engaging in reconstruction."

In order to rebuild the infrastructure in the Strip, Hamas needs foreign aid, which requires it to maintain good relations with the Egyptian state, with which it has borders in the south.

The Rafah crossing with Egypt is the only outlet for the Strip to the outside world, and it is not controlled by Israel.

At the same time, Shaaban believes that Egypt "realizes that it does not have many options in Gaza, as (Hamas) is still ruling the Strip after four wars with Israel and about 15 years of siege."

Israel tightened its land, sea and air blockade on the Strip, a narrow coastal strip densely populated with nearly half of whom live below the poverty line, after Hamas took control of it in the summer of 2007.

Since the rise of the Hamas movement to power, the State of Qatar has emerged as the largest donor to the Strip, but after the end of the last war, the distribution of humanitarian financial aid provided by Qatar was halted for three months, due to discussions about the mechanism for entering the funds into the Strip.

Last month, Qatar succeeded in disbursing $10 million to about 100,000 poor families in the Gaza Strip, after Israel approved a new distribution mechanism under the supervision of the United Nations.

Prior to the last military confrontation, in May, the transfer of Qatari funds to Gaza took place in cash through the Beit Hanoun (Erez) crossing.

However, a dispute still exists with Israel over the payment of the salaries of Hamas government employees, as Israel opposes paying in cash for fear of the money reaching the armed Palestinian factions.

Recently, Israeli Foreign Minister Yair Lapid urged Arab countries that have official relations with Israel to engage in the process of rebuilding and developing the Gaza Strip.

All help is welcome

The Hamas government estimates the direct losses of the recent Israeli war at about $479 million, in addition to about $600 million in losses from the past wars, according to the Undersecretary of the Ministry of Housing and Public Works in Gaza, Naji Sarhan.

These estimates exclude the costs of solving the electricity and water crisis and repairing infrastructure, according to Sarhan, who believes that "help from Qatar is welcome, as well as from Egypt, we are coordinating between countries."

The Egyptian support for the construction of the coastal street (the Corniche) comes as a continuation of a main road that aims to connect the northern and southern parts of the Gaza Strip, part of which Qatar has built on the coast of Gaza City.

The Egyptian-funded route requires the demolition of dozens of homes in the Shati refugee camp, west of Gaza City.

“They told us that we would have to leave the place, and that we would get a new house,” said Roya Al-Hassi, 83, sitting on a rocking chair in her house, which is on the list of demolition in the project implementation plan. “I have no objection to leaving, as long as I I find a bedroom, a bathroom and a kitchen.”

On the other side of the narrow road, businessman Maher al-Baqah is overseeing the construction of a large café on the beach. “The new Corniche will attract a lot of customers,” he says, but he adds with a smile: “But hey, it's Gaza, and we never know when it will be possible. That a new war breaks out.

• To rebuild the infrastructure in the Gaza Strip, the "Hamas" movement needs foreign aid, which requires it to maintain good relations with the Egyptian state, with which it has borders in the south.

• The Hamas government estimates the direct losses of the last Israeli war at about 479 million US dollars, in addition to about 600 million dollars in losses in the previous wars.

During the war, Cairo played a major role in mediating between Israel and "Hamas" to reach a cease-fire, and announced support for the reconstruction projects of the Gaza Strip with a grant of $500 million.