As the fighting rages on several fronts, Abi Ahmed announces he is heading to the battlefield to lead his forces against the Tigray Front

Ethiopian Prime Minister Abiy Ahmed confirmed that he will head to the battlefield to lead the National Defense Forces, at a time when military confrontations are raging between government forces and the Tigray Front militants along the border strip. 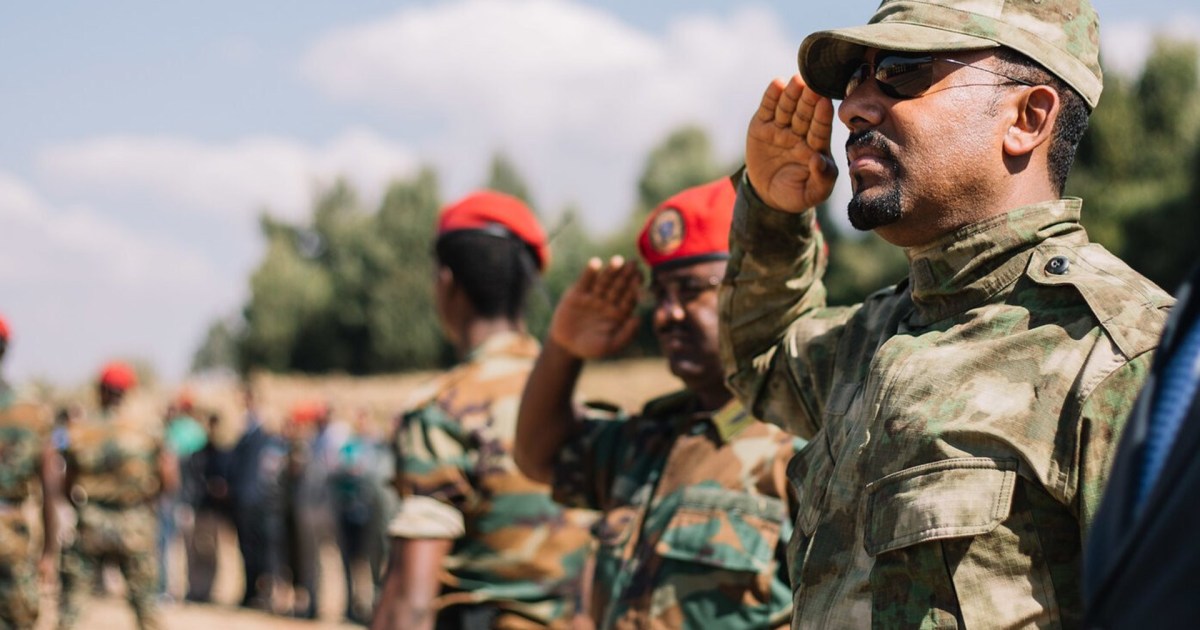 Ethiopian Prime Minister Abiy Ahmed confirmed that he will go to the battlefield to lead the National Defense Forces, at a time when military confrontations are raging between government forces and the Tigray Front militants along the border strip between the regions of Amhara, Tigray and Afar.

The Ethiopian Prime Minister said in a statement on Monday that the time for sacrifice has come, and that from tomorrow he will head to the battlefield to lead the National Defense Forces, adding that those he described as historical enemies do not want Ethiopia to grow.

He pointed out that what is happening is a conspiracy to subjugate and colonize Africans again, as he put it.

Meanwhile, Ethiopia's ruling Prosperity Party said that Addis Ababa faces historic and unprecedented challenges, and that the party leadership has taken steps to confront those threats.

The Executive Committee of the party, headed by Ethiopian Prime Minister Abiy Ahmed, said that the party's leadership will address the threats facing Ethiopia in the recent period.

Stressing that "the Ethiopians are working together to save their country."

And she added, in a statement Monday, that what she described as "internal groups and foreign forces" do not want Ethiopia's presence, and they constitute a serious threat to the security and safety of the country.

On the ground, fighting is escalating in the battles between government forces and the Tigray Front militants, for the fourth consecutive week.

Al-Jazeera correspondent reported that the battles are currently raging on 3 fronts, namely the Shwarobit Front and the Milli Front, in addition to the Bati Isaiita front, where the government announced that it was responding to a massive attack by the Tigray Front militants.

The importance of Bati Isaiita lies in the fact that it is a link between the regions of Amhara and Afar, where the vital road linking the port of Djibouti and the capital Addis Ababa, and the Tigray Front seeks to cut this road in order to strangle the capital.

Al-Jazeera correspondent had previously quoted sources as saying that the alliance of the Tigray People's Liberation Front and the Aung Shini group had taken control of the city of Chouarobet, which is about 230 km northeast of the capital, Addis Ababa.

The sources added that the fall of the city in the hands of the alliance of the Tigray Front and the Aung Shini group comes after 4 days of battles with government forces, and after the Tigray Front took control of the Atay and Sanbti regions.

The Tigray Front is trying to reach the Melle region, which lies on a main line linking Addis Ababa and Djibouti, and is a vital artery for transporting goods into the country.

On the other hand, Ethiopian TV said that the army, the Amhara regional forces and the special forces are confronting the Tigray People's Liberation Front in the currently active fighting positions, in the regions of Amhara, Oromia, Afar and Tigray.

Meanwhile, the US State Department renewed its call for American nationals to leave Ethiopia, and the Turkish embassy in Addis Ababa called on its citizens in Ethiopia to leave due to the intensification of battles.

On November 4, 2020, violent clashes erupted between the Ethiopian army and the Tigray People's Liberation Front, after government forces entered the region in response to an attack on an army base. Recently, the fighting between the two sides intensified.