EU concessions? The temporary relief of the refugee crisis at the White-Polish border is still too early to end

China News Service, November 21, reported that the escalating refugee crisis at the border between Belarus and Poland in recent weeks has temporarily eased. Refugees gathered in the main camp on the border between the two countries were transferred to a nearby refugee shelter. At the same time, hundreds of refugees trying to enter the European Union through Belarus boarded flights back to Iraq. 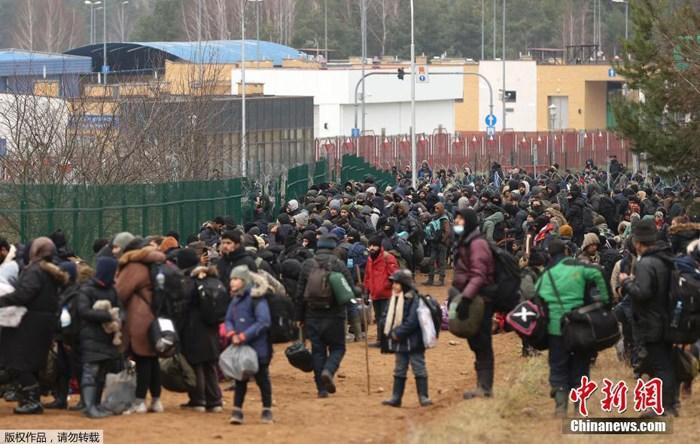 China News Service, November 21, reported that the escalating refugee crisis at the border between Belarus and Poland in recent weeks has temporarily eased.

Refugees gathered in the main camp on the border between the two countries were transferred to a nearby refugee shelter. At the same time, hundreds of refugees trying to enter the European Union through Belarus boarded flights back to Iraq.

Although the situation has eased, Polish officials said the border showdown is still too early to end.

On November 15, local time, a large number of refugees gathered in the area on the border between Belarus and Poland (on the white side).

According to reports, the Belarusian border guards stated on social media that as of November 18, all refugees trapped in the camp near the Bruzgi border crossing had been transferred to a nearby reception center; they received food and food at the center. Warm clothes.

The Polish side also confirmed that the camp has been emptied.

A few days ago, at this largest concentration of refugees on the border between Belarus and Poland, a large number of refugees clashed with Polish border guards.

The refugees used stones and other weapons to attack Polish border guards, attempting to damage the fence to break through the defense line and enter Poland. Polish military and police personnel counterattacked with tear gas and water cannons.

At least three people were injured in the conflict that day.

On the same day that the refugees in the camp were resettled to the reception center, a plane carrying 431 people took off from Minsk, the capital of Belarus, and landed in Iraq.

Among the many refugees currently gathering at the borders of Belarus and Poland and Lithuania, many of them are Iraqi Kurds.

The latest changes surrounding the refugee crisis on the Polish-Belarusian border occurred after a telephone conversation between the leaders of Germany and Belarus.

Is it still far to end?

According to analysis, these latest changes may ease the escalating tension between Belarus and the European Union in the past few weeks.

However, Polish police said that many refugees are still trying to cross the border into Poland from other locations on the border.

The Polish government pointed out on the 20th that Belarus has changed its strategy and switched to guiding smaller groups of immigrants to cross the border from multiple locations on the eastern border of the European Union.

Polish Minister of Defense Buvascak said that he expects the border showdown to be too early to end.

Buvaschak said on the 20th: "We must be prepared. This problem will actually continue for several months. I have no doubt that the situation will develop in this direction."

According to the Polish News Agency, there are currently about 4,000 asylum-seekers on the border between Belarus and Poland.

The Polish Ministry of the Interior stated on November 15 that it would build a wall along the Belarusian border from December to stop the flow of refugees.

Ukraine, which also borders Belarus, warned on November 19 that for refugees trying to cross Ukraine from the Belarusian border into the EU, Ukraine will use all possible means, including shooting, to repel them.

Ukraine is worried that refugees blocked at the border between Poland and the Baltic States will try to enter the EU from Ukraine.

Kiev has stated earlier that it plans to deploy thousands of border guards and police on the border between Ukraine and Belarus.

Western countries accuse Belarus of deliberately creating this crisis, allowing immigrants mostly from the Middle East to enter, and then bringing immigrants to the border, promising them that they can easily cross the border into the European Union.

Belarus denies the allegations and instead criticizes the EU’s reluctance to accept immigrants.