Chen Lujun: Talking about the "reason" of contemporary China and crossing the "bridge" of international communication

On the morning of November 19th, the first China Network Civilization Conference opened in Beijing. In the afternoon, an online content construction forum co-sponsored by the Network Communication Bureau of the Central Cyberspace Administration and China News Service and undertaken by China News Network was held. Focusing on the theme of "telling Chinese stories well, helping network civilizatio 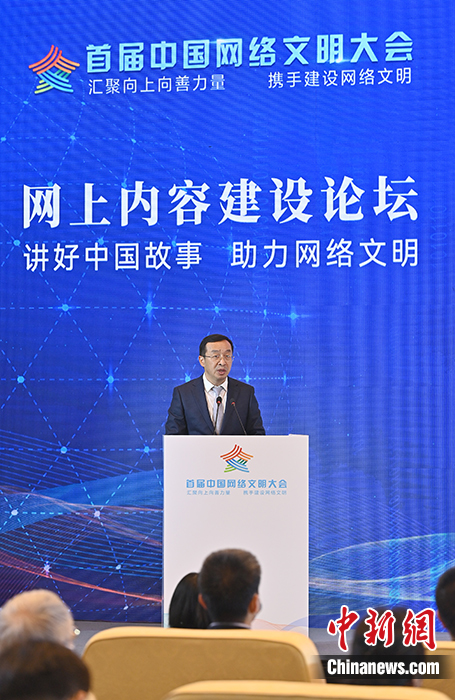 On the morning of November 19th, the first China Network Civilization Conference opened in Beijing.

In the afternoon, an online content construction forum co-sponsored by the Network Communication Bureau of the Central Cyberspace Administration and China News Service and undertaken by China News Network was held.

Focusing on the theme of "telling Chinese stories well, helping network civilization", the guests at the meeting discussed the "break" and "establishment" of Chinese narratives, the "root" and "soul" of Chinese stories, and the "time" and "potential" of China's development. In-depth discussion on how to tell the Chinese story well under the new situation, spread the voice of China, and create a credible, lovely and respectable image of China.

Chen Junjun, president of China News Agency, delivered a speech at the forum.

As the co-sponsor and organizer of this sub-forum, on behalf of China News Service and China News Network, I would like to extend my warm welcome and heartfelt thanks to everyone for coming.

In April 1995, China News Agency's manuscripts began to enter the Internet from Hong Kong, and it was one of the earliest Chinese media "on the Internet" in Asia.

Under the guidance of the Central Propaganda Department, the Central Cyberspace Administration of China, and the Overseas Chinese Affairs Office of the State Council, Chinanews.com is now a key news website of the central government. It is an important window for overseas Chinese and the international community to learn about China's development and progress and obtain various news and information.

present, the China News Agency is earnestly studying and implementing the spirit of the Sixth Plenary Session of the 19th Central Committee of the Communist Party of China. road.

On the topic of how to tell the story of China in the new era, Minister Pan and Director Niu have already given instructive explanations in their speeches just now.

Next, from the perspective of work implementation, I will talk about a few understandings.

1. Go back to China and talk about the "reason" of contemporary China

Since the beginning of this year, in the process of studying and comprehending General Secretary Xi Jinping’s important speech, we have noticed that more than one expert and scholar in the field of external communication has put forward the view that international communication work should "return to China" and regard it as a foreign speech. The logical basis of the Chinese story in the new era.

In practice, we feel that such judgments and strategic choices are at the right time and are very necessary.

"Returning to China" means to study China with the eyes and experience of contemporary Chinese people, to establish China's mainstream narrative about itself and the world, to explain Chinese practice with Chinese theory, and to sublimate Chinese theory with Chinese practice, which is more adequate , More vividly show the Chinese story and the ideological and spiritual power behind it.

"Returning to China" means going back to the Chinese experience, Chinese culture, and Chinese spirit itself, and clarifying the profound "reasons" contained in "why the Chinese Communist Party can, why Marxism works, and why socialism with Chinese characteristics is good".

Fundamentally speaking, the influence of international communication depends on the power of ideas and culture.

In this regard, we must have enough confidence in "returning to China" in publicity.

2. Emphasize differences and live the "bridge" of international communication

The construction and innovation of communication means are essential for doing a good job in external communication.

At present, although our country has initially established a multi-subject, three-dimensional large-scale external propaganda structure, and the international communication work has made great strides in scale, channels, technology and other fields, we must also clearly see that "the West is strong but we are weak." "The international communication pattern has not yet undergone a fundamental change.

In order to reduce the "exclusion phenomenon" and "cultural discount" in international communication, we need to study more in-depth the different political systems, development stages, cultural backgrounds, customs, lifestyles and religious beliefs of overseas audiences. When narrating, we strive to segment the audience, empathize with each other, make good use of the Internet, and make good use of the carrier so that the world can understand and recognize China's development and progress and contribution to the world.

3. Open the question mark and explore the "road" of Sino-New Zealand style

In the specific editing operations, we make good use of a small technique-focusing on finding and opening question marks.

We firmly believe that reporters are adepts, and even more inquirers, and those who are good at inquirers do!

Since 2021, the two new columns created by the China News Service-"One Hundred Thousand Whys of the Communist Party of China" and "Questions about East and West" have mainly focused on question marks.

On the occasion of the 100th anniversary of the Communist Party of China, we launched a series of columns to report "One Hundred

Thousand Whys of the

The column takes questions as the topic, combines history and theory, and connects the past and the present, spreading out the stories of the Communist Party of China full of details in the questions.

For example, "Why the CCP's Oath to Join the Party has been revised several times but it always emphasizes it?"

", on the profound meaning of the four words "never betray the party".

For another example, "The main entrance of Zhongnanhai, why are these five characters engraved on the screen wall?"

", talking about the original purpose of "serving the people".

Some of these manuscripts were reposted by overseas media, and the amount of reading and interaction on Twitter and Facebook platforms were also good.

Chen Junjun, president of China News Agency, delivered a speech at the forum.

Under the guidance of Minister Pan Yue, beginning in 2021, we will also launch a large-scale academic and rational media reporting column "Questions of East and West", which is dedicated to opening up the question mark of exchanges and mutual learning between Chinese and Western civilizations.

The opening article "Why do Chinese leaders publish New Year's greetings on New Year's Day instead of Spring Festival?"

"It is to introduce how China established the Gregorian calendar to achieve integration and exchanges with the world.

For example, "Sinologist Wan Bai'an: Why is there a portrait of Confucius in the head of the U.S. Supreme Court?"

"Introducing how Eastern Confucian culture is respected by the West.

Since the creation of the column, more than 200 reports have been published, focusing on the topics of culture, democracy, human rights, rule of law, Xinjiang-related, and Tibet-related topics. Accepted foreign discourse system.

We have a vision: After a period of unremitting efforts, we will build a recognizable and influential international communication brand-"Question of East and West". By comparing China and the West, we can make it clear that "Socialism with Chinese characteristics is human civilization." New form".

In short, China News Agency and China News Network will attach great importance to the construction of online content in the new era, and will strive to become online high-quality content production, supply, and dissemination institutions.

Finally, I wish this forum a complete success!

(According to the forum text live broadcast)