Usa, yes from Biden to drilling rigs: maxi auction for the Gulf of Mexico after COP26

Last week the US administration proposed another round of auctions in 2022 in Montana, Wyoming, Colorado and other western states 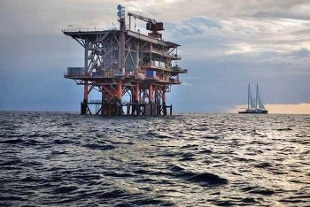 November 17, 2021 Only a few days have passed since the end of COP26 in Glasgow in which Joe Biden promised that the US will "lead by example" in the fight against climate change. Long enough, however, for the US administration to make a turnaround and launch a record auction of oil and gas drilling licenses in the Gulf of Mexico, an area already devastated by repeated crude oil spills.

This is an area of ​​approximately 352,000 sq km, as large as twice the size of Florida, with estimated reserves of up to 1.1 billion barrels of crude oil and 4.2 cubic tons of methane.

A slap in the face to the environmentalists, who this time denounce the hypocritical betrayal of the commitments made by the American president in front of the world, as well as in his country.

During the election campaign, Biden attacked Big Oil by promising that with him in the White House there would be no more subsidies for the fossil energy industry or drilling in federal waters and lands. The auction, the largest single sale since 2017, now undermines the president's green credibility and will make it more difficult to avoid the catastrophic impacts of global emissions.

"Occurring in the aftermath of the climate summit is only disconcerting. It is difficult to imagine a more hypocritical and dangerous thing for this administration to do," accuses Kristen Monsell, a lawyer with the Center for Biological Diversity. "A huge climate bomb", adds Earthjustice, one of the ecological groups that filed an appeal, stating that there is no adequate environmental impact assessment.

Other detractors argue that the Biden government has issued drilling permits at a rate of more than 300 per day since its inauguration, higher than that of the Trump presidency. Last week, the administration proposed another round of auctions in 2022 in Montana, Wyoming, Colorado and other western states.

Criticism and disappointment even in Biden's party

"This administration went to Scotland and told the world that America's climate leadership is back, and is now delivering thousands of sq km of public Gulf of Mexico water to oil companies," he laments. Raul Grijalva, President (Dem) of the House Commission on Natural Resources. "This auction is a step in the wrong direction," he adds.

The Biden government defends itself by explaining that it was forced to ban the auction after a federal judge, upholding the appeal of a dozen republican states, rejected the moratorium on license sales decreed by the president pending a comprehensive review. But legal experts such as Max Sarinsky, a senior attorney at New York University School of Law, say the court's decision, by itself, does not prevent the administration from stopping or delaying the auction or resizing it, while risking other appeals.

It will take the oil majors years to develop the fields and begin pumping oil, probably after 2030. Just when the world should be on the road to further cutting greenhouse gas emissions to avoid climate catastrophe.