"Europe is hit by a new wave. Some particularly large and well-organized countries appear to be in serious difficulty. In our country, thanks to the seriousness of our citizens, the situation is less alarming" said the Head of State attending the inauguration ceremony. of the academic year of the University of Siena 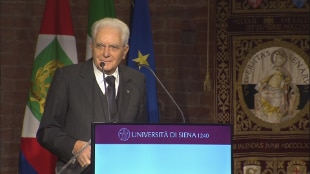 November 15, 2021 "We are facing a period in which infections resume, Europe is hit by a new wave of infections. And it is invested in some particularly large and well-organized countries that appear to be in serious difficulty. In our country, thanks to the seriousness of our citizens the situation is less alarming but we record a constant, limited but progressively and slowly constant increase in contagion ". This was stated by the President of the Republic Sergio Mattarella participating in the inauguration ceremony of the 781th academic year of the University of Siena.

"This - continues Mattarella - reminds us of the duty to carefully observe the rules of caution that have been indicated and to consider the importance of relying on science". To the covid pandemic "we reacted as a country, thanks to almost all of our fellow citizens, with a great sense of responsibility, showing respect for others and for the common interest" added the Head of State.

"On Afghan reception given EU inconsistency and contradiction"

In "various parts of the European Union" we have seen a "phenomenon of misalignment, inconsistency and contradiction between the principles of the Union, the solemn affirmations of solidarity for the Afghans and the refusal to accept them. intentions of the founders of the Union who indicated, identified, vast and important horizons aware of the difficulties in reaching them ", the President of the Republic said in another passage of his speech.

Speaking again of migrants, of welcome, Mattarella then stressed: "There are conditions that are disconcerting. It is disconcerting what happens in several places on the borders of the Union". "It is surprising - he explains - the gap between the great principles proclaimed and the neglect of the hunger and cold to which human beings are exposed at the borders of the Union".

Disabled, "there are still too many cultural and mental delays"

"On the issue of disability we have made many steps forward in the country but we are still very far from a suitable condition, even for some delays" said Mattarella. And he adds: "We have advanced rules but delays of a cultural nature, mentality and awareness, on the fact that the world of disability constitutes a reservoir of important energies and resources which can be expressed and realized out of respect but also in the interest of society" .

"Magnificent rector, I don't know if they have been done in some University, but, if this were not the case, a study would be useful to investigate the consequences of the excessive use of acronyms on language and ease of communication" said the Head of State addressing the rector Francesco Frati, and introducing a passage, in his greeting, dedicated to the Pnrr. And precisely with regard to the National Recovery and Resilience Plan, he stresses that there are three major missions "the fourth concerns universities and schools with the great objective of increasing the role, the university offer and expanding the offer and quality, accompanying with resources in an important way. Universities are indispensable for the development and revitalization of the country and their role is essential ".

"It is essential to increase structures, to make our country grow on a cultural level. We increasingly need to develop knowledge to find research and study perspectives placed at the service of the human person", added Mattarella.

"The idea that life is constituted by a succession of ordered events, or by rhythms that are always the same and unchangeable, has always been an illusion. That someone still cultivates today, to tell the truth. It has always been an illusion - points out the President of the Republic - even in times when changes were much slower than what happens in our times ". "This - he continues - can naturally lead to some sense of uncertainty, insecurity and fragility and against these feelings there is only one antidote: the one cultivated and implemented throughout his life by Antonio Cassese. Some fixed points of an ethical nature , and some essential principles of coexistence ".

The President of the Republic recalls that in the face of

feelings of insecurity and fragility there is only one antidote: the principles of coexistence and of an ethical nature. # University # Siena # 781USiena pic.twitter.com/HXwV3SNqO2

The Head of State after the inauguration ceremony of the Academic Year went to the Toscana Life Sciences Foundation in Siena, a center in which laboratories are being held developing monoclonal antibodies against Covid.