Cop 26, Cingolani: "On the climate 194 states that are looking for a solution and democracy, not blah blah"

"It is unthinkable to make an epochal revolution with a COP but progress has been made by keeping global warming at about 1.5 degrees", recalled the Minister for Ecological Transition. There remain unresolved issues "starting precisely with the absence of a certain date for the abandonment of coal"&nbsp; 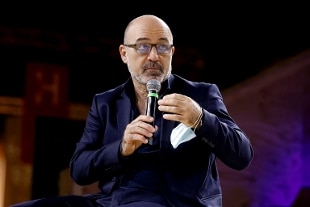 November 15, 2021 "We are faced with problems of historical significance. The solutions are not simple, they are very complicated things", "be careful not to simplify too much and be careful not to have too many expectations". This was stated by the Minister of Ecological Transition, Roberto Cingolani, on Radio24 commenting on the criticisms of Greta Thumberg on Cop 26. "I understand that young activists must keep their attention very high and contest", "But 194 States that for 2 weeks they lock in a room, to find a solution, it's democracy, it's not 'bla bla bla'. I don't think going around the streets screaming and playing is effective "

" Very dissatisfied with the financial part "

"I am very dissatisfied with the financial part. I am not convinced that everyone has understood the importance of solidarity," said Cingolani. For the countries most in difficulty "since 2015, 100 billion a year had been promised, we have not yet reached it, perhaps this year we will touch them". As for Italy, "we have tripled our figures for half a billion this year." Cop.

"Unthinkable to make an epochal revolution with a Cop. But taken a step forward "

The minister in an interview with the newspaper

commenting on the final outcome of COP26 he also underlined: "It is unthinkable to make an epochal revolution with a COP. But this year a step forward has been made, because all the States have agreed on the need to accelerate the achievement of the Paris Agreement, keeping global warming at around 1.5 degrees (instead of 2) in the second half of the century. "

As for India's position, Cingolani explained: "The Indian minister clearly told us that he would adhere to the final resolution on 1.5 degrees, only if the pressure on the total abandonment of coal was eased. A way to have more time, organize the energy transition and in the meantime grow, but adhering to the global goal of 1.5 degrees of global warming in the second half of the century together with all the other countries. They are skilled negotiators: if we had opted for the wall against wall, the Indians would have freed themselves from any commitment and would have produced all the CO2 possible, making the change irreversible and the efforts of the rest of the world useless ".

At the Glasgow conference, says the minister, "precise rules were agreed for finances, for transparency and the verification of what was declared by the States. Processes and methods that were the same for all were agreed, which starting from the next COP will allow to manage better aid and efforts. It may seem little, but it is not. Of course, to obtain these agreements it was necessary to come to terms with countries that use intensive coal ".

There remain unresolved issues "starting precisely with the absence of a certain date for the abandonment of coal", says Cingolani.