"The aggravation game": why Latvia conducts military exercises The Decisive Point near the border with Belarus

Large-scale maneuvers The Decisive Point have started in Latvia near the border with Belarus. About three thousand servicemen are involved in them. According to the head of the Latvian Defense Ministry Artis Pabriks, the exercise is connected with the migration crisis on the border of Latvia, Lithuania and Poland with Belarus. The purpose of the maneuvers will be to test joint collaboration, team structures, logistics, mobility and decision-making procedures. According to experts, the organization of such trainings is "another manifestation of anti-Belarusian and anti-Russian psychosis." According to analysts, in this way Riga intends to increase the degree of unfriendly sentiments towards Moscow and Minsk, as well as aggravate the situation on the border. 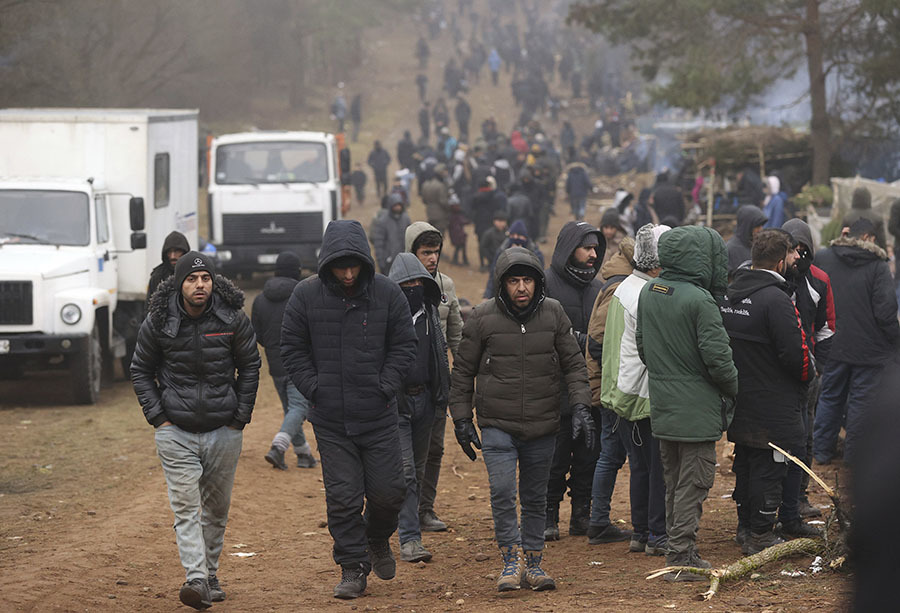 Large-scale military exercises The Decisive Point have started in Latvia near the border with Belarus.

About three thousand servicemen are involved in them.

This was stated by the head of the Ministry of Defense Artis Pabriks to the Latvian television.

“I asked to announce military exercises in the Latgale region so that our Belarusian colleagues, if you can call them that, would know that it was not just that.

The training will last about a month, ”the head of the Latvian Defense Ministry quoted TASS as saying.

According to official figures, the purpose of the maneuvers underway is to test joint cooperation, team structures, logistics, mobility and decision-making procedures.

As noted by Pabriks, he ordered the exercises due to the growing likelihood that new groups of migrants in Belarus could be sent to the border with Latvia.

In addition, the Latvian minister admitted the possibility of NATO's application of Article 4 of the North Atlantic Treaty in connection with the migration crisis.

The norm presupposes holding consultations of the bloc members if, in the opinion of one of the parties, the territorial integrity, political independence or security of any of the allies in the alliance is threatened.

“I cannot exclude the possibility that we can apply with such a request to consider the need for consultations on the 4th article.

At the moment, I don’t think this is so, but we discussed it - it has been on the agenda since the beginning of the crisis.

It is clear that the initiator will be the country on which the main hybrid strike will be dealt, but in general, if the situation continues to deteriorate and there is a need for such consultations, we will do it together, ”he said.

Earlier, Polish Prime Minister Mateusz Morawiecki said that NATO should take concrete steps to resolve the migration crisis on the border with Belarus.

He stated that Warsaw, together with Riga and Vilnius, could request the application of Article 4 of the North Atlantic Treaty agreement.

Let us remind you that on November 11, the Latvian military department published a joint statement by the defense ministers of Latvia, Estonia and Lithuania, in which Minsk is accused of provoking a migration crisis on the border of Belarus with Poland and the Republic of Lithuania.

The Baltic states believe that the actions of the Belarusian side pose a serious threat to European security.

“Large groups of people are pulled together and brought to the border zone, where they are then forced to illegally cross the border.

This increases the likelihood of provocations and serious incidents that can turn into a military plane, ”the message says.

Riga, Vilnius and Tallinn view the current situation on the Belarusian border “as the most difficult security crisis in many years” for the region, NATO and the European Union.

The joint statement of the parties also speaks of the need to "fully support" the neighbors and to make sure that "not a single step on the part of Belarus or Russia goes unnoticed."

“The unfolding crisis requires from NATO allies and EU states continuous cohesion, a common understanding of the situation and a common approach to ensure that deliberate attempts by Belarus and Russia to destabilize the security situation in Europe fail,” the statement reads.

The next day, NATO Secretary General Jens Stoltenberg accused Minsk of provoking a migration crisis at the border, and also said that the alliance continues to "monitor the situation."

“NATO strongly condemns the hybrid actions of Belarus against Poland, Lithuania and Latvia,” he wrote on his Twitter page.

We remain vigilant, continue to monitor the situation & call on Belarus to respect human rights, fundamental freedoms, and abide by international law.

After that, on November 14, the Minister of Foreign Affairs of Latvia Edgars Rinkevics said that “a dangerous situation had developed” on the Polish-Belarusian border.

“Latvia expresses solidarity and support to our Polish friends and allies, we are coordinating our actions within NATO and the EU to protect our borders,” he said on his Twitter.

Situation at the Polish Belarusian border is dangerous, Latvia expresses its solidarity and support to our Polish friends and allies, we are coordinating our actions within NATO and EU in order to protect our borders @ RauZbigniew @ PolandMFA

Before leaving for the European Council on Foreign Relations in Brussels, Rinkevichs also expressed concern that new units of the Belarusian Armed Forces are appearing on the Belarusian border, as well as maneuvers with the participation of the Russian armed forces.

It should be noted that Minsk and Moscow deny their involvement in provoking the migration crisis.

So, on November 15, President of Belarus Alexander Lukashenko said that Minsk is not interested in a conflict on the state border.

However, according to him, it is necessary for Vilnius.

“Our journalists and others correctly draw conclusions that Poland needs this conflict today.

There are more than enough internal problems, problems with the European Union ... Once again, I want to emphasize: we do not want any conflict, "the Pool of the First Telegram channel quoted the Belarusian leader as saying.

As Lukashenko noted, the conflict on the state border is causing great damage to Belarus.

“I want everyone to know that we have absolutely nothing to do with it.

Everyone is trying to impose any responsibility on us for any reason and for no reason at all, ”the Russian leader said in an interview with Pavel Zarubin on the Moscow.

According to the President of Russia, the accusations against Moscow of involvement in the migration crisis are an attempt to shift problems "from a sore head to a healthy one."

“They (the countries of the West.

I said why: for political, military, and economic reasons.

We ourselves have created the conditions for thousands and hundreds of thousands of people to go.

And now they are looking for the guilty in order to absolve themselves of responsibility for the events taking place, ”Putin stressed.

"In line with NATO ideology"

As the military observer, retired colonel Viktor Baranets, noted in an interview with RT, holding military exercises by Latvia near the Belarusian border against the background of the migration crisis is "another manifestation of anti-Belarusian and anti-Russian psychosis."

“Under the guise of its unfounded statements about provoking the crisis by Minsk and Moscow, Riga initiated military maneuvers.

And all this in the name of combating the Russian and Belarusian threats, allegedly threatening the security of the Baltic republic, ”Baranets said.

In fact, we are talking about deliberately inflating these threats, the analyst is sure.

According to him, Latvia, like other Baltic countries, never ceases to frighten its citizens with them.

“Riga, like Vilnius and Tallinn, is working in line with NATO ideology, voicing the thesis that Russia and Belarus are allegedly preparing the occupation of the Baltic states, but now under a migration sauce.

And this is being done at the suggestion of the United States and the North Atlantic Alliance, for which it is beneficial to support the anti-Russian and anti-Belarusian hysteria.

After all, if the image of the enemy disappears, the raison d'être of NATO will also disappear, ”Baranets said.

In his opinion, the Latvian exercises The Decisive Point should be viewed as part of a "single plan for the reaction" of Poland, the Baltic countries and NATO to what is happening on the Belarusian border.

“Riga, like Vilnius, Tallinn and Warsaw, is coordinating this plan with the alliance, literally working on a leash at the bloc.

Talk about the application of the 4th article of the North Atlantic Treaty also speaks of this.

Such maneuvers are needed in order to further increase the degree of anti-Belarusian and anti-Russian sentiments.

It is also a kind of big game to exacerbate the situation, an attempt to provoke Minsk and Moscow, ”the analyst said.

He also added that the legend of the Latvian exercises is probably built precisely on the opposition to the notorious military intervention of Russia and Belarus.

“This is the kind of madness that reigns in the minds of the Latvian authorities and military commanders,” said Baranets.

He also stressed that the possibility of joint military action between Russia and Belarus "has long been a bone in the throat" for the Baltic states and Poland.

“They are very much afraid of the joint military potential of Minsk and Moscow, which Western propaganda presents not as an attempt to defend itself, but as a means of attack,” the expert said.

According to Oleg Nemensky, a leading researcher at the Russian Institute for Strategic Studies, Riga is deliberately aggravating the situation on the Belarusian border with its exercises.

“This whole situation was created for political reasons and is used to increase the pressure of the West on Minsk and Moscow.

However, none of the Latvian authorities say that the main responsibility for what is happening lies with the Western countries, which provoked migration flows with their military operations, and not in Belarus and Russia, ”the expert said in an interview with RT.

Nemensky believes that through the exercises, as well as anti-Russian and anti-Belarusian rhetoric, Riga wants to increase its importance in the eyes of NATO and in the Western community, as well as to strengthen the NATO presence on the eastern borders.

The analyst believes that provocations may be observed during the maneuvers of the Latvian side of The Decisive Point.

“Such incidents can be dangerous, but Moscow and Minsk are monitoring the situation and, if necessary, will be ready to take measures to repel such attacks,” the analyst concluded.