Elizabeth II will not be back in public today to celebrate the fallen, due to a back problem

Perhaps a tear in the back for the sovereign, who will miss the traditional ceremony of the fallen of the Second World War. Buckingham Palace: "the Queen is disappointed" not to be able to attend 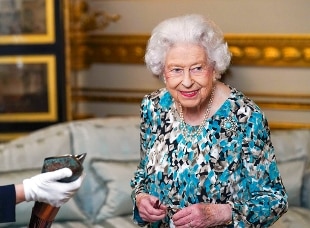 November 14, 2021 Buckingham Palace has announced that Queen Elizabeth will not participate, as announced a few days ago, in the commemorations for the war dead due to a back problem. Sky news reports it. The 95-year-old sovereign was due to attend Remembrance Sunday at the Cenotaph in honor of the fallen of the Second World War, after a break imposed by health reasons. Perhaps a tear instead keeps it away.

For the 95-year-old monarch, it would have been the official return to public, after the night of hospitalization in October and the three weeks of rest. This year the return to normal after Covid hardships, with 10,000 veterans and hundreds of soldiers present at the function and a large crowd to watch.

Buckingham Palace said the monarch is "disappointed" at not being able to attend the event. A few days ago he made it known that it was the Queen's "firm intention" to attend the laying ceremony of the traditional poppy wreath, after missing several other events, including the Festival of Remembrance at the Royal Albert Hall yesterday. Charles, the Prince of Wales, will deposit the crown on the steps of the Cenotaph in place of Elizabeth, who was supposed to watch from the balcony of one of Whitehall's government buildings, as in previous years. The monarch, who experienced World War II as a teenager, is also the head of the Armed Forces and cares a lot about this celebration.

Prime Minister Boris Johnson will join members of the Royal Family in laying a wreath at the war memorial in the center of the British capital.

At 11.00 local time, 12.00 in Italy, a minute of silence will be observed at the national level to remember those who fought and died in past conflicts.

In 2022 the Platinum Jubilee awaits him, that is his 70 years of reign, and therefore many events are scheduled, including institutional meetings and various ceremonies.

"The queen is fine," assured her son Charles, but the Palace has decided to support her with a senior member of the Windsor family for every public event.