Year I of the Covid: historical record of suicides

2020, Year I of the Pandemic among other things, has been the one with the most suicides in the history of Spain since 1906, the first for which data are available: 3,941 people sent to the ... 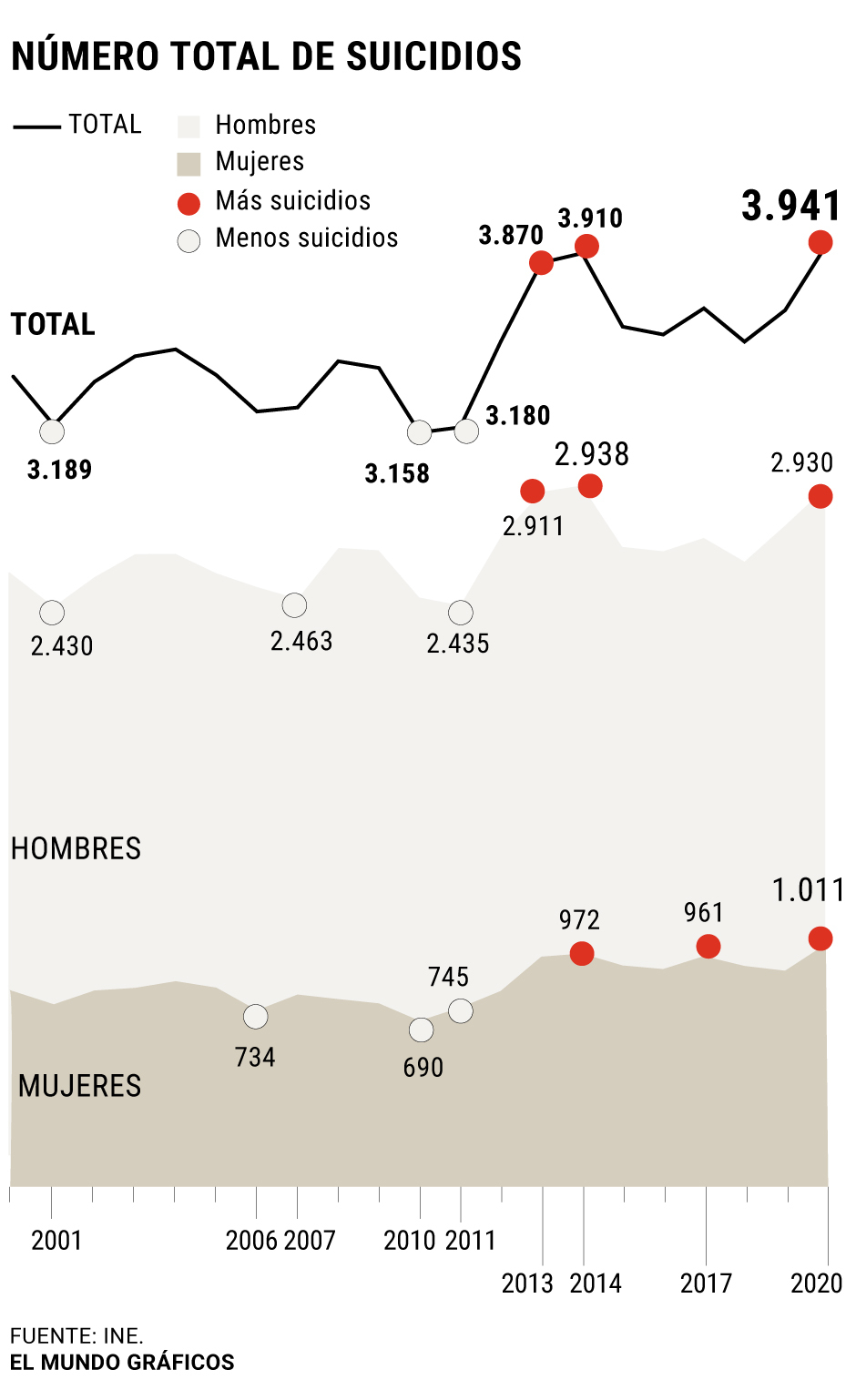 among other things, has been the one with the most

in the history of Spain since 1906, the first for which there is data: 3,941 people sent to death because of their grief, boredom and hopelessness.

One every two and a quarter hours.

We are talking about the

first cause of unnatural death in Spain

And in young people between 15 and 29 years old, the first after tumors by 30 people of difference.

Completed suicide almost triples (2.7) for the first time the number of deaths

And it produces 13.6 times more deaths than

in its death result.

Was it the pandemic?

is a contextual risk factor that adds to the multicausality of suicide. Covid does not generate suicide, it is one more factor. And, having said that, the pandemic has affected the

that we already knew and has threatened

, such as social cohesion. We will need more years to empirically prove that Covid influences. The hypothesis is that it does. But it is not inevitable. We are on time.

It is the clinical psychologist

, head of the Unit for Prevention and Intensive Intervention in Suicidal Behavior and coordinator of the Community Mental Health Unit of Marbella, who embeds these quotes to summarize the incidence of the pandemic: "Covid is a storm that we have all crossed, but some by yacht and others in a rowboat. The pandemic has not been democratic, it has affected the most vulnerable more. "

Drawing on his own therapies and collective research, Guerrero sees what has happened in 2020. And it is a lot: "The risk factors for suicide have increased.

... And serious mental disorders have worsened due to

, the drop in presence, poor telemedicine ... The health system has put up many barriers. Resources allocated to Covid have been diverted to the detriment of

and Mental Health The

, unemployment and loss of income generate uncertainties and many problems.

I can provide therapy, but not a house and there are people who come to the consultation by car because they live in the car.

have had a cost: grief, illness itself, domestic and gender violence ... All this, together with loneliness, has caused people to get caught up in problems.

And think more about taking your own life. "

The data collected by the

For the first time there are more than 1,000 deaths of women and suicide in children doubles

Although, as in all countries,

(1,011) and they try three times more than they (Suicide Observatory in Spain), this is the first time that the

In just 12 months, suicide in people

And this own death has

under 15 years of age

"The Covid has generated

, difficulty in emotional regulation in people who had previous or supervening problems and

to those who were in treatment. And all that,

is co-director of the ISNISS Project for the investigation of self-destructive behaviors, self-harm and suicide of the Health Psychology Doctoral Program of the

the Official College of Psychology of Madrid

, member and founding partner of the

and author of publications such as

"There are very serious data. That of the elderly is linked to

, common factors but aggravated by the pandemic. And that of those under 15 years of age indicates that it is not true that the kids have coped well with the pandemic. It is said but it is a lie. We see many

and suicidal ideation, a more common thought about death than there was before. I see it in consultation. "

Although figures are still lacking, experts believe that the increase in suicides in 2020 is extensible to other countries, an effect of the global pandemic and its crises.

But if we talk about ours, the X-ray made by the

reveals that in April 2020 (hard confinement) there were 18% fewer suicides than in April 2019 and in August (de-escalated), 34% more than in August of the previous year. "A significant decrease in coherence with the generalized traffic accidents and homicides caused by the confinement was expected for 2020 (since this makes suicide difficult both on public roads, because it was forbidden to wander through it, and in homes, since it was However, it seems that after confinement there has been a

in the lead, but with a proportional increase it places another community on the cusp of this death: in the

suicides have increased by 30% in one year.

And what about attempts and ideations?

What about untold death?

cites the WHO and other epidemiological studies to calculate about 20 completed suicide attempts and between 5% and 10% of people with suicidal ideation at some point in their life.

"This means that in a year there could be around

and that between two and four million people have suicidal ideation throughout their lives. Spain does not have any state plan or strategy for the prevention of suicide" .

Covid-19 90% of the vaccinated population is still far away: "Some Autonomous Communities are going to arrive, it is difficult for all of them to do so"

Health How many vaccines have been given in Spain?

This is how vaccination against Covid-19 advances in each community