Migrant crisis, Lukashenko: "We will react to the new European sanctions"

The Belarusian president threatens to block the passage of gas to Europe. US prepare new sanctions 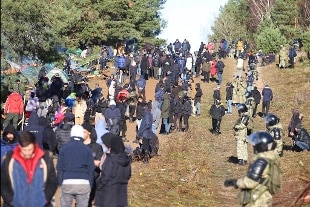 Lukashenko has threatened to interrupt the transit of gas to Europe through the Yamal-Europe pipeline if the EU expands sanctions: Tass reports, in turn citing the Belarusian agency Belta.

"We supply heat to Europe, and what's more they threaten to close the border. What if we cut off the supply of natural gas there?" Lukashenko said.

Gentiloni: we do not allow ourselves to be intimidated

"We certainly do not let ourselves be intimidated by Lukashenko's threats." Thus the EU Economy Commissioner, Paolo Gentiloni, responding to journalists at a press conference after the Belarusian president's threats to cut gas supplies to Europe in the context of the migration crisis on the borders with the European Union. "When we talk about the strategic autonomy of the EU in the energy field it will be fundamental in the medium term, in the short term we must certainly work to make the best use of existing relations, both with North Africa, with Norway, with Russia", he stressed.

"The EU strongly condemns the Lukashenko regime for deliberately endangering people's lives and well-being. It not only violates international law, but also ignores the basic human rights that Belarus has committed to. Such inhumane actions. they require strong international reaction and cooperation in order to hold the Belarusian regime responsible for these violations. International organizations must have immediate and unhindered access to the people who are there to provide humanitarian assistance. " This is what the High Representative for EU foreign policy, Josep Borrell, declared yesterday on behalf of the European Union.

"The EU will continue to tackle state-sponsored illegal migration, including smuggling of migrants, organized by the Belarusian regime, including by expanding our sanctions regime so that the EU can target those involved and contributing to the activities. of the Lukashenko regime which facilitate the illegality of crossing the external borders of the Union. The exploitation of migrants for political purposes cannot be tolerated. We will also continue to denounce the human rights violations perpetrated by the regime against its own citizens, to consider further restrictive measures against those responsible and to support the Belarusian people ", he concludes.

The Belarusian Ministry of Defense has accused Poland of an "unprecedented" military strengthening at the border, stating that the control over the migratory situation does not justify the concentration of 15 thousand soldiers with tanks, defense aircraft and other weapons. The LaPresse agency reports it. "It looks more like they form a group of strike forces," Minsk stressed, adding that military build-up has prompted Belarus to respond with actions "both independently and within existing agreements with our strategic ally. ", referring to Russia.

The United States is preparing new sanctions against Belarus, responsible for "ongoing attacks on democracy, human rights and international norms". This was announced by a spokesman for the National Security Council of the White House, quoted by CNN. "We are very concerned about the inhumane actions of the Lukashenko regime and strongly condemn the brutal exploitation and violence against vulnerable people", the spokesman stressed, adding that the new sanctions will be announced in "close coordination with the European Union. and other partners and allies ".

Schinas traveling to the migrants' countries of origin

European Commission Vice President Margaritis Schinas began her journey to countries of origin and transit to carry out diplomatic work to discourage departures to Belarus, where migrants are used as tools for hybrid attacks against the European Union.

"Today Schinas is in the United Arab Emirates, while tomorrow it will be in Lebanon. Other destinations will be announced in the coming days," explained the spokeswoman for the Community Executive, Dana Spinant.