Twice as many forcibly taken children in Gällivare - parents demonstrate

On Wednesday, several parents demonstrated outside the town hall in Gällivare. They gathered under the slogan "Stop the hunt for our children" and are addressed to the Social Administration, which in the past year has doubled the number of children in care according to the Act on the Care of Young People (LVU). 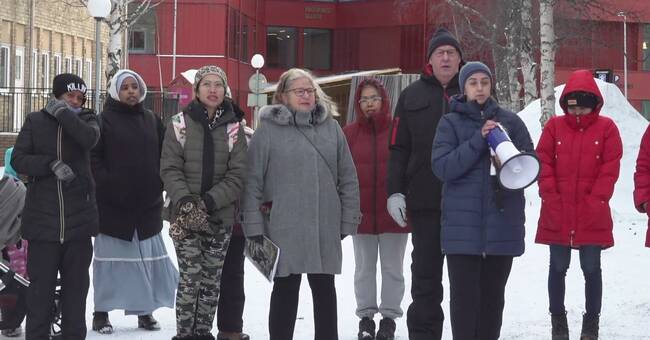 The parents believe that many of the children are taken from schools, preschools and homes without warning.

They believe that the municipality's care is based on deficient and one-sided investigations which also puts the parents in a legally impossible situation to protect their children.

Eva Alriksson, M-politician in Gällivare, is a representative and language support for three families where a total of seven children have been forcibly taken into care.

- The care has been taken without any prior warning.

There is a report of concern - bang - then you go home and take the children, she tells SVT.

Places the children 400 km away

Alriksson believes that the municipality lacks in the preventive work such as calls and home visits.

- Suddenly there are police and social workers at the door who pick up the children and place them 400 km away in Skellefteå or Umeå, she says.

- We take the reports of unrest very seriously, says Johannes Sundelin (S), chairman of the social committee in Gällivare.

In the video, you see pictures from the demonstration outside the town hall in Gällivare.