More than 1,200 people were arrested by the National Immigration Administration to detect a case of a major organization transporting others to illegally cross the border

Chinanews.com, Beijing, November 5 (Reporter Guo Chaokai) The reporter learned from the press conference of the National Immigration Administration on the 5th that the bureau recently organized and directed the detection of a case of a major organization transporting others across the country (frontier) and arrested illegal crimes. There are 1292 personnel. Stowaways seized in the jungle. Photo 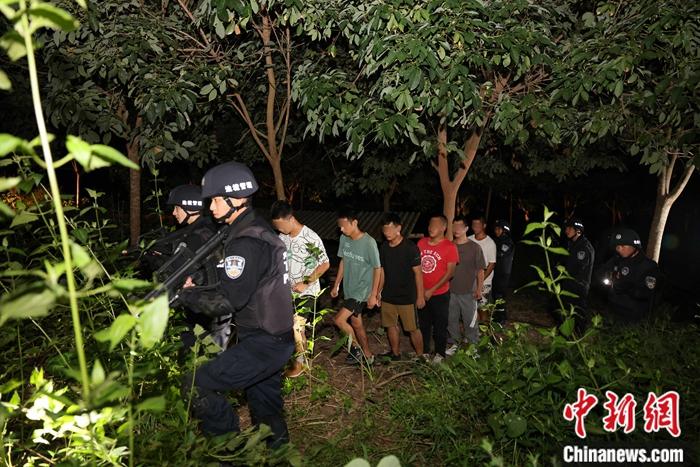 Chinanews.com, Beijing, November 5 (Reporter Guo Chaokai) The reporter learned from the press conference of the National Immigration Administration on the 5th that the bureau recently organized and directed the detection of a case of a major organization transporting others across the country (frontier) and arrested illegal crimes. There are 1292 personnel.

Stowaways seized in the jungle.

Recently, the National Immigration Administration, in conjunction with the relevant business bureaus of the Ministry of Public Security, organized and commanded the Yunnan General Entry-Exit Border Inspection Station and the public security organs of 25 provinces (autonomous regions and municipalities) including Fujian, Hunan, Guangdong, and Guizhou to conduct unified operations in more than 60 prefectures and cities. Collecting the Internet in a centralized manner, successfully cracked a major case of the "1·24" organization transporting others to cross the border of the country (frontier).

Up to now, a total of 573 cases (including 124 criminal cases and 449 administrative cases) have been registered according to law, 1,292 criminals have been arrested, 593 people have been held criminally responsible according to law, 699 people have been administratively punished, and 38 hiding and transit dens have been destroyed. , Seized 108 vehicles (ships) involved in the case, frozen 26 bank accounts used to organize smuggling crimes, with a capital of 1,748,100 yuan, seized 62.13 kilograms of methamphetamine, and destroyed Zhang, Li, Chen, and Li in one fell swoop Multiple criminal gangs headed by Liang and others have completely destroyed a entrenched and active in the southwest border of China and the border areas of adjacent countries, colluding with each other to organize the smuggling of Chinese citizens into and out of China, and engage in telecommunications fraud, Internet gambling, drug trafficking and other cross-border crimes. The huge criminal network has achieved significant results.

Stowaways seized on the front line of the border.

Stowaways seized in the pigpen.

The case is led by the National Immigration Administration, with the participation of multiple police types and linkages in multiple locations, using the model of "ministerial command, one province to conduct investigations, multiple locations, cluster operations, and wave strikes" to integrate various types of police resources at all levels and insist on "Fighting gangs, breaking channels, cutting chains, and destroying the Internet", meticulously carried out three-dimensional and comprehensive investigation measures such as clue verification, interrogation investigation, extended strikes, etc., realized simultaneous collection of the Internet at home and abroad, integrated combat against multiple crimes, and integrated criminal administration Punishment, crackdown and punishment are both at the same time, resolutely destroying smuggling passages inside and outside the country, achieving good crackdown, legal and social effects.

The police of the task force seized drugs.

It is understood that since December 2020, the Ministry of Public Security deployed and launched a special fight against crimes that interfered with state (border) border management, a total of 14,973 criminal cases have been investigated and handled across the country, with 35,777 suspects arrested and smuggling arrested. There were 36,921 personnel, which were 2.2 times, 2.7 times, and 3.3 times that of the same period last year. A total of 523 criminal gangs were destroyed and 167 transit dens were destroyed. 1549 vehicles (ships) of transportation vehicles were seized, and intermediaries and illegal employment were investigated and dealt with. 514 enterprises.

In the next step, the National Immigration Administration will continue to maintain a strict prevention and crackdown on crimes that interfere with the management of the country (border), insist on opening the way, making efforts with precision, fully investigating and handling major cases, focusing on promoting concentrated pursuit of escape actions, and in-depth rectification Sources, severely crack down on crimes, severely punish lawbreakers, resolutely safeguard national political security, and resolutely safeguard national border security and stability.