The assistant nurse on the Municipal chairman's swing in the LAS issue: "Sold us out for a political career"

The dispute over the January agreement and the so-called LAS agreement shook trade union Sweden. The union's chairman Tobias Baudin went out in a stubborn refusal to agree to changes in the Employment Protection Act - but changed. Something he gets harsh criticism for today. - He has sold us out for a political career, says assistant nurse Mia Christensson. 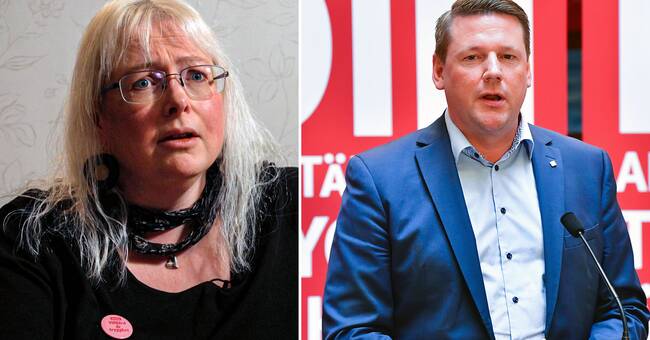 Assignment review has been able to tell about a widespread internal criticism within S that the party did not see in time that it lost core voters, the LO members, to SD.

And there is an issue that has aroused debate within the LO movement, among S-voters and left-wing parties.

This is about the so-called January agreement.

S settled with C, L and MP after the 2018 election - which made it possible for Stefan Löfven to be elected prime minister and form a government.

The January agreement entailed changes to the Employment Protection Act, LAS, and the government threatened legislation if the parties could not agree.

But when negotiations began between LO and the Confederation of Swedish Enterprise, LO split.

Several unions protested, one of which was Pappers.

- I talked to our then union president Mats Jutterström the evening when the January agreement was presented and said: "How the hell should I be able to go out to my colleagues in the next election and say that you should vote for the Social Democrats?", Says Rainor Melander, Social Democrat and department chairman for Paper at the paper mill in Bollstabruk.

“Someone who takes the fight”

One of the clearest critics was Kommunal's chairman Tobias Baudin, who went out and said that he refused to participate in negotiations and would not approve any changes in labor law.

What she saw in Baudin then was "a great union leader," she says.

- Now damn, we have someone who takes the fight for us.

Who sits there for us, who sees us and knows what it's about, she says.

Together with other union activists, Mia Christensson spread a cross-union messenger roll, a kind of protest list, to support opposition to the LAS changes.

But Kommunal's management did not want the union to adopt it - and when Mia Christensson wanted to take up the ballot for a vote at the annual meeting in her section, it was stopped.

The same thing happened in Jönköping.

Why do you think it is so obvious that you as a member should be able to get a vote?

That is what makes the members get involved, says Mia Christensson.

Håkan Jörnborn, left-wing party member and local councilor from Jönköping, thinks it is startling that the message roll was silenced, as he puts it.

- The members should have the power to bring up what they want at annual meetings, shouldn't the union leadership take a stand on that?

Especially not in a question that at least outwardly agreed on: "Do not touch LAS"?

Baudin's explanation was that Kommunal would not take a position, but that the members obviously had to take a position themselves on what they wanted to write on.

At the same time, he was clear that Kommunal would not accept any changes in LAS.

When the whole LO had finally said no, the question became:

Would Stefan Löfven run over LO with legislation - or risk his government?

He never had to make that decision, because Tobias Baudin changed his mind.

Löfven brought with him the two largest unions, when Kommunal and IF Metall settled with Näringslivet on their own.

One of the results is that it will be easier to dismiss for personal reasons and that the employer will have more freedom of choice at greater notice.

To Assignment review, Tobias Baudin says today that he agreed to a deterioration in the rules of priority.

But he does not think it was a concession to the Social Democrats.

- Now we had the opportunity to influence the legislation that would still have applied and make it better, and we did.

Tobias Baudin is now proposed to become the new party secretary for the Social Democrats.

- It was thanks from S that he sold us out, says assistant nurse Mia Christensson.

The municipal chairman says that he is sad when he hears it.

- It's definitely not true.

Every day I have fought to strengthen Kommunal as a trade union.