The old red district missed by the general secretary丨"Western Fujian, I am very familiar with it" 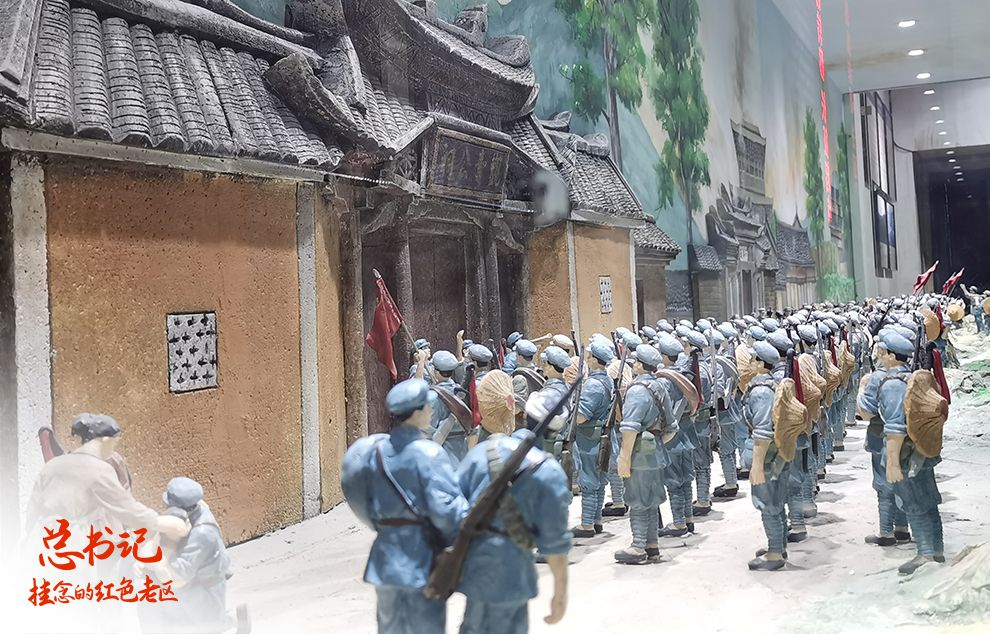 While working in the local area, he has been paying attention to the development of the local old districts and the living conditions of the people in the old districts.

Since the 18th National Congress of the Communist Party of China, the general secretary's concern for the old district has remained the same.

He frequently set foot on the red land to visit and sympathize with the people in the old districts.

|Learning every day|Minxi Su District, located in the southwest of Fujian Province, mainly includes Shanghang, Yongding, Liancheng, Wuping, Changting in Longyan City and Qingliu, Ninghua, Mingxi and other counties in Sanming City. Unique mountain dangerous conditions make it here During the Revolutionary War, a "red pattern among the surrounding white regimes" was formed.

In this red land, Comrade Mao Zedong once wrote "Gutian Conference Resolution", "A single spark can start a prairie fire", "Caixi Township Investigation" and other works.

The famous Gutian Conference (the Ninth Party Congress of the Fourth Red Army in 1929) was held here and established the ideological and political party building program.

The book "The Life of the Masses under the Government of Workers, Peasants and Soldiers in Western Fujian" states: "In addition to the young and old, the strong men and women of the Red Army, the reserve army of the Red Guards, and the young vanguard, among the millions of revolutionary masses in the entire western Fujian. More than 10,000 people."

In October 1934, the Ninth Army of the Chinese Red Army of Workers and Peasants embarked on a 25,000-mile journey starting from the "farthest place" in Zhongfu Village, Changting County.

The main Red Army participating in the Long March had 26,000 children in western Fujian, but only 2,000 were left when they arrived in northern Shaanxi.

The Battle of Songmaoling and the Battle of Xiangjiang have witnessed their bloody loyal souls.

During his work in Fujian, Comrade Xi Jinping made several investigations in western Fujian.

From January 8 to 12, 1999, Xi Jinping, then deputy secretary of the Fujian Provincial Party Committee, braved the severe cold to travel to Longyan, an old district, and went to more than a dozen towns in Wuping, Shanghang, Changting, and Silla, and visited the Fujianese revolutionary predecessors. The hometowns of Deng Zihui, Chen Pixian, Yang Chengwu, Liu Yalou, Deng Liujin, and the former site of the Central Red Hospital where Fu Lianyun was the dean, offered condolences to the old Red Army, revolutionary "five old" personnel, and the destitute people.

The people in the old district warmly welcome Xi Jinping and his party.

Some old Red Army members specially put on the military uniforms of the year and put on merit medals, and some revolutionary "five old" personnel also took out medals and honor certificates that have been treasured for many years.

On behalf of the Fujian Provincial Party Committee and the Provincial Government, Xi Jinping issued condolences to them and presented the "Founding Ceremony" New Year pictures.

When the painting was unfolded and the historical picture of Chairman Mao announcing that the Chinese people had stood up slowly appeared, many old people had tears in their eyes.

While working in Fujian, at the request of Xi Jinping, Dengcuo Village, Dongxiao Town, Xinluo District, Longyan City solved the problem of inaccessibility of water in the village in just a few months. More than 300 households in the village drank tap water.

Xi Jinping has visited Changting five times for investigations and continued to promote local soil erosion control; after working in the central government, he twice made important instructions, emphasizing that "if you enter, you will win, if you do not advance, you will retreat", and continue to strengthen the control of soil erosion in Changting. .

After serving as general secretary, Xi Jinping has remained as concerned about the old districts of western Fujian as ever.

During the 2014 All-Army Political Work Conference, the General Secretary had a discussion with representatives of the old Red Army, military martyrs and other representatives in Gutian, Fujian. The establishment of the Communist Party of China, the building of the Party, and the building of the army have made important irreplaceable contributions." "We must never forget the old districts, and never forget the people in the old districts."

In March of this year, General Secretary Xi Jinping mentioned the future development of the old area again during his inspection in Fujian. He pointed out that it is necessary to promote the comprehensive revitalization of the old Soviet area and fully support the upgrading of characteristic industries, infrastructure construction and public service guarantee in the old Soviet area.

Keep in mind the entrustment, forge ahead in development, and the old district of Minxi embarked on the fast track of development.

Nowadays, on the land of 19,000 square kilometers of western Fujian, there are exciting scenes of development in the new era: Zhongfu Village, which was ruthlessly destroyed by the war, has become a well-known new socialist countryside, focusing on the development of ecological agriculture and red tourism. The new format of e-commerce, with an average daily reception of 3,000 tourists and a comprehensive tourism income of more than 10 million yuan; Xinquan Town, Liancheng County, where the Fourth Red Army launched the "Xinquan Training", is vigorously tapping the core of red resources, creating red cultural industry projects, and driving The coordinated development of hot spring tourism and recuperation and catering industry will bring the town’s total social product value to 2.033 billion yuan in 2020; Shanghang Gutian promotes the integrated development of “red and green” and vigorously develops the “three reds” industries of red tourism, training, and research. It is expected in 2021 The number of tourists received will exceed 5 million, and the comprehensive tourism income will exceed 6 billion yuan. After years of continuous management, the soil erosion rate of Changting has dropped from 31.5% in the mid-1980s to 6.78% in 2020, realizing a "barren mountain-an oasis". ——Historic transformation of "ecological homeland"...

People living in this red land use red as the background color for development and continue to work hard on the road to revitalization.