"Promising region": how Russia strengthens its position in the arms market in Latin America

Latin American countries are interested in Russian aviation, air defense systems and armored vehicles. This was announced by Anatoly Punchuk, Deputy Director of the Federal Service for Military-Technical Cooperation (FSMTC). According to him, today “practically the entire line of Russian equipment” is in demand in the region. Along with this, Rosoboronexport said that the Latin American states need to modernize the previously supplied domestic weapons. According to experts, Moscow has good opportunities to expand its presence in the arms market in Latin America. 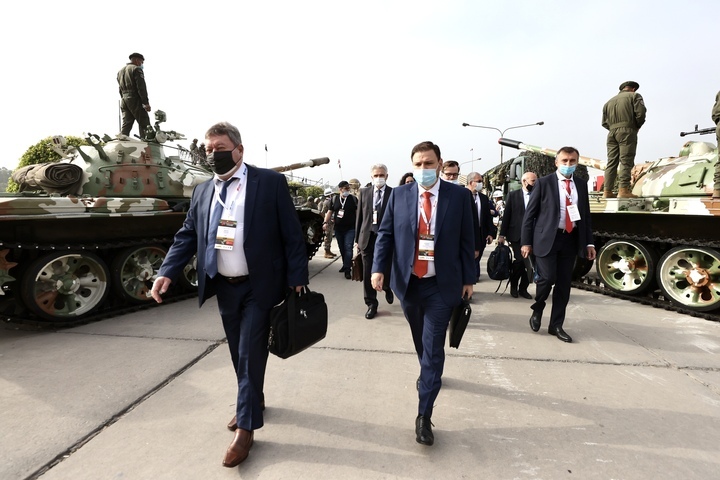 Latin American states are showing great interest in the products of the Russian defense-industrial complex (MIC).

Anatoly Punchuk, Deputy Director of the Federal Service for Military-Technical Cooperation (FSMTC) of the Russian Federation, told TASS about this.

“Today, the countries of the region are in demand for almost the entire range of Russian equipment.

At the same time, the greatest demand is for aviation equipment, air defense systems and armored vehicles, ”Punchuk said on the sidelines of the SITDEF-2021 international arms exhibition in Peru.

According to him, among the aircraft of Moscow's partners in the area of ​​military-technical cooperation (MTC), they are mainly interested in MiG-35 and Su-30 fighters, Yak-130 combat training aircraft, Mi-171Sh, Mi-17V-5 and Mi 35, short-range and medium-range anti-aircraft systems, UAVs and anti-drones.

Punchuk also spoke about the imminent completion of the construction of a service and technical center for the maintenance and repair of helicopter equipment in the Peruvian city of La Jolla.

The facility should be commissioned by the end of this year.

“According to our estimates, the launch of the center and bringing it to full capacity will be of great help for Peru in maintaining the country's helicopter fleet in good condition.

In addition, in the future, the center may receive the status of a regional center, taking into account the number of Russian-made helicopters operated in the Latin American region, ”Punchuk noted.

The SITDEF-2021 Forum opened on October 28 in Lima on the territory of the General Staff of the Peruvian Ground Forces.

192 companies from 27 countries take part in the exhibition.

The joint exposition of Rosoboronexport includes products of the Almaz-Antey concern, the Kronshtadt company and Rostec enterprises - the Kalashnikov concern, the United Aircraft Corporation (UAC), the High-Precision Complexes holding and other manufacturers.

In the form of models, Rosoboronexport demonstrates the Yak-130, the Mi-28NE Night Hunter attack helicopter, the Pantsir-S1 anti-aircraft missile-gun system and the BTR-82A armored personnel carrier.

This technique, according to the company, has "high potential in Latin America."

Rosoboronexport said that visitors to SITDEF-2021 would “undoubtedly be interested in” armored vehicles “Tiger” and “Typhoon-K”, anti-tank systems “Chrysanthemum-S”, “Kornet-E” (“Kornet-EM”), BTR-80A and BTR-82A, new wheeled combat vehicles K-16 and K-17, built on the basis of the unified platform "Boomerang".

Participants of the exhibition are invited to familiarize themselves with a wide range of electronic warfare (EW) and air defense systems, including the S-400 Triumph and Antey-4000 (anti-aircraft complex based on the S-300V4), Viking (export Buk-M3) , "Buk-M2", "Tor-M2KM", portable complexes "Igla-S" and "Verba".

“In addition, Rosoboronexport is ready to provide comprehensive information on the samples of Russian weapons and military equipment offered at the exhibition.

In particular, about the Su-35, Su-30SME and MiG-35 fighters, Mi-35M, Mi-171Sh, Ansat helicopters, as well as modern means of aviation destruction, ”the press service of Rosoboronexport said.

It is also reported that the company "Special Technology Center" is ready to provide information on the complex with unmanned aerial vehicles "Orlan-10E", which is "immensely popular among Russia's partners in the global arms market."

On the eve of the opening of SITDEF-2021, Rosoboronexport CEO Alexander Mikheev called Peru “a long-term and reliable partner of the company,“ successfully operating Russian aircraft and helicopters, armored vehicles and anti-tank systems ”.

Mikheev stressed that Rosoboronexport is ready to further develop mutually beneficial cooperation with the army, special operations forces, police and other law enforcement agencies of the South American country.

In late October, in an interview with TASS, the head of the company said that Moscow views Latin America "as an important and promising region of work."

According to him, Latin American states are interested in both new models of weapons of the Russian Federation and the modernization of previously supplied equipment.

In particular, Rosoboronexport conducts "intensive work" with Peru, Venezuela, Bolivia and a number of other states.

According to Mikheev, the countries of South America need to improve their combat aircraft fleet.

In this regard, the company offers services to modernize the supply of modern samples.

For example, as the CEO of a Russian company believes, the Latin American Air Force has a need for Checkmate-class aircraft.

Recall that this fighter was first presented in July at the International Aviation and Space Salon - 2021 in Zhukovsky near Moscow.

As expected in the UAC, Checkmate should fill the empty niche in the world market for a single-engine fighter at an "acceptable, economically justified price."

Recently, the region began operating drones from the Zala Aero company (part of the Kalashnikov concern).

Venezuela is considered the largest buyer of Russian military products.

Last September, the RAS journal Latin America published an article authored by Tatiana Alekseeva, a member of the Academy of Military Sciences, and Sergei Goreslavsky, director-at-large of Rosoboronexport.

According to researchers, since the days of the Cold War, the countries of the region have been striving to diversify the import of military products.

Such a policy helps to reduce the degree of influence of the United States, which often interferes in the internal affairs of Latin American states.

In the 2000s, as Alekseeva and Goreslavsky write, the states of the region decided how they should develop their armed forces.

According to the authors, at the beginning of the 21st century, Latin America turned into a "rather promising and capacious market" for the sale of weapons, including for Moscow.

“The main attention within the framework of the initiated processes for the modernization of military arsenals in almost all Latin American countries was (and continues to be) paid to the development of military aviation (combat, transport and training), as well as a multidisciplinary helicopter fleet,” the article says.

At the same time, as the researchers note, in some countries (Brazil, Chile, Peru) the so-called offset legislation is in force.

It prescribes the obligatory attraction of foreign technologies in a certain proportion to the volume of the supply contract.

Alekseeva and Goreslavsky believe that Russia with many years of experience in “effective application of various tools” in the military-technical cooperation sphere is able to satisfy the demands of the Latin American market.

A similar point of view is shared by Dmitry Burikh, adviser to the president of the Russian Social and Political Center.

In an interview with RT, he noted that the reliability, efficiency and reasonable cost of Russian military products are highly valued in Latin America.

“Yes, the arms market in Latin America is not as rich as the Asian or the Middle East, but the Russian Federation has a very good foundation for expanding its presence here.

At the same time, from his point of view, Moscow has no significant risks in the arms market of Latin America in the context of the ongoing US sanctions policy.

“In my opinion, the Americans can only threaten to block financial transactions.

But we see that Russia and its partners find safe forms of mutual settlements when concluding contracts on the MTC line.

And in cooperation with Latin America, I believe, the same mechanisms are applied, ”Burykh emphasized.